There are so many
variables that a critic can easily find something to object to. A Countess
short of breath in ìPorgi amor,î with which (no warm-up) she opens Act
II; a Cherubino too feminine for adolescent male outpourings; a Count
insufficiently virile for his masculine vanity (the engine that drives the
plot) to be credible; a Marcellina too young to be Figaroís mother
(Beaumarchais turns Oedipus into farce here, showing how close
tragedy and comedy really are); a lackluster conductor; a ìconceptî
staging that ignores half the plot; an ugly set; an incompetent fandango or
leap from the window ñ there is always (as Gilda Radner would say)
something. Attending the Metís Figaro in a year when few
world-famous names have signed on for it, the manipulator of the poison pen
whets his fangs in malicious anticipation.

At the matinee of November 10, the Met fooled me: until the last two
minutes of the staging (and then it was Jonathan Millerís unaltered
original direction that let me down, not anything the performers did), Le
Nozze was as near perfect as you are likely to get, and none of those
obvious lapses occurred. Anja Harteros sang both the Countessís arias
flawlessly and was, in addition, a radiant beauty whose neglect by any
husband puzzled everyone and made him look an oaf. She won the
ovation of the afternoon ñ even for one who missed the angelic quality Kiri
Te Kanawa brought to the Countessís final lines of forgiveness. (The opera
ñ and buffo in general ñ is primarily about forgiveness for everybodyís
human imperfections ñ which is why the original, imperial audience found it
easy to overlook the revolutionary subtext.) Ekaterina Siurina, a plump
Russian tidbit, as Susanna sang a radiant ìDeh vieni non tardarî and a
ìVenite, inginocchiateviî with the proper giggly bounce. Kate Lindsey is
a real find ñ her Cherubino looked like an adolescent boy, a very pretty
one to be sure but with an arrogant chin and a ìstreetî sort of strut
that made this cocksure kid a credible threat to the older males. She sang
gloriously too. Marie McLaughlin made an ardent but not preposterous
Marcellina ñ for once one regretted the omission of her aria ñ and
Anne-Carolyn Bird, though a bit tall, sang a sweet Barberina. 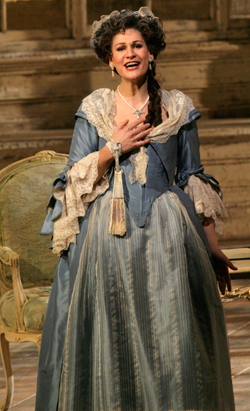 Anja Harteros as the Countess

Among the men, Bryn Terfel naturally stood out in the title role. I did
not like his Figaro when the production was brand new ñ he seemed so
anxious to show what an actor he was that he huffed and puffed and groaned
and grimaced instead of singing; Mozart took a back seat to Beaumarchais. He
has calmed down considerably over the years, and though still a bouncing
buffo-man with plenty of time for comedy (if his pretence of jumping off the
balcony is not quite believable), he now sings the arias at a less frenetic
pace, with more of the elegance they require and reward. Simon Keenlyside
played the Count as an elegant fop, forever tossing his curls and pratfalling
on the polished floors, but this never interfered with his musical authority.
Maurizio Muranoís blowhard Bartolo, Greg Fedderlyís slithy Basilio, and
Patrick Carfizziís lumpish Antonio earned most of the dayís laughs.

Philippe Jordan is a young Swiss who conducts with zest and delight, as if
he wanted to grab you by the ears and prove this is a masterpiece with charms
you never suspected ñ hardly necessary with Figaro, but what I
mean is, he takes none of it for granted, he is thrilled by the music and
eager to share. 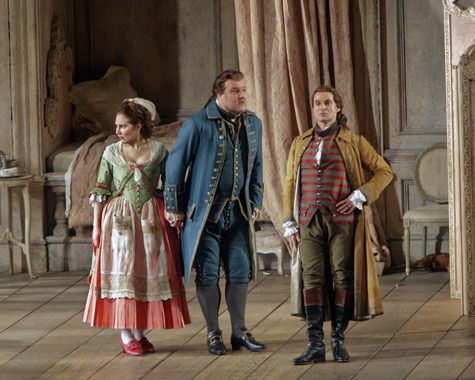 And what did I object to about the conclusion? In the Metís rush to get
the Countess into a new and glittery gown for the finale, no one has thought
(and Mr. Miller years ago did not think) to have her show the ring to the
Count, revealing to him that she is the mysterious lady he made love to in
the dark. The audience knows this, and Figaro and Susanna know it, but the
Count does not, and his heartfelt, aristocratic apology is inexplicable if he
doesnít. The laws of farce are immutable: If you do not tie all the knots,
the machine unravels. Itís such an easy piece of business to fix ñ and so
satisfying when itís fixed. Patch it up, Met.