(Shakespeare wrote the play, remember,
for James I, a descendant of Banquoís, a passionate believer in witchcraft
and the author of a book on demonology. Thereís no way to know how much of
this credence the author shared.) In the opera, the witchesí off-kilter
polka in the opening scene is peculiar but not exactly sinister; their
whirling waltz in the cauldron scene is not music for a ballroom but does not
stink of black magic. He does much better with the ghostly evocations of
bagpipes (bassoons and oboes) for the apparitions of the kings.

Stage directors tend to share Verdiís ambivalence (if thatís what it
was), and they have the additional problem of making sense of what modern
audiences no longer take seriously. In a recent production in Istanbul, the
witches were humorless demonic forces motivating all the wicked actions of
the opera ñ which I think is a mistake. Ludicrous witches, however, were
the great flaw in Adrian Nobleís new production at the Met ñ an enormous
crowd of bedraggled park bench ladies in ratty housecoats, clunky shoes and
socks, pin-on hats, and handbags wielded like the weapons of Monty Python
drag queens. Are they intended to be funny or eldritch? Though this is a
puzzlement Verdi may have shared, it seemed a desperate attempt to find a
modern equivalent in gooseflesh to Shakespeareís voices of Fate who vanish
into thin air. (The Metís witches do not vanish at all; they run
offstage.)

The scenes that tend to stump the average director stumped Noble as well:
Banquo the soldier vet sings his haunted aria to Fleance after acknowledging
the tramps gathered around a steel-drum fire; their casual friendliness then
turns inexplicably to menace. The omission of a forest of cut branches for
ambulatory Birnam Wood is regrettable. The sensuality at the core of the
Macbeth marriage is clear enough from their duets and complete trust in each
other; it isnít necessary to have every encounter conclude rolling into
bed. The Sleepwalking has been cued by Verdiís highly original choice to
have the Ladyís snatches of dream uttered while the orchestra plays ñ but
no one ever sings ñ the melody; this is undercut when the two witnessesí
interjections of horror come from seated psychiatrists observing the patient
from a therapeutic distance.

Nobleís production achieved most when it tried least hard. The gloomy
forest semicircling the stage area gave an appropriate mood to the tale, and
the sequoia-sized columns that move about to become Duncanís trapping
bedchamber or an imperial banquet hall (with the splendid addition of
grotesque chandeliers and grotesque choreography) are highly effective uses
of the Metís enormous stage. The blazing light show (probably only visible
from downstairs) that accompanies the apparitions is a thrill, as are the
mouthing faces in glass bubble monitors.

And the singing, you ask? Well, after Octoberís underpowered
Lucias (both casts), it was a great pleasure to hear five (yes,
five) Met-sized voices easily filling the cavernous theater. Maria Guleghina
sang a sumptuous ìVieni tíaffretta,î filling one with anticipation for
her Norma, but followed it with a cabaletta that was sloppily all over the
place to fill one with alarm at the thought of her as Norma. The coloratura
of the drinking song also lurched, but for this scene itís appropriate; she
acted the woman who loves being the life of her parties ñ and seemed
humiliated when the her husbandís hysteria ruined her moment. The murky
suspense of ìLe luce langue,î sung on her back on a couch as she idly
daydreams of power, curdled the blood, but the Sleepwalking Scene was a
distraction, delivered full voice as she histrionically clambered over chairs
and played with a rocking ceiling light ñ perhaps she can deliver this
climactic scene introspectively, with some exposure of character, but as
staged, it went for very little. 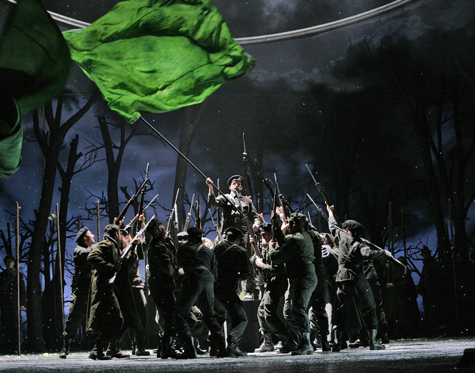 A scene from Act IV of Verdi’s “Macbeth.”

To Guleghinaís weird, wet and wild bra-popping Lady, éeljko Lu?i?ís
Macbeth made a contrast and a complement, brooding where she was flamboyant.
This is appropriate: action is taken by Macbeth, but only after long
consideration (and wifely exhortation), the great soliloquies state the point
of the play, of Shakespeareís essay on the self-destructions of ambition.
Stout and weary in formal clothes already drenched in the sweat of ghostly
visitations at his big party, he sits disconsolate, exhausted, an
impersonation of has-it-all-been-worth-it? success. Lu?i? has a voice of
true Verdian warmth and heft, though a few sustained notes troubled him. The
beauty of his singing underscored the tragedy here: Macbeth is not
intrinsically evil; heís an ambitious man who knows he is doing wrong but
cannot stop himself. Lu?i? should prove an elegant interpreter of many
another of Verdiís introspective baritones.

John Relyea, a bit young and sexy for a role that sounds and usually looks
patriarchal, sang an impressive Banquo. (He makes a sexy ghost, too.) Dimitri
Pittas, a New Yorker whoís been coming up through the Met ranks, sang
Macduff with a brash but interesting sound, a clarion Verdi tenor with a
youthful ping. Macduff, with his one aria and one-fourth of a finale, is a
popular spot for a not-yet-star-Verdi tenor to make a first impression, and
Pittas made it. Richard Thomas was impressive in Malcolmís few lines:
another bright, focused tenor. 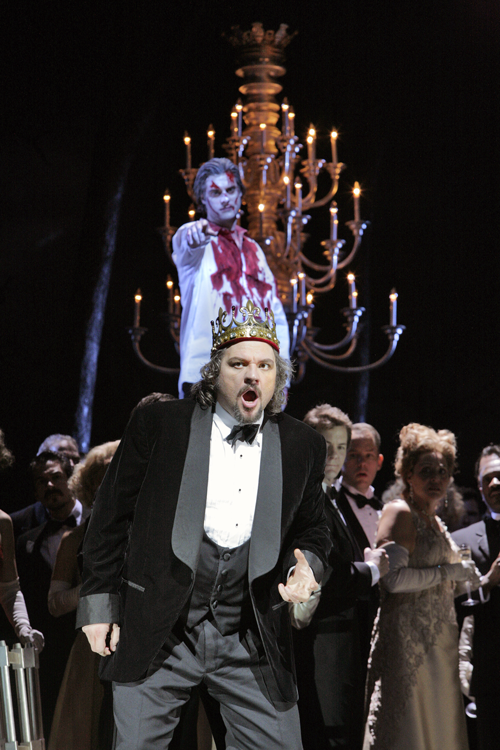 John Relyea as the ghost of Banquo and Zeljko Lucic in the title role of Verdi’s “Macbeth.”

James Levine is said to have campaigned for the new production of this
opera: the charm for anyone with an appreciation for Verdiís mastery, his
originality, in this breakthrough score was clear in his guidance of
its many shivery effects. My only objection was the battle fugue and the
ìbardicî finale, which did not sweep the theater with an arc of relief
as, after three hours of horror, they should.

Despite its imperfections, this was a production that (unlike the
Lucia) inspired me to wish to see it again. That will be possible in
May with very different singers, among them Gruberís Lady, Alvarezís
Macbeth, Papeís Banquo and Callejaís Macduff ñ and I wouldnít miss
it.