All you need is three (good) singers and a youth orchestra that, with a bit
of a squeeze, can be fitted into an estate car. Plus, of course, a starry conductor, a living myth
whose very presence on the podium is enough to make news. After several cancellations due to
his state of health, old glory Claudio Abbado is back again from a convalescence of two months
in sunny Sardinia, apparently in good shape and in a relaxed state of mind. On November 6-7, at
Bologna’s Teatro Manzoni, he led an all-Pergolesi recital inaugurating the extended celebrations
for the birth tercentenary of the ‘Neapolitan’ master, who actually saw the light of day on Jan 4,
1710, rather far from the Vesuvius: in Jesi by Ancona, then a part of the Papal States and a hot
district for opera. In fact, motors of the venture are the Jesi-based ‘Fondazione Pergolesi
Spontini’ (thus named for both composers, who were born only a few miles apart) and Bologna’s
Orchestra Mozart, since 2004 Abbado’s pet creature.

Halfway between chamber and symphony ensemble, the Orchestra Mozart includes some forty
instrumentalists aged 17-25, plus five experienced principals. A selection of 17 players —
budding professionals from several countries who are still practising, with some residual degree
of compromise as to strings and bows, on period instruments — tackled the Concerto in B flat
for violin, strings and continuo, one among the handful of instrumental works whose Pergolesi
authorship has been validated by recent research. Curiously, it’s written in a Venetian style
closely resembling Vivaldi’s; so Giuliano Carmignola, the concert master who ranks as a
specialist in the field, sounded quite at ease in his most familiar territory, despite a venial slip at
the very start.

Until this point, Abbado kept a non-committal attitude, mostly mirroring Carmignola’s tempo
choices with smiling nods and subtle gestures that seemed to highlight the structural framework
just for the audience’s benefit. He definitely took the lead in the following Salve Regina,
featuring soprano Julia Kleiter in the solo part. Though not an adept of flamboyant singing,
Kleiter commands crystal-clear uttering, fine legato, sensitive dynamic, precise intonation even
in treacherous chromatic passages (such as those found at ‘misericordes oculos’). Her weak point
resides in the passage to the upper register, ending in explosive high notes after a transient black
hole. 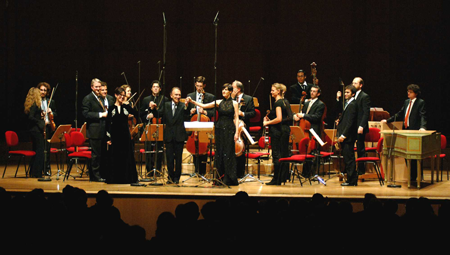 Two terrific primadonnas then stepped in for the celebrated Stabat Mater: soprano Rachel
Harnisch and alto Sara Mingardo. Widely diverse in their looks, the skinny, nervous Austrian
brunette and the motherly Italian newly donning henna-colored hairdoes and professoral
spectacles, share panache, deep understanding of the sung text and sophisticated technical
strokes. Harnisch, notable for her sustained clarion tones throughout, ignited trills and downward
appoggiaturas of penetrating dramatic strength, such as in the famed ‘pertransivit gladius’.
Mingardo deployed her bronze-polished centers in all their might, stretching down without
apparent effort to cavernous bassoon-like notes and then soaring backward to the highest peaks.
(A non-written cadenza in ‘Fac ut portem Christi mortem’ was particularly astonishing to that
respect).

Without ever stealing the show, Abbado kept the primadonnas together in strict duo textures,
while launching vigorous contrapuntal sections with his typical blend of passion and clarity, all
in the right places. The final chord in the ‘Amen’ fugue plunged the spellbound hall into silence
for a seemingly endless while. Ovations, stamping and (unfulfilled) calls for encores ensued. Yet,
after a moment of such perfection, little could be added to the experience.