With simple, repetitious but ravishing melodies, this updated story of
“La Traviata” (good-hearted courtesan finds and loses true — if impecunious — love) is almost
as rare as hen’s teeth.

In fact, the San Francisco Opera production opening tonight is only the second time it’s seen in
the War Memorial. There was a single performance in 1934 (and Spring Opera Theater
productions elsewhere in the city).

David Gockley took a chance on this cotton-candy Italianate Viennese-Hungarian operetta (the
best Franz Lehar piece he never wrote) about love in Paris, reviving it after a hiatus of seven
decades. The risk of filling the house seven times is ameliorated by engaging Angela Gheorghiu
to sing the title role in her San Francisco Opera debut — and, equally important, assembling a
very good cast.

Gheorghiu — a soprano of beautiful, soaring voice — sang heck out of the role, but the diva
also fit into an excellent ensemble. In the role of Ruggero, the man who takes the “fallen
woman” away from her comfortable den of cheerful depravity, Misha Didyk had by far his best
outing in the War Memorial. He has it all: a lyrical lilt, a strongly projected voice, in a seemingly
effortless performance.

The Nicolas Joel production, coming from London and Toulouse, is quite beautiful, with Ezio
Frigerio’s sets and Franca Squarciapino’s costumes. Stephen Barlow’s direction is misguided,
however, forcing artificial, exaggerated movements on the principals, taking away whatever
possible realism there is in the work. Gheorghiu and Christy especially overdid the frisky
ACTING at the beginning, Gheorghiu settling down in the second act, and creating a
dramatically more valid portrayal in the long duet that makes up most of the final act. 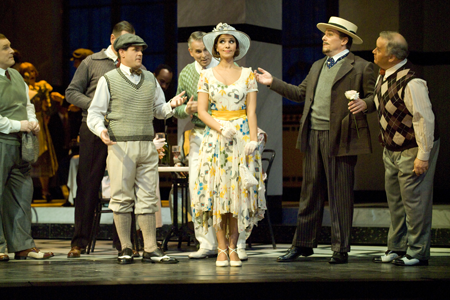 Overdoing is also the hallmark of Ion Marin’s conducting, those already large, sweeping
melodies made to thunder as if Walhalla went up in smoke in a misplaced Twilight of the Cafe
Society. In the few passages not written fortissimo, Marin’s hard-working orchestra stepped all
over the vocal lines.

And yet, the pleasantness of the score, the excellence of the principals’ performance, and the
likelihood that “La Rondine” may not come around again in this century add up to an easy
recommendation to attend the tale of the Swallow.

Click here for introduction to La Rondine by Gavin Plumley