Except they don’t. Except, that is, in Frankfurt Opera’s new production staged by Claus Guth and designed by Christian Schmidt, with imaginative costumes contributed by Anna Sofie Tuma.

Not that this is frivolously considered. It’s not. And not that it’s not very handsome indeed to look at. It is. Seldom has the famous Frankfurt turntable been used to better advantage than in swinging this elegant, white, two-level ship back and forth, always smoothly and soundlessly, revealing a suite, a bedroom, a first class bar, a hint of an open deck, a chapel, an imposing stair to the upper level, and a lounge. Messrs. Guth and Schmidt are seeking, nay stretching to find a metaphor here, and the unifying ideas they stress to be common to these three one-acters are, I believe, two:

Let’s add a third: In the midst of life we are in the midst of death. Or does this production team consider it the other way around? At one point in the evening, my colleague leaned over and summoned “Sixth Sense,” quipping: “I see Dead People.” There were enough ghosts floating around to people a decent revival of “Poltergeist.”

Back to the ship, just how much about those two “discussion bullets” above actually “floats” in the context of these one-acters? Truth to tell, not so very much. For the first act, Schmidt’s elegant setting was assuredly not the original milieu of the score’s dock workers and Seine denizens, and the honking and tooting of the industrial river traffic in the score seemed rather comically out of place with the surroundings. And what are those rough-and-tumble stevedores doing in a ship’s classy bar anyway?

This was due in no small measure to the thrilling “discovery” of soprano Elza van den Heever (“Giorgietta”). In her first professional appearances ever, Ms. Heever gave a star-making performance characterized by uninhibited acting, beauty of form, and a highly polished lirico-spinto sound that had a touch of metal in the big declamations. The opera world needs singers of her caliber and she should go far. She was well-partnered by the experienced “Luigi” of Frank van Aken, also quite a fearless performer, who commands a robust. well-schooled, if slightly muscular tenor.

“Michele” and “Giorgietta’s” beautifully voiced duet was imagined as a love-hate encounter that too created its own sparks. Among the white-clad spirit figures peopling each act was, in this duet, the couple’s dead Love Child, playing with a makeshift folded paper boat, moved portentously in and about the action. As “Michele” forcibly kept his wife wrapped in the cloak, the child got seamlessly trapped with the pair in the garment during, providing an unforgettably haunting, chills-inducing image. 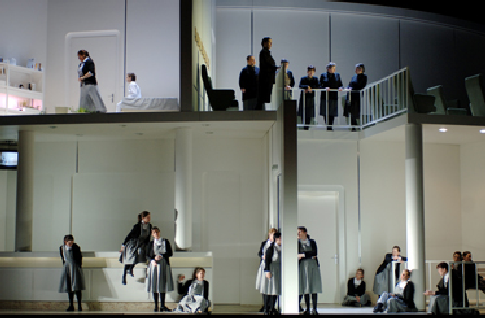 Only the critical fight scene when “Michele” chokes “Luigi” was rather meekly staged. Okay, okay, this is tricky stuff, with rapid fire “dialogue” that is not particularly well-timed in the score, and lots of scuffling required between baritone and tenor. Still, it appeared that our tenor was not choked, but rather “lapeled” to death. (“Nooooo, don’t go grabbin’ my lapels!! Aaaaaaaaaaaaaaaaagh, I am melting, melting, what a world. . .what a world. . .”)

No equivocation though that Zeljko Lucic was a first-rate “Michele.” This splendid “house singer” has gone on to great acclaim in the world’s most prestigious houses, including the Met’s recent broadcast “Macbeth.” That his success is deserved was evidenced on this occasion by a suavely sung “Michele,” no more so than in his big ranting aria near act’s end. He brought sound technique, burnished tone, and dramatic fire to bear in equal measure to forge a figure of profound tragedy. Later in the evening, Lucic regaled us anew with a wry, witty, expansively sung “Schicchi.”

Julia Juon is a treasurable artist who was a memorable “Frugola,” her little “cat arietta” giving much pleasure. She is perhaps too diminutive for the “Principessa,” and was not helped by being placed behind the bar for the bulk of her great scene. It made her look even shorter, and served as a real visual barrier to our connection with her arrogance and imperiousness. Too, her tightly focused voice is not the big honking baritonal sound that Maureen Forester and Marilyn Horne have brought to the part. With “Zita” she was on solid ground again, looking eerily evocative of Rue McClanahan in “Golden Girls.” Cagey, cool, elegant, steady and characterful of voice, this was nonetheless a wonderful trio turn for the popular Ms. Juon.

Longtime Frankfurt ensemble member Carlos Krause was a fully rounded “Talpa” as well as a delightfully scheming “Simone.” The drunken exhortations of “Trincula” were well handled by Hans-Juergen Lazar. Daniel Behle was a sweet-voiced “Song Seller” who would later prove to be a slimy and persuasive “Gherardo.”

Although “Tabarro” was shoe-horned into this concept, it still fully made it’s case. The gentle “Suor Angelica” had rougher seas to traverse. Again I gotta ask: Is there anything about this simple convent tale that “floats”? Or that can allow for the fact that a strict, reclusive religious order is inexplicably on a luxury cruise? Are these actually the Sisters of Perpetual Indulgence on a gay holiday? Whaddupwiddat?

The sweet little expository cameos of the rather anonymous and interchangeable sisters went for even less than usual. The setting here was such such a distraction that I spent more time wondering about the anachronisms than I did enjoying the overall wonderful singing and playing.

Within this ill-conceived framework, though, star soprano Danielle Halbwachs served notice that she is a wonderful, commanding, well-rounded artist. She sings with informed nuance, considerable power, and generous tone.

What she does not possess to my taste is a particularly Puccinian sound and therein lies a rub. “Angelica” is a character study (and nothing but) painted in a quintessential Italianate sound vocabulary. Not her fault, but where the voice should spin and gleam, such as in the upper reaches of the luminous climaxes, her technique only touched on the notes before fleeing to more comfortable lower reaches. The final floated high note of “Senza Mamma” did not come easily, and on this occasion, resisted focusing into the requisite finely spun filigree.

Dramatically, the director had her affect a cliched trembling hand a la Tom Hanks in “Saving Private Ryan” — quieted only by death. Truth in Reporting: All my reservations seemed to matter not one whit to the Publikum who received her rapturously, and, well, why not? Our diva did the vast majority of things right, and is a hugely talented performer. So talented that I would love to see her in other, more suitable roles of her core repertoire.

But what a sad mish-mosh “Angelica” turned out to be. Our Singing Nun seemed to have a sideboard/mini-bar in her suite that was very well stocked with herbs, weeds, seeds, Diet Coke (I made that up), and well, um, poisons. Huh? (See the problem here?) If Carnival Cruises ever offers this tour package, I advise you to pass on it. Or at least avoid the herbal teas. 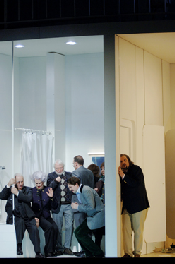 With “Gianni Schicchi” we were back in the realm of believability, although the paeans to the vista of Florence were certainly not credible. I have been there. Big ass cruise ships cannot dock in the Arno. But, save that, there is nothing inherently wrong about “Buoso” and “famiglia” being on this boat. Guth found much to revel in and nailed any number of comic moments.

In a startling revelation our “Lauretta” is shown to be pregnant. Whether the singer really is or not, the reveal at the end of “O Mio Babbino Caro” (competently sung by Juanita Lascarro) was a stunner, and it worked. The Pillsbury Doughboy “Rinuccio” of Massimiliano Pisapia was a real crowd pleaser thanks to an ample, pointed, veristic tone and well shaped phrases. Mr. Pisapia is a tenor to watch.

The entire ensemble of greedy relatives made outstanding contributions, not least of which was Nathaniel Webster as “Marco.” Angelina Ruzzafante, Franz Mayer, and Claudian Mahnke contributed sparkling jewels of individualized characterizations as “Nella,” “Betto,” and “Ciesca,” respectfully. Throughout the night the Frankfurt Opera Orchestra under Yuval Zorn played very responsively, although (as in “Suor Angelica”) occasionally with more passion than precision.

Perhaps the metaphor for the whole Ship of Fools concept came at the end of “Schicchi” when our leading baritone apparently shoots himself off stage. Shoots himself! I mean, Big Bang off stage, and he lumbers back on, bloodied, taking his ghostly time mounting the stairs, as a melancholy voice-over pronounces his final speech to the audience.

My Big Bang Theory? “Schicchi” went off stage and said “Oh damn, I have been playing this Florentine opera on a cruise ship! It’s the fifteenth century, for God’s sake! I’m a Fool! Onore! Famiglia!. . . .Bang!”

But seriously now, this was a terrific cast in a conscientiously considered, well-staged, musically sound production. The audience cheered it to the rafters. As for me, I admired the skills of the talented and earnest production team so much, that I would welcome the chance to see more of their work. Or. . . to see them put all these excellent elements into a more realistic production. Now there is a radical concept!

If not everything about this “Il Triticco” worked, it was still the product of a healthy and prolific artistic mind. I was always engaged, sometimes led astray, but always hoping to see more from this talented team.