The opera, for political reasons at the time of its composition, was not given its world premiere until last 2006 when it was given in concert in Montpellier, closely followed by its stage premiere in Mannheim in 2007.

Set in 16th-century Genoa, it inhabits the same world as Verdi’s Simon Boccanegra, though its dark and threatening atmosphere make it more reminiscent of Un ballo in maschera or La Gioconda. It certainly succeeds in evoking an Italian flavour more effectively than any other mid-19th-century French opera about Italy which comes to mind.

As the performance progressed, I wished I had familiarised myself with the synopsis rather more thoroughly at the outset. It seemed to be a tale of marital jealousy on one hand, and one of political intrigue on the other — with the two threads having little relevance to one another. Somehow I had missed the crucial detail that the wanton Julie, with whom the eponymous hero seems determined to break his marriage vows, is the daughter of the enemy and therefore a pivotal pawn in a political game.

Indeed, the dramatic structure of the piece is flawed; for example, the opening scene belongs to Fiesque’s wife Leonore, who is lamenting her husband’s apparent abandonment of her, but it’s then several scenes before she makes another appearance. There are a lot of characters, and so many plot details that it is very difficult to remember anybody’s motivation for their actions. To make matters worse, the plot hinges on Fiesque himself often acting in a seemingly erratic manner, which only adds to the confusion ñ in fact he’s acting for the greater good, but the audience don’t get let into the secret any sooner than his family or allies do. There is simply too much going on, too few threads holding it all together, and too much incongruity amongst the motley group of characters. 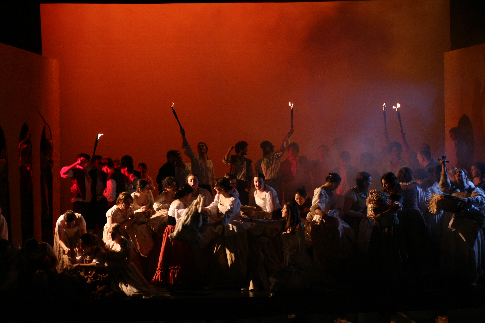 Emma Rivlin’s straightforward production serves it well, however, and UC Opera’s amateur forces (making up the chorus, orchestra and comprimario roles) gave the best performance I have heard from them in several years. Under Charles Peebles’s direction, there was little in the orchestral playing to remind the audience of the players’ amateur status. Similarly the chorus, made up of lots of youthful, amateur voices, may not have a traditionally ‘operatic’ timbre but produced an impressive sound. The chorus was well-directed, too, especially in the revolution scene towards the end, where the highly-charged atmosphere was palpable and everybody looked involved.

As for the professional principals, the male leads were, for the most part, very strongly cast: Robert Davies was outstanding as Fiesque’s political-ally-turned-nemesis, Verrina, and tenor David Curry gave an assured and polished account of the title role. Margaret Cooper’s Leonore and Alison Crookendale’s Julie both suffered from over-generous vibrato and one-dimensional character portraits (though to be fair, neither role has much to work with in terms of character development.)

Fiesque may not be a lost masterpiece, but UC Opera certainly made as persuasive a case for it as it is ever likely to get.