In a climate in which bel canto opera seems to be enjoying a steady and
welcome revival, ETO opened their current season with a welcome production of
Donizetti’s historically dubious account of the latter days of Anne Boleyn.
The company’s fine Maria Stuarda three years ago is still fresh in the
memory, and one wonders whether the company might be brave enough to complete
the ‘set’ with a staging of Roberto Devereux before too long.

The basic framework of Soutra Gilmour’s versatile set serves all three
productions on the current tour, and for this opera the set’s skeleton had
tapestry panels mounted upon it which slid in and out of place to create
different spaces and enable characters to conceal themselves from one
another.

In the title role, Julie Unwin grew in confidence and vocal security as
the evening progressed ñ at the start her tone, dynamics and vibrato
overpowered the musical line a little, but by the middle of the first act she
had settled into it and she gave a particularly convincing performance in the
lyrical moments of the later scenes.

She was, however, overshadowed by outstanding performances from two
colleagues: Julia Riley’s Jane Seymour was rich-voiced, elegant, poised,
passionate and credible ñ and although Luciano Botelho’s dryish tenor is
not quite beautiful, he made almost effortless work of Lord Percy’s
stratospherically high-lying passages. I suspect that this is one of those
roles which, when sung even half-decently, is guaranteed to bring the house
down ñ however Botelho really did deliver it with style and panache.

In fact, while most ETO offerings boast one or two particularly strong
performances, I forget the last time they fielded such a strong all-round
cast. Former ENO principal Riccardo Simonetti was a commanding Henry VIII,
while Jonathan Pugsley’s Lord Rochford and Serena Kay’s Smeaton were also
luxuriously sung.

Performing in an orchestration which suits the forces available (and with
several cuts to the score) the company has put together a fine orchestra this
time around, too, with some particularly good woodwind ñ Michael Lloyd
conducted. 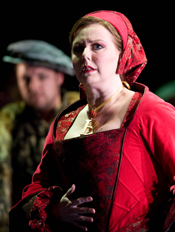 ETO’s decision to perform in the original Italian ñ a rare exception to
their usual English-language policy ñ was perhaps a wise one, as this
repertoire benefits from the Italian vowel sounds combined with the bel canto
melodic lines. However the scrolling surtitles were laughable, full of
misspellings and oblivious to what might unintentionally cause amusement. But
overall this is a creditable account of an opera which has been unjustly
neglected in the country from which it takes its inspiration.