The updated scenario presented the usual problems over how to deal with the
plot’s all-important class hierarchy, and although having the Don as a
high-ranking officer went some way towards solving the problem, the idea
wasn’t really followed through to create a coherent structure to accommodate
all the characters.

That said, it was the strongest of the three productions, directed by
Jonathan Munby, and was to all intents and purposes an uncomplicated,
gimmick-free staging, true to what Mozart and Da Ponte surely envisaged. The
very idea of having the Commendatore in a ‘statue’ costume and turning up to
supper seems to be oddly out of fashion these days, and tends to be passed
over in favour of a bloodied reanimated corpse or a drug-induced
hallucination invisible to the audience. But there indeed he was, played by
the bass-baritone Andrew Slater with a presence and strength which made it
easy to forget his rather youthful appearance.

Also refreshing was the casting of Jonathan Gunthorpe as a Leporello
similar enough in build and looks to his master to be mistaken for him on a
dark night with little suspension of disbelief. It helped that Roland Wood’s
Don Giovanni was played as more of a thug than a gentleman; even their voices
weren’t vastly dissimilar. But for the difference in the quality of their
wordly goods, they were practically interchangeable, and one suspected that
had Leporello been born into the moneyed aristocracy, the seeds of depravity
and insatiable lust might have had the chance to germinate in him as they did
in the Don. 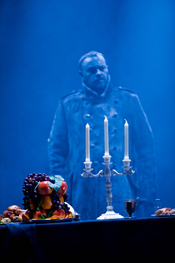 These two were vocally the strongest in the cast; all the others were
serviceable, though unusually for this company there were several foreign
cast members, including EyjÛlfur EyjÛlfsson (Don Ottavio) whose sung
English was particularly difficult to comprehend. As Zerlina, Ilona Domnich
also had some enunciation problems, especially at her first entrance (even
though under Michael Rosewell’s baton it was taken at a fairly steady pace)
but she had a graceful stage presence and sang both her arias attractively
and with opulent tone. Julia Sp¯rsen’s Donna Anna was an interesting
creation, too, combining fragility with noble determination and steely-voiced
coloratura.

The Prague version was used as the starting point with a few further cuts,
and Soutra Gilmour’s all-purpose framework set (shared by the other two
productions on the tour) was used here to its best effect, with attractive
deep blue latticed walls and backlighting.