I was hoping that a new production
at Torino’s Teatro Regio might change my mind. And indeed, their substantial
effort had many excellent components.

Angelo Sala’s handsome, angled colonnade unit (which would not have been
out of place on neighboring Via Po) may have initially looked a bit
slate-gray, socialist-utilitarian, but it was re-dressed handsomely (and
relatively quickly) for the several changes of locale, without at all giving
the impression that we were looking at scenery-on-the cheap Very simple but
highly effective, and well-detailed.

Lovely, too, were the sumptuous court costumes of Cristina Aceti, which
not only provided ample delights to dazzle the eye, but displayed a
well-considered color palette, from the opening act’s silvers, blacks and
grays, to the more colorful street and social life of Ferrara. “Lucrezia,” as
should be, looked every inch the alluring diva in some knock-out gowns. One
major slip-up was the unflattering gray schmatte that poor “Gennaro” got
stuck in. With his long hair and round face, in profile the unfortunate
effect was that he looked alarmingly like Mama Cass.

Andrea Anfossi’s lighting was sensitive, atmospheric, and well-cued.
Tiziana Tosco’s choreography was inventive and appropriate. So what more
could I want? Well, let’s see, more meaningful direction from Francesco
Bellotto would have been nice. Blocking was rather workaday routine, if not
downright obvious; characters did not relate to each other nearly often
enough; and for all the detail and inventiveness in the the design elements,
there was precious little on display in the histrionics.

Example: “Orsini” is given a goblet of wine (empty but we are meant to
believe it “full”) which he flails about indiscriminately, turning it upside
down at one point, then shortly thereafter we are asked to believe he is
still able to “drink” from it as he toasts and quaffs with his comrades.
There was scant attention paid to discovering nuances, or even fleshing out
the the big chunks to provide any substantially helpful dramatic support to
the music. 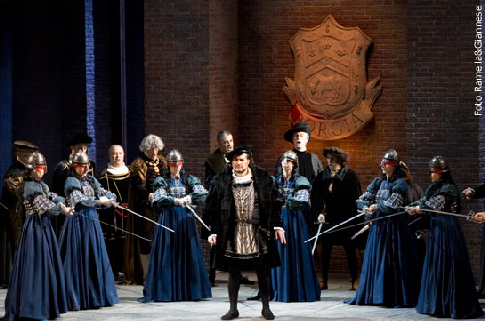 A scene from Act I

To his credit, even though he did not greatly illuminate it, Signor
Bellotto also did not get in the way of the sense of the story. However,
there was a “mysterious” young girl who covers the sleeping “Gennaro” with a
red cloth in Act I, then is carried on dead with grieving parents in tow in
Act II (ignored by all on stage), reappearing with the family in Act III to
block “Lucrezia’s” way as she seeks to get help for the poisoned “Gennaro,”
the girl later covering his corpse with the same red cloth. (Ooooooooooh)

Okay, do you get this? ‘Cause I don’t. Who are they? And do our characters
see them? Or not? Here today, gone domani? A consistent point of view might
have yielded a good dramatic device instead of another minor distraction.

Happily, on the musical side, Torino’s forces delivered the goods. I
originally went planning to see Fiorenza Cedolins in the Sunday matinee, only
to find she had been replaced. (I didn’t ask. This is Italy.) So, I opted to
swap the ticket for Saturday evening (can you imagine doing that at the
Met?!) to hear another soprano I have read a lot about: Angeles Blancas
Gulin. And I was quite glad I did.

Up front, the lovely Ms. Gulin’s singing will not please all tastes. I
have the feeling that, like the great Scotto, she has a full lyric instrument
with good point, that she is pushing to the limit, albeit often with
thrilling results. A beat crept into a few of the very top notes, and while
she did nail a climatic note in-Alt at Act I’s end, we (and she) might have
been happier with a lower option.

But she is indisputably a creature of the stage, prowling and hissing,
sparking and ranting, singing alternately with controlled beauty, hushed
introspection and inflamed dramatic declamation. Her impassioned portrayal
earned her a huge ovation, and ultimately she won me over and took me along
on her journey owing more to her total commitment and musicianship than to
her overall vocal production. Still, it is a rare treat to hear the piece,
and a joy to hear the role embodied so thoroughly.

Tenor Salvatore Cordella (“Gennaro”) was a stand-in for Raul Hernandez,
also not singing as announced (see above,
this-is-Italy-don’t-ask-don’t-tell). Mr. Cordella has a sweet voice deployed
with a sound technique, and he husbanded his resources well. However, there
is a difference between sensible pacing, and marking. And I felt our tenor
was so croony on so many passages that he gave the impression of feeling
over-parted, scaling back on the parlando passages so he could pour out the
tone convincingly on the money sections. A young man, experience may remedy
this effect and even out his vocal portrayal.

No such problem from our “Don Alfonso,” Simone del Savio. He is possessed
of a very substantial, warmly engaging baritone that has even production
throughout, admirable portamento, and plenty of presence. If the top notes
didn’t quite rattle the chandeliers like Milnes or MacNeill, they were
nevertheless well-focused and full-voiced.

Arguably, the vocal performance of the night was the knock-out turn by
Barbara di Castri as “Orsini.” From the first time she opened her mouth and
let fly with a phrase in chest voice that would have made Horne proud, this
was announcement of a major talent. It is true that she sang “just” under the
pitch in some of Act I’s higher reaches, but this vanished completely in the
remainder of the piece, as she claimed the stage at every moment with a
well-sung, committed portrayal of great power and vocal beauty.

The resident orchestra was in fine form under the sure hand of veteran
Bruno Campanella. Hearing these pieces played by Italians is most always a
revelation to me. They seem to effortlessly embrace this style, bringing
fire, artistry and excitement to even the most simplistic of melodic phrases,
and to the most trite of predictable rhythmic effects. More important,
Maestro Campanella and his band partnered their soloists with care and
sensitivity.

Overall, then this outing offered compelling music-making, excellent
production values, and non-offensive staging. While Act I of “Lucrezia
Borgia” may still fail to excite me, a musical reading as persuasive as this
could convince me to give it yet another listen. And with some loving
attention to character relationships, Torino could transform this “Lucrezia”
from merely a very good evening into a truly memorable night at the opera.