That version of a line from another opera I once saw at the Met expresses
my initial reaction to the return of the elegant Temur Chkhedze production of
Prokofievís The Gambler, based on the novella of addiction and
social dysfunction set in a fictitious German casino spa much like the ones
where Dostoevsky frittered himself into bankruptcy. In the Met production,
Roulettenberg is not so much a green baize casino as a four-story-high
pinball game, with great glass-and-metal towers to knock the balls back in,
flashing and spinning, lights, exploding horses and fireworks, a twirling
park for the characters to circle each other when not ìin play,î and a
crannied attic ñ which expands to the width of the stage as needed ñ for
our eponymous gambler to spend his time driving himself nuts with unrequited
passion, for both the lovely Polina and the equally whimsical game of
roulette. Itís not money heís after, really, this Alexei slouching
aggressively around town (in Vladimir Galouzineís mesmerizing, physical,
merciless star performance), or even Polina, really ñ itís the thrill ñ
of beating the odds ñ every sort of odds ñ lifeís odds ñ the class
systemís odds ñ the odds of Fate. Since that particular house cannot be
beaten, the story cannot end well. We hardly laugh when a bankrupt, lovelorn
General fires a pistol into his own head ñ the gun isnít loaded and
heís already dead.

Prokofievís opera is not melodious, even by the standards of his War
and Peace, which swept us off our feet when the Met revived it in
December. The Gambler has no big picture, no nations running riot on
the stage, and no glorious off-kilter waltzes to set the sensual scene. It is
a lithe, onomatopoeic score, a vehicle for a few great singing actors, and
the story is tightly wound. Alexei, a typical poor Russian intellectual,
works as a tutor in the family of a General, who has come to Roulettenberg,
supposedly to take the waters but actually to barter his lovely stepdaughter,
Polina, to a rich marquis in order to borrow enough money to win the hand of
the lovely courtesan, Madame Blanche, meanwhile hoping his rich mother-in-law
in Moscow will finally die and leave him her fortune. Tragically, the old
lady is in fine health, comes to town herself, and loses sixty thousand at
the wheel. Polina begs Alexei to acquire the money to save her from selling
herself on the marriage market, and in the spectacular set piece of Act IV,
he goes to the tables, breaks the bank and cleans out the town! Triumphant,
he gives the money to his adored Polina ñ and she hurls it back in his
face. Curtain. 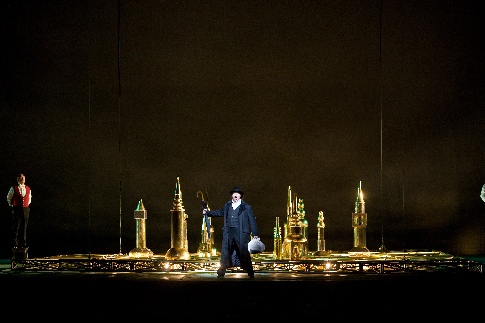 A scene from Prokofiev’s “The Gambler” with Vladimir Galouzine as Alexei (center).

Prokofiev wisely simplified Dostoevskyís ugly story. In the short novel,
Blanche carries Alexei off to Paris to teach him how to spend (her great
talent); but he enjoys nothing now except a gamblerís high, and returns to
the casino a hopeless addict.

The shadiness of these figures is the point ñ notice that none of them
are blood relations. In the 1870s, censors (and readers) would not have been
able to endure a story in which people sell their children or parents for
money, but stepchildren, adoptive parents and in-laws were fair game. Even
forty years after the novel appeared, when Strauss, in Elektra,
showed a family of blood relations hating each other, there was a scandal.
Then Freud let the cat out of the bag about families.

The Metís brilliantly staged, magnificently played, sparsely attended
revival is the swan song of Valery Gergievís immensely distinguished far
too brief career as the Metís co-music director, a period that has
introduced us to many wonderful, too-little-known Russian works with the
cream of Russian singers and a mixed bag of Russian directors to put them
over. It will immensely impoverish the Metropolitan, and the New York opera
scene (thickly inhabited with Russians these days, by the way) if these
works, and others we have not yet heard, vanish from the repertory and we
resume mediocre revivals of the thrice-familiar.

Promenading about George Tsypinís glamorous set these days (thrillingly
lit by James F. Ingalls), besides the extraordinary Mr. Galouzine, who plays
a crazed Russian as if he were, well, a crazed Russian (heíll do it again
in Pikovaya Dama next year, and you know? in Pagliacci, he
was the scariest Canio Iíve ever seen); Olga Guryakovaís plum-shaped,
sensuous tones as Polina; Larissa Diadkova as a far livelier (and audibly far
easier to take) Grandma than Elena Obrastzova was; and a great horde of Kirov
and Met regulars in smaller roles doing small but exciting things. This is
one of those operas where one is very thankful for the Met titles, as we
would otherwise miss a lot even if we were fluent in Russian (and Iím
not). 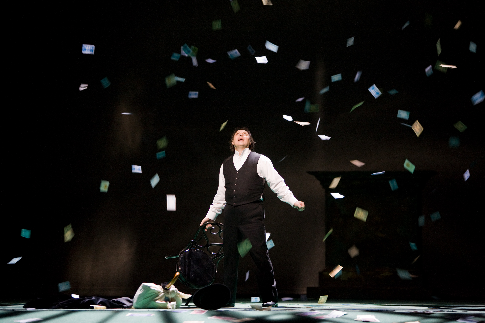 A scene from Prokofiev’s “The Gambler” with Vladimir Galouzine as Alexei.

An evening of theater at the Met that will wake you up.