It has been relatively well
served in America in terms of stage productions, but this was its UK
professional premiËre.

It was a shame not to see the auditorium full, as it’s the kind of piece
which people are inclined to find ‘easy’. Musically it’s attractive and
unchallenging, with quasi-Puccinian melodic lines combined with quasi-folk
tunes. It’s also a straightforward enough setting to evoke easily on a
shoestring budget and with a set destined for nine different venues; the
height of summer in the southern USA was conjured up most effectively with no
more than a few slatted panels and a backdrop of colourful, hazy
late-afternoon lighting.

James Conway’s production depicted New Hope Valley as a community which is
hypocritically selective of its moral battles, ready to torture a person for
any hint of extramarital sexuality but tolerant of routine domestic violence
and subordination of women. Most of the younger women were either carrying
babies or heavily pregnant; many of them also sported black eyes and other
battle-scars. Sandra Porter’s hard-faced, vitriolic Mrs McLean was a fitting
figurehead for a people who profess to live by the loving word of God but in
practice equate unquestioning compliance with goodness and unwitting
difference with moral corruption. There are echoes of Peter Grimes in the
willingness of a devoutly religious congregation to turn upon and destroy an
individual.

Donna Bateman gave a lyrical and vocally touching performance in the title
role. For Act 2’s wistful ‘Come back, o summer’ she created a moment of
highly-charged stillness which she never quite managed to achieve in the
opera’s best-known aria, ‘Ain’t it a pretty night’. But she never quite
managed to project Susannah’s crucial youth and innocence, and her words
became constricted and indistinct at the top end of her voice.

As her brother Sam, the American tenor Todd Wilander was powerful in both
voice and presence, as was the very young-looking Sean Clayton as the
backward Little Bat McLean whose false accusations under pressure from his
parents are the catalyst for Susannah’s humiliation, ostracism and loss of
sexual innocence. 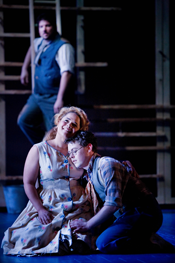 Andrew Slater (who returned the next evening as Mozart’s Commendatore) was
not particularly charismatic as the preacher Olin Blitch, but Floyd’s music
and director James Conway’s scene-setting effectively produced an atmosphere
of horrific tension in the revival meeting scene in which Susannah is put
under public pressure to repent of a non-existent sin. For me, it was one of
the most uncomfortable moments I can remember witnessing on a theatrical
stage. Slater seemed more comfortable with the demands of the next scene, in
which Blitch reveals himself as a lonely and needy person before taking
advantage of Susannah at a time when she has neither the strength nor the
will to resist him, and in his subsequent hopeless attempt to make right his
wrongdoing.

The atmospheric lighting and attention to detail (I liked the women’s
sunburned shoulders) were complemented by Alexander Ingram’s warm yet
dramatic conducting; though occasionally the balance wasn’t quite right and
the singers were overpowered.