The
Minotaur is a man imprisoned in a non-human body with non-human desires,
itself imprisoned inside a labyrinth, and his spirit is imprisoned by his
inability to use human language. Ariadne is imprisoned by being physically
stranded on Crete, and by the skeletons in her family’s closet. All ó
including the unfortunate Innocents who are delivered annually to Crete as
the Minotaur’s sacrificial prey ó are prisoners of fate. Birtwistle’s score
is based on various permutations of a single, inescapable melodic line
throughout, and Alison Chitty’s set is highly effective in its depiction of,
alternately, a shoreline surrounded by a sea and sky which constantly seem to
close in on one another, and a curved, claustrophobic chamber in the bowels
of the labyrinth.

Although they do not realise it, everybody has much the same standing in
this miserable situation. Asterios, the Minotaur, is Ariadne’s half-brother,
and in the opera’s version of events he is also Theseus’s ó David Harsent’s
libretto has it that the Minotaur’s bull-father, rather than being a familiar
of the sea-god Poseidon, was probably Poseidon himself in bull form. The
denouement has the Minotaur recoiling at the sight of Theseus’s face ó
partly at the recognition of him as the dark shadow who, along with Ariadne,
has haunted his dreams, but perhaps partly too as he recognises a human form
of himself. The Oracle has said that Theseus will triumph, so we all know it
is inevitable ó but in the final battle, there is a moment when the two
‘brothers’ seem absolutely the equal of one another. 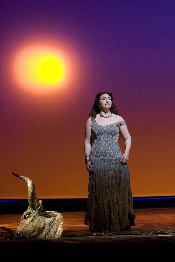 The piece focuses on the Minotaur far more as man than as monster, and the
situation leads even the ‘complete’ humans to exhibit animalistic traits ó
one of the finest pieces of choreographic judgement in Langridge’s production
is the moment where the First Innocent (Rebecca Bottone) finds herself flung
into the presence of the Minotaur. Stalked by the creature, she skitters
around the floor, legs flailing like a newborn fawn in the presence of an
inescapable predator, before being raped and killed. The distinction between
human and animal is less clear-cut than those outsiders who persecute the
Minotaur would like to imagine.

The title role has been written for John Tomlinson, an inspired piece of
dramatic visualisation on the part of the composer. Tomlinson’s singing,
wordless except in the ‘dream’ scenes, is muscular and imbued with pathos,
and he successfully conveys a suffering animal in his gait and stature. 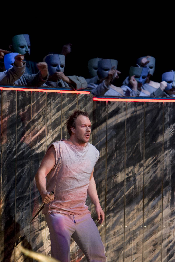 However, the opera at first seems to be about Ariadne, a tour de force for
the mezzo Christine Rice (though the character is sketchily developed
considering the length of time she spends on stage) with the focus shifting
to the Minotaur and his showdown with Theseus (Johan Reuter) later on. But it
matters little which way round the situation is seen, as these people are
inextricably bound together. Ariadne needs Theseus in order that she can
escape Crete (Theseus rejects her romantic advances, and their agreement to
return to Athens together as man and wife after the Minotaur’s death is
purely a business arrangement). Both Ariadne and Theseus need the Minotaur,
or rather a victory over the Minotaur, as a way of defeating their own
demons. The Minotaur needs Ariadne as his link with the outside world, and
Theseus as his release.

The Minotaur’s only company, if it can be referred to as such, is the
chorus ó faceless spectators at the heart of the labyrinth, forever hungry
for carnage and slaughter. They often speak in Ancient Greek, left
untranslated in the surtitles, so the audience is encouraged to share the
terrible isolation experienced by the Minotaur on account of his inability to
use language. 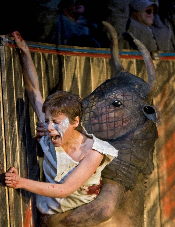 BOTTONE AS FIRST INNOCENT & TOMLINSON AS THE MINOTAUR

The piece is pervaded by a sense of primaeval inevitability, underlined by
projected images between scenes showing a slowly rolling slate-grey sea. This
creates a stasis which unfortunately has not been adequately addressed in
terms of its effect on the dramatic pacing, and the need to compensate for
it. The Minotaur barely moves, and is usually discovered standing still,
centre stage; the length of the scenes seems determined by the amount of
business that has to be got through rather than by any dramaturgical
calculation. The opera’s structure seems front-heavy, with the piece’s
natural centre being the extraordinary Oracle scene populated by the
monstrous, androgynous Snake Goddess (countertenor Andrew Watts) and her
Hiereus (Philip Langridge) who translates her incomprehensible pronouncements
for Ariadne and Theseus. It is the only scene which takes place in a location
other than the barren shoreline or the heart of the labyrinth, and it is
where the drama takes a step forward with Ariadne’s self-revelation and the
prophecy of Theseus’s success. This is in fact Scene 10 of 13. Although the
slow pace does succeed in throwing into relief the faster-paced sequences, it
cannot be overlooked that the opera is too long for its subject matter ó
the first part could be edited down by almost half, and the opera performed
in a single act with the Oracle scene in the middle.

There is clumsiness in the staging, too. Killings which should be
shockingly violent are trivialised by the requirement for each victim, once
‘wounded’, to run halfway off stage in order to be given a supply of stage
blood to enable their wounds to look realistic. It is left to the nightmarish
Keres ó black-winged vulture-like harpies who feast upon the entrails of
the dead and dying ó to provide an injection of sheer visceral horror,
scored with guttural shrieks and jagged rhythms.

With a near-perfect cast and Antonio Pappano at the musical helm,
Birtwistle’s new opera could hardly have been given a better start in life.
The work itself, and its promising staging, could do with a little revision
if a revival is to be attempted.