And there was certainly
vocal quality on display in all ranges at the first night of Lausanne
Operaís new production directed by Emilio Sagi, and supported by the modern
instrument Chamber Orchestra of Lausanne ó the latter bravely attempting if
not always succeeding in adjusting to the period style under the baton (and
harpsichord) of Italian Ottavio Dantone. The title role was sung by the
German Andreas Scholl, Tolomeo by Frenchman Christophe Dumaux, Sesto by Max
Emanuel Cencic and Nireno by Romanian Florin-Cezar Ouatu. Matching them in
the quality stakes were Elena de la Merced as Cleopatra, Charlotte Hellekant
as Cornelia and in the minor roles of Achilla and Curio, Riccardo Novaro and
Yannis Francois gave strong support.

In a time when productions of Cesare seem two-a-penny on almost every
continent, it was reassuring to see a full house at the distinctly
ìmunicipalî feeling Salle Metropole, where Lausanne Opera has temporarily
decamped to during renovations of the old house. This venue has, despite its
dreary appearance, some advantages for baroque opera ó a relatively small
space which suits the smaller voices and orchestras, and a compact stage area
that is easy (and economic) to dress appropriately. And dress it Sagi and his
designer Moreno certainly did, sometimes to excess when it came to the
supernumeraries of slaves, soldiers and dancing girls. There were moments
when the principals were in danger of being swamped by the waving arms (of
both varieties) of what appeared to be the entire roster of Lausanneís
staff performers seeking reason for this weekís pay-packet. Costumes were
elegant and exotic in a restrained way ó black torso armour and matching
flowing skirt-tunics for the Romans and long robes in white and gold for the
Egyptians.

The sets were pleasing, leaning heavily on a mix of black, gold, and
white, with just the right amount of generalised Egyptiana, and some creative
use of veils and gauzes to both illustrate and conceal the action when
required. Compared to some other recent productions both in Europe and the
US, it was the sort of creation that one would be happy to meet again anytime
whilst possibly forgetting in the interim.

However, what many in the audience will certainly not forget, nor forgive,
was the decision to do away with the usual two intervals between the three
Acts. This resulted in mass shuffling and fidgeting on the decidedly
municipale seating as the end of the nearly two hour long first half
drew near. Handel knew what he was doing pacing it the way he did, and
despite the swingeing cuts to arias, da capos and recitative that were also
imposed, it just didnít work in this format.

Happily, the singers were of a standard that helped to assuage the
discomforts. Andreas Scholl, in one of his rare appearances on the opera
stage (to date he only appears to sing this role and that of Bertarido from
ìRodelindaî), was back to excellent vocal form after some less happy
performances on the concert stage last year. His very distinctive, almost
instrumentally steely, tone was produced easily and without strain, and had
moments of real beauty. He will never be an actor, but in this small- scale
and busy production he wasnít required to hold the stage or eye for any
great amount of time and could concentrate on some admirable music making.
Best when allowed to just stand and sing, Scholl produced a clarion
Presti omai and a suitably sepulchral Alma del gran Pompeo
with some nicely judged colouring. Less successful were his interactions with
Elena de la Merced as Cleopatra where the sexual chemistry was non-existent,
and there was an oddly perfunctory-sounding Se infiorito. However,
all was redeemed when he stilled the house with an exquisitely shaped
Aure, deh, per pieta in the final half.

De la Merced as Cleopatra was something of a pleasant surprise in this
role, her normal stamping grounds being in the later worlds of Mozart, Verdi
and Rossini. She was a little hesitant at first but soon the voice bloomed
into an admirable, even feisty, Queen of the Nile offering dynamic variation
and subtlety, enabling us to believe she was both enthralled by Cesare, yet
still working the power game. An attractive slim woman with a strong stage
presence her teasing Non disperar was deliciously shaped with some
sparkling ornaments in the repeated A section, and her Piangero la sorte
mia was long-breathed and desolate. By the final scenes (cruelly
truncated in a way that made a nonsense of some of the libretto) she seemed
to tire a little and her Da tempeste was a little laboured – but no
doubt she will grow into this role if she wants to confirm it in her
repertoire.

Contrasting with Schollís rather awkward stage presence was the young
French countertenor Christophe Dumaux who took, yet again, the role of the
wicked and deceitful Tolomeo, and made it his own. Despite being hampered by
some silly costuming and spending too much time encased in a tall
gauzed-walled sedan chair like an enraged bluebottle, his body language and
dramatic sense were first rate. He rattled through the showpiece
Líempio sleale with panache and the requisite temper. His vocal
technique is firmly based, his tone round and centred, and if not a voice of
great beauty, it is certainly one of dramatic sense and great agility. He is
currently probably the Tolomeo of choice for many major houses. Sadly, much
of his music was cut and, after the battle scene, we never see him again ó
even his death at the hands of the young Sesto is merely briefly reported.
Handel intended that Sesto should avenge his father as a dramatic conclusion
to the whole story we have witnessed. We missed Tolomeoís blood on the
carpet. 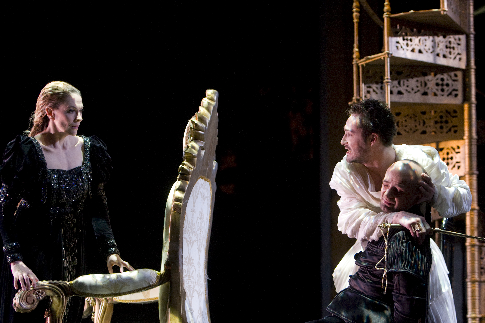 For some, it was the appearance of the much-publicised and promoted male
soprano turned countertenor Max Emanuel Cencic, in the pivotal role of Sesto,
which was the major interest of the evening ó following hot on the heels of
his well-received boundary-pushing CD of Rossini arias. Judging from that CD
and earlier ones, this was going to be a stratospherically exciting debut in
the same role that launched David Daniels to stardom at the Metropolitan
nearly ten years ago. Cencicís voice is again strong and firm-toned,
extremely well-schooled, and sits somewhat higher than either Scholl or
Dumaux. There was some vigorous and accurate coloratura on display, plenty of
volume for this small house, and some nicely judged long lines in, for
instance, the melodious Cara speme in which the very highest notes
were, for some reason, feathered rather than projected. What there wasnít,
at least on the first night, was much in the way of passion or tearing agony
ó either vocally or physically. Most puzzling of all was his almost
zombie-like non-reaction to the abuse and imprisonment of his mother Cornelia
ñnot a flicker of emotion passing across Cencicís face. For now, this
jury is still out ó finely honed recordings do not an opera star make.

The long suffering Cornelia was sung by the experienced Charlotte
Hellekant who replaced the previously-billed Stephanie díOustrac and made
as much as she could of a part that is always slightly fighting the
relentless doom and gloom of her music. She is well versed in this role but
on this night didnít quite rise to the heights previously accomplished.
Supporting the principals, Francois as Curio and Novaro as Achilla were more
than adequateñ the latter singing strongly with a nicely placed baritone
and obviously a local favourite. Strangely, Achilla was allowed to keep both
of his arias ó a puzzle when much more lovely music was being left by the
wayside.

To add insult to injury, the opera was also shorn of its final, redemptive
chorus, leaving us with the inevitable feeling of: ìis that all there
is?î Cutting oneís coat according to oneís cloth is understandable, but
not always commendable.