Almost as soon as the 2007/08 seasonís
details had been published, Angela Gheorghiu decided that the role of
Elisabetta di Valois was not for her after all and left Covent Gardenís
casting department the challenge of finding a suitable replacement. Soon
afterwards Rolando VillazÛn, the star Mexican tenor destined for the role of
Carlo, took a sabbatical on medical advice and cancelled a clutch of
international engagements including his planned appearance as Nemorino in the
Royal Operaís Líelisir díamore.

Anyhow, VillazÛn returned from his break, the company engaged its former
Young Artist Marina Poplavskaya as Elisabetta, the production sold out as
soon as it went on sale, and everything appeared to bode well. 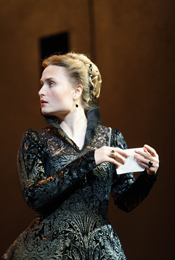 On the evidence of this opening night, VillazÛn is not yet back to full
vocal health. When he is on form, he delivers some thrillingly ardent
singing, but elsewhere he is frustratingly inconsistent with cracked notes
and intonation problems. The Fontainebleau scene was shoddily sung to the
extent that it was tempting to leave at the first interval. And VillazÛnís
nervy, angsty dramatic interpretation had a tendency to reduce the young
princeís struggles with forbidden love and conflicting political duties to
the petty tantrums of a moody adolescent. 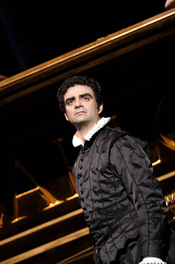 Poplavskaya is potentially a great talent (as evidenced by her outstanding
Rachel in last seasonís concert performance of La Juive) but sadly
the role of Elisabetta di Valois is really beyond her, at least for now. The
absence of a full Italianate lirico-spinto tone is perhaps not the
end of the world, but her obvious vocal fatigue towards the end of the
performance presents a serious problem in a role whose major aria takes place
in the final scene. The paleness of her pearly, ëcoveredí soprano is
matched by an onstage persona that is far too much the ice maiden, even in
the opening scene where we should surely be able to see the spark of youth
and vitality that has so captivated the impetuously youthful Carlo.

My comments thus far have perhaps made the whole effort sound disastrous.
Fortunately this was not the case. As Posa, Simon Keenlyside gave a
world-class performance; human, honest and noble. Ferruccio Furlanettoís
brittle Filippo and Eric Halfvarsonís terrifying Grand Inquisitor each
exuded such gravitas of presence that their confrontation was truly gripping.
The bells and oppressive Catholic glitz of the auto-da-fÈ scene
packed a real punch, with special praise due to the chorus, while conductor
Antonio Pappano seems to have the measure of the piece. 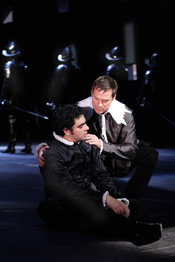 Sonia Ganassiís Eboli was decently-sung in a superficial sort of way,
with a big personality and lots of showy fireworks, but her voice and her
portrayal seemed to lack an emotional centre. Like VillazÛn and Poplavskaya,
her voice seems a size too small.

The production bears many of Hytnerís hallmarks: uncomplicated
situations and character interactions in front of handsome sets in colours
evoking the time and place of the setting. The intricate detail used in the
individual flats and costumes of Bob Crowleyís designs never takes away
from the sense of an elegant visual simplicity. The snow-covered forest of
Fontainebleau has a particularly elegant beauty. It is a good-looking, solid
staging, and eminently revivable; it seems churlish to complain that it plays
things rather safe. Hytner got some boos from the stalls on opening night,
which was quite baffling ó there were none of the usual triggers which
incite audiences to dislike a new production so vehemently.