It is set inside a giant television in America at some unspecified point in the 1950s or 1960s (though there are references to events spanning the past sixty years), one conceit of the production is that Candide’s childhood home is the White House, and his adoptive parents the President and First Lady. Voltaire’s imaginary land of Westphalia becomes ‘West Failure’, an overt joke at the expense of the US, and Pangloss’s unfailingly ‘optimistic’ philosophical teachings become an all-too-recognisable depiction of a country whose administration prefers to brainwash its younger generation into acceptance and support of its professed moral and religious values while employing questionable (and often downright hypocritical) ethical practices both at home and in its foreign policy.
The overture is accompanied by a film depicting various aspects of American life, principally the ëAmerican Dreamí. It was an inventive compilation with each new musical theme coinciding with a new theme in the film: the fast tune from ëGlitter and be Gayí, for example, took us to the glamour of Monroe-era Hollywood, and the splash of the final cadence became an exploding Coca-Cola sponsorship logo. We are then introduced to Act 1 by a cartoon Voltaire giving a wink and a one-fingered salute in the manner of a Monty Python animation vignette.
The deeply cynical operetta juxtaposes sunny innocence and the worst excesses of human darkness right from the start, with Pangloss and ‘Voltaire’ (both roles played by the singing actor Alex Jennings) blithely recounting the young protagonists’ encounters with military brutality, massacre and rape as though it were a natural progression from the privileged idyll of the opening scene. The characters hop from country to country, meeting appalling fate after appalling fate and somehow always coming out the other side. Almost all the characters have a surreal habit of surviving their own deaths on multiple occasions; all in all nothing much ever changes in the world, no matter how great the growth in wisdom and self-knowledge of its individual citizens.
Rumon Gamba’s conducting was often rather pedestrian, but the cast was reasonably strong. In the title role, Toby Spence was soulful and likeable, his boyish blond looks and clear tenor ideal for the gullible hero. In appearance and character he was well-matched by Anna Christy’s CunÈgonde, though the amplification system was unkind to her very focussed glassy soprano and she was often shrill (though at least her American accent is natural; the rest of the cast had varying degrees of success with theirs.) MairÈad Buicke’s Paquette was lively, and Mark Stone’s Maximilian was the most attractive voice on offer. Beverly Klein supplied the best all-round value as the Old Lady; her tango number ‘I am easily assimilated’ was the most successful set-piece of the evening, more so even than the more obviously showy ‘Glitter and be Gay’. 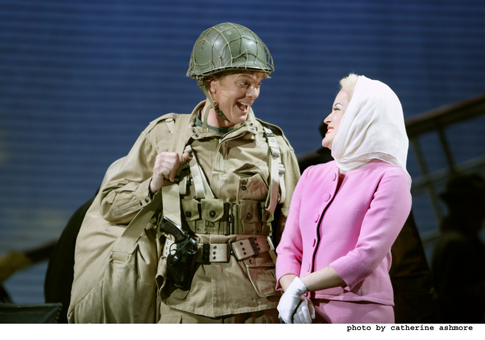 The main problem with the staging is that the concept ñ while supplying good value in terms of funny situations and surreal humour ñ rides roughshod over the wit and satire in the piece itself. A stab at 21st-century topical comedy ñ with a parade of five contemporary politicians lazing on inflatable mattresses atop an oil slick ñ fell absolutely flat, and should be consigned to the cutting-room floor before the production travels any further. Furthermore, the characters remained cartoonish and two-dimensional, and I never felt much sympathy for any of them ñ the plot relies upon each person being a blend of the positives and negatives of humanity. There were certainly a few real belly-laughs over the course of the evening, but ultimately it was a superficial affair.
Ruth Elleson © 2008