Walton and Christopher Hassall spent over six
years laboriously crafting the libretto from nuggets of Chaucer, Boccaccio,
and C.S. Lewisís The Allegory of Love. The musical idiom likewise
troubled Walton. He envisioned the opera as an heir to the bel canto
tradition, but worried about strains of Wagner, Verdi, and Strauss always
ìpopping their heads round the corner.î Casting problems dogged the 1954
Covent Garden premiere, and Troilus was ill-received at La Scala in
1956. Disheartened, Walton undertook major revisions for the 1963 Covent
Garden revival. More revisions followed in 1976, including the alteration of
Cressidaís original soprano tessitura into a mezzo-soprano vehicle
for Dame Janet Baker. Despite these efforts, today Troilus and
Cressida remains a relative rarity. Opera Theatre of Saint Louisís
glorious new production is the first since Opera North in 1995, and the first
American performance since the 1950s. Opera Theatre likewise premiered a new
performing edition of the opera, which incorporates a revised orchestration
and the original soprano tessitura. Beautifully sung and strikingly staged,
hopefully this Troilus will encourage more frequent American
performances.

In Behind the FaÁade, Susana Walton recalled her husbandís
lament that he never found the right voices to sing Troilus. The
role of Cressida particularly tormented him; Walton had written it for
Elisabeth Schwarzkopf, who never sang it onstage. Constantly trolling for the
perfect Cressida, Walton even briefly tried to interest Callas in the role.
Opera Theatre turned to gorgeous soprano Ellie Dehn, who truly dazzled as the
Trojan priestess. Her Act II aria ìAt the haunted end of the day,î
shimmered with mournful longing and finished with a gloriously resonant high
C. Cressidaís music has some creatively creepy moments, such as Act IIIís
ìO Tranquil Goddess.î Here Dehnís excellent breath control helped
delicately shape the piano high notes. The only vocal flaw lay in
her diction, which was sometimes seemed a little lazy. Dehnís greatest coup
was her magnetic stage presence, proving Waltonís dictum that Cressida is
the crux of the opera.

The role of Troilus was well served by Roger Honeywellís puissant tenor
voice, save a few oversung high notes. The quality of Troilusís music,
however, seems less consistent than Cressidaís. For Troilusís main Act I
aria, ìChild of the wine-dark wave,î Walton composed a soaring vocal line
with the standard love song signifiers of G-flat major and throbbing
triple-time. Yet for all its obvious charms, this aria falls flat, through no
fault of Honeywellís. Dramatically, Honeywell and Dehn were a compelling
couple, though Honeywell might tone down his occasionally histrionic
gestures.

Tenor Robert Breault was stellar as Cressidaís pandering uncle Pandarus.
His musical style famously parodies Benjamin Brittenís, with lots of
falsetto, melismas, and odd repetitions. Pandarus is hard to judge; on one
hand, he offers the only comic relief in Troilus and Cressida, and
Breault certainly deserved enthusiastic applause for his fussily cheeky
interpretation. On the other hand, I find a little of Pandarusís music goes
a very long way. By Act II, Breaultís well-executed melismas, such as the
one on the words ìembroidered satin,î just seemed annoying.

The orchestra did a fine job negotiating Waltonís complicated score, and
the revised orchestration certainly seemed both sufficient and transparent in
a hall this size. Many of the short string solos were lovely, particularly
Daniel Leeís cello solos in Acts I and III. Act IIís famous interlude was
properly full of yearning.

The sets and costumes were striking in their mix of austerity and
sumptuousness. Director Stephen Lawless turned to wartime London for
inspiration, particularly the claustrophobic ìbunkersî of the
Underground. Yet the stage looked less like the London underground than a mix
of Downfall and Desert Storm. To some extent, the mixing of the
modern and the antique is built into this opera, since Troilusís
original medieval story was transplanted to ancient Greece. The costume
designer followed this bi-temporal impulse, with Trojan soldiers in modern
metal helmets and the plumes of legionnaires. Cressida and Evadneís
beautiful Grecian dresses were covered with camouflage capes, and spears
freely intermingled with contemporary military netting.

At times extraneous stage busyness detracted from the otherwise
outstanding production. Walton consummated Troilus and Cressidaís union
with an extended ìpornographic interlude,î complete with action implied
behind a scrim. Opera Theatre staged this beautifully, with Troilus and
Cressida wrapping themselves in an enormous sheet and moving in suggestive
poses. Paired with Mark McCulloughís splendid lighting and the crashing
orchestral interlude, the onstage image was striking. Yet the directors added
random ìsidebarî interests during the interlude, such as someone being
tortured stage right, Pandarus milling about, and finally soldiers crawling
in to drag Troilus and Cressida offstage.

I was also mystified by changes to Troilus and Cressidaís
dÈnouement. It took Walton and Hassall years of furious debate to decide the
exact sequence of events, particularly concerning the deaths of Troilus and
Cressida. Eventually they settled that Cressidaís father Calkas would
traitorously stab Troilus in the back, causing the disgusted Diomede to
banish him to Troy. Left alone onstage, Cressida seizes Troilusís sword and
stabs herself to end the opera. In Opera Theatreís version, Calkas shot
Troilus in the back. More bizarrely, Cressida ran offstage in the operaís
final bars. At the final drumbeat, an upstage door opened to reveal
ìCressidaî hanging in effigy from the walls of Troy, strangled by her red
scarf. Not only did this significantly alter Walton and Hassallís vision,
the choice ultimately seemed to confuse the audience for no good reason. 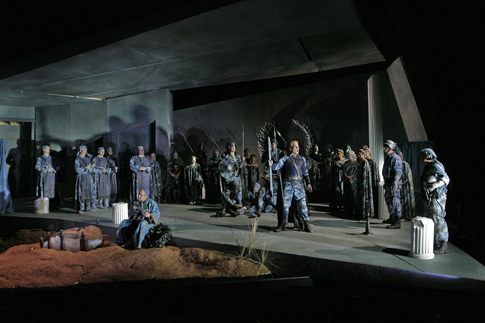 These performances of Troilus were particularly poignant for
Opera Theatre, given longtime Artistic Director Colin Grahamís passionate
advocacy of Waltonís opera. Graham directed Troilusís 1976
revival on a shoestring budget, and relished the idea of staging
Troilus in Saint Louis. Due to his passing last year, Opera Theatre
dedicated Troilusís run to Grahamís memory. Let us hope
Grahamís long-desired Saint Louis Troilus is only the first of
many new productions.