The label has always done well by bel canto operas, especially rarities. When the company ventures into the standard repertory, they put themselves up against the work of the world’s major opera houses. Sadly, their Lucia di Lammermoor doesn’t offer much competition to other versions of the opera on the market. But the Anna Bolena is another matter; though not attractively designed, the staging doesn’t interfere with an impassioned performance of the opera, a smash in its today but seldom performed of late. 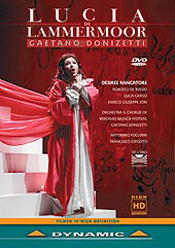 Both productions were filmed at the Teatro Donizetti di Bologna in October, 2006. Francesca Espositio directed and designed the costumes for both, with Italo Grassi in charge of the sets. Esposiito’s costumes are rich and traditional for both operas, though the Lucia males could use more variety – the tartan “shawl” thrown over the shoulders of the leads and chorus makes a monotonous picture. Grassi’s sets contrast with the familiar costumes by being stark. Most of Anna Bolena plays out in front of unadorned bleachers, with the odd touch of an oversized suit of armor, which looks like a miniature airplane hangar when lying flat. For Lucia, Grassi’s use of huge blow-ups of the plot’s letters and wedding contracts carries some dramatic weight, but the mad scene is woefully understaged. DÈsirÈe Rancatore , the Lucia, appears at the top of a roll-on white staircase, as from some cheap TV variety show. Instead of blood, she wears over her white nightgown a lengthy crimson robe. Apparently the budget didn’t stretch to giving the Edgardo his own setting; he sings the opera’s final scenes against that same staircase.

The cast simply doesn’t possess either the charisma or vocal authority to make this Lucia special. Rancatore sings decently, with clean attack and some color. The lack of glaring flaws doesn’t compensate much for the lack of individual phrasing or characterization. The audience roars for the Edgardo, Roberto DeBiasio, at the final curtain. A relatively slight man (for a tenor), he resembles a better-looking relative of the actor William Dafoe . He cuts a credibly romantic figure as Edgardo, vocally as well as visually. The audience’s enthusiasm seems excessive, nevertheless. Luca Grassi, the Enrico, has a thin, haunted look (and and De Biasio slightly resemble each other). The voice is substantial enough, but his acting tends to the unsubtle. Conductor Fogliani gets, perhaps unsurprisingly, an idiomatic performance from the Bergamo Musica Festival Gaetano Donizetti forces.

Fabrizio Maria Carminati conducts the same musicians for the Anna Bolena, which spreads over two discs. In the title role, Dimitra Theodossiou furthers her growing reputation with a fierce, technically secure performance. She is not a natural actress, and she looks a bit dowdy. But that works dramatically, as Anna realizes she is being replaced in the affections of Henry (or, Enrico) by Jane Seymour, a beautifully dressed Sofia Soloviy . The opera’s first act plays like exposition for the dramatic second act, when Anna realizes she must die to allow her husband to marry his new love. Riccardo Zanellato as Enrico has no opportunity to demonstrate the royal charisma; he’s more the villain of the piece. Tenor Gian Luca Pasolini doesn’t cut the dashing figure of the tenor in the Lucia, but his voice is much more appealing – a highly placed, very secure sound.

For lovers of bel canto, this Anna Bolena should be an enjoyable addition to any collection. The Lucia? Not so much.