The composerís first big success, Nabucco breathes fire in its lead soprano role, while elsewhere highlighting darker male voices. Il Trovatore, famously said to require the ëworldís four best singers,í bursts with so much melody that a highlights set seems like false economy. With Aida, the darker psychology and sharp orchestral color that would blossom in Otello and Falstaff appears. 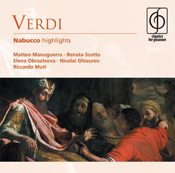 Renata Scottoís impassioned Abigaille dominates the Ricardo Muti-led Nabucco. In fact, Matteo Manuguerra in the title role is not heard until track 6, an ensemble at the end of part two. Perhaps CfP should have retitled the disc ìAbigaille.î Scottoís tendency toward some wiriness in her high notes plays to her advantage here, underscoring the characterís fierceness and ego. In the major bass role of Zaccaria, Nicolai Ghiaurov provides the other substantial voice to make this set worthy. Veriano Luchetti and Elena Obraztsova sing the roles of the young lovers, but the tenor and mezzo only briefly appear in the selections CfP provides. Muti, typically for him, drives the music with intensity and exactness, an approach that sometimes pushes excitement over insight.

CfP fills the Il Trovatore highlights disc with 70 minutes of music, and still it feels too brief. Surely the soldierís chorus could have been included? That quibble aside, a set as exciting, if occasionally manic, as this, should make any Verdi lover ask for more. Conductor Schippers does set some brisk tempos, but the visceral impact cannot be denied. Franco Corelli in his prime dominates the set, a truly heroic sound, not just in volume but in sheer masculine tone. Gabriella Tucci , in a rare plum recording assignment, sings an imposing Leonora, feminine and yet with a core of strength. Robert Merrill may not be in best form here – the ìIl balenî starts off somewhat stiffly – but the imposing quality of the instrument continues to satisfy. Rounding out a fine cast, Giuletta Simionatoís Azucena not only has the requisite tension and edge but also many moments of great beauty. On the assumption that finding the complete set of this recording may be difficult, lovers of this opera should find a way to grab this highlights disc. 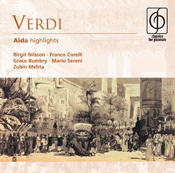 The Aida CD starts abruptly with Corelliís emphatic delivery of the recitative to ìCeleste Aida.î There has been some controversial over the diminuendo on the ariaís final note, but whether it was a trick of the knobs or authentic, the excitement generated is not fake. In 65 minutes, this highlights disc canít truly capture the expansive greatness of the opera – despite the inclusion of the confrontations scenes between Aida and her father, and then that between Radames and Amneris. CfP goes in for longer slices, with only 10 tracks. Itís good to hear Birgit Nilssonís Aida, her power wielded with tact and more than enough suggestion of pathos in her voice too (although sometimes that takes the form of suspect intonation).

Aidaís confrontation with Amneris is one victim of the music selections, which is particularly unfortunate considering how fine Grace Bumbry is in the role. Mario Sereni as Aidaís father makes less of an impression. Zubin Mehta leads the Rome opera forces in a performance as outsized as his two leadsí voices.

Your reviewer strongly recommends the Il Trovatore, but the other two sets have much worth hearing as well.