Under their director Ji?Ì B?lohl·vek, the BBC Symphony Orchestra (with reinforcements from Royal College of Music Brass) opened the concert with Richard Straussís Festliches Pr‰ludium, a fine choice of overture for such an occasion, grandiose but joyful.
In the Mozart Oboe Concerto (K.314), soloist Nicholas Daniel was bright, witty and full of personality, with some beautiful pianissimi in the slow movement. The orchestral ensemble fell apart at the seams a little on more than one occasion, but overall it was a delight, not spoiled by the half-hearted applause between movements from somewhere in the upper reaches of the hall (which went on to mar the Strauss which followed).
Next on the bill were Straussís Vier Letzte Lieder, with a change of soloist: an indisposed Karita Mattila replaced by Christine Brewer. Brewer sings with the BBC SO fairly regularly, and she was a radiant Br¸nnhilde (in Gˆtterd‰mmerung) last year at the Proms under Runnicles. Unfortunately, this time something didnít quite come together ñ there was no sweep to the phrasing and her top sounded shrill under pressure. Finally in “Beim Schlafengehen” she found some complexity and ëcentreí, and for a few moments she cast a rapt spell… before heading off into “Im Abendrot” in indifferent, fudged German.
Although the Proms offer an eclectic mix of music spanning the breadth of the Western art music repertoire, with the occasional foray into other genres such as jazz, ëworldí and folk, there are generally some threads to tie much of the season together. In particular, there is usually an attempt to celebrate significant anniversaries of composersí births and deaths, and one such occasion for 2008 is the centenary of the birth of Olivier Messiaen ñ indeed, the Frenchman is virtually omnipresent over the course of the season, featuring in twelve more concerts ranging from solo organ works to a visit from the Berlin Philharmonic with the TurangalÓla Symphony and a concert performance of the operatic magnum opus Saint-FranÁois díAssise by the Nederlandse Opera.
To introduce the upcoming Messiaen-fest, the second half of the first-night concert was introduced by Wayne Marshall on the Royal Albert Hallís mighty Willis organ in a fairly earth-shaking account of “ Dieu parmi nous”, the final episode from La NativitÈ du Seigneur.
Born just one day after Messiaen, the American composer Elliot Carter is still alive and ñ as far as I know ñ still composing, in his hundredth year. The UK premiËre of his CatÈnaires was perhaps the highlight of the concert, a four-minute virtuoso perpetuum mobile for solo piano showing off Pierre-Laurent Aimardís extraordinary ability. Prior to this, Aimard and the orchestra gave a light-footed and fresh performance of Beethovenís Rondo in B flat major. 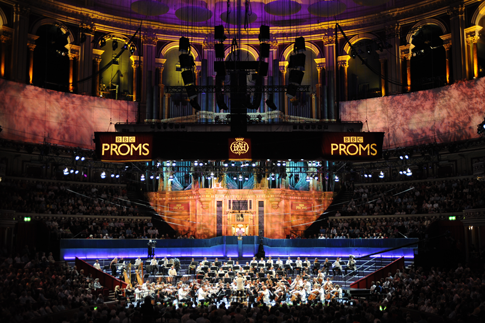 The Scriabin The Poem of Ecstasy, which concluded the evening was a well-chosen counterbalance to the opening Strauss ñ full of rich grandeur in brass and tuned percussion.
Ruth Elleson © 2008