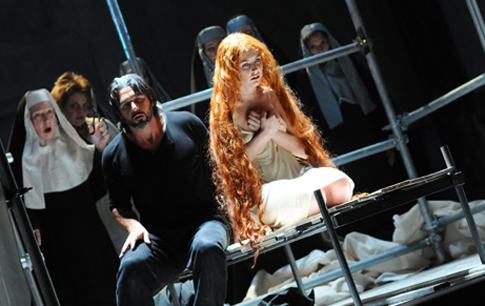 Also making a notable contribution were the still and video projections designed by Andu Dumitrescu. The larger than life dog, the pagan symbols, the lavish jungle, were all wonderful contributions. The titular demons were well suggested with unsettling video projections of a naked man and woman who were separately writhing and rolling in tortured contemplation each time the forbiddne fruit was mentioned.
Silviu Purcaretesí superb direction perfectly complemented the design and worked mightly and well in clarifying the story. Purcaretes elicited finely etched, honest performances from his first rate cast, and he managed the group scenes with imagination and efficiency. From the simple finger-snapping of the dance scene, to the complex gyrations of a Fellini-esque religious ritual, to the freeze-frame exit of the nuns evading the recently arrived possessed child, he infused the problematic adaptation with clarity, meaning, movement, and interest.
Not to say that the music was wanting or uninteresting. Emphatically not! There was much to enjoy, and some fantastic orchestral moments. While there were some familiar ìmodernî effects like lots of glissandi in the string writing, there were many unique touches such as the wind noises created aurally by the players. There was excellent variety within the various banks of instrumenets, and solos were well deployed. A prominent tuba solo late in Act II was phenomenal. The London Philharmonic Orchestra, who played remarkably the entire performance under Vladimir Jurowskiís inspired command, got the largest ovation of the night.
All told, there was some truly beautiful vocal and instrumental writing that fell easily and melodically on the ear. And then there were some miscalculations. Witness the high-high-high singing often asked of ìSierva.î Probably intententionally written to be sung as high as humanly possible, but why? And some of those leaps and plummets were just plain, well, gratuitous, unnecessarily ugly, and more instrumental than vocal in their conception.
There is so much that was so fine about ìLovers and Other Demonsî that I would hope the team would re-visit it. I would encourage them to re-look the exposition and invest more in the development of the complex circumstances and develpoment of the priest-girl liaison so that it does not appear to be merely male physical lust, as it does now. I would ask that they take a critical look at the over-represented minor roles that are distracting us from the central tragedy. And I would hope that the vocal personailty of the girl could be tempered to make her more sympathetic to an opera audience that, like it or not, enjoys a good tune or two with their dissonances. I would also look forward to seeing the work in a performance with a normal intermission as I thought the hour and twenty-five minute dinner pause really took the steam out of the momentum that had finally just started building.
Still the excellent cast, the flawless design, the compelling playing, imaginative direction, seriousness of purpose, glorious musical moments, and sense of ìeventî seemed to combine powerfully enough to sweep aside my reservations, as the composer was roundly cheered for his efforts. ìLovers and Other Demonsî is already a supremely interesting work. But I would enjoy seeing it become a great one.
James Sohre