This solemn statement, drawing from Italy’s
poet laureate Giacomo Leopardi, is ostensibly the key to Denis Krief’s
vision of Nabucco, unveiled last year as the inaugural show for the
85th opera season at L’Arena di Verona and now being revived from late
June to late August. By signing all alone direction, scenery, costumes and
light design, the French-Italian polymath provided a consistent, almost
austere, staging; one relying more on the clash of ideas than on traditional
melodramatic gestures. Jerusalem and Babylon, two hostile worlds, are
summarized by means of abstract symbols facing each other from opposite sides
of the stage. On the left, huge pentagons in white metal resembling a
library: Jehovah’s Word incorporated in long rows of books. On the
right, gilded cylinder slices boldly pointing towards the sky: the tower of
Babylon, obviously. As the conquering Assyrian king storms the Temple on
horseback — a real horse, Arena-style, and a pretty skittish one at
that — all the books abruptly fall from the shelves and tumble down to
the ground with an ominous roar. The Temple is then plunged into the dark,
with the Jews singing as if behind the bars of a multi-storied penitentiary.
No less destitute in their ankle-length grayish overcoats, Assyrian troopers
march to and fro along a steep platform stretching between both monuments.
Their queer parade-step, an operette-ish caricature of the German Wehrmacht
or the Soviet Red Army, conveys a touch of (unintentional?) humor, though.

After a first controversial reception from the popular outdoor audience,
this production is now being paid growing success. Pity that, right on the
first sold-out night on July 27, a meeting of stagehands called for a strike
in support to a fired colleague and pitch-black clouds were amassing over the
beautiful town on the green Adige river. “A stormy night at the Arena
— past GM Claudio Orazi once told me — amounts to a thrilling
experience. Challenging occasional downpours is part of the excitement, as
long as they don’t wholly disrupt the performance. A much seldom
occurrence, inasmuch we believe that a lucky star shines over the
Arena”. Yet at 9.15 p.m., when Daniel Oren raised his baton for the
overture, few among the 14,000-odd patrons filling the stone crater to the
brink would bet on a happy end. True, this particular production could not
suffer much from the desertion of stagehands. The books were not there, and
that was nearly all the damage. 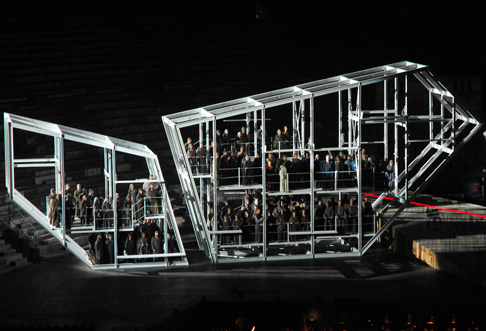 Scene from Act III of Nabucco

To make up for it, the acid colors and the gloomy atmosphere of
Krief’s lighting, that plunged most of the rear-stage into darkness,
were stirred by a continuous battery of natural flashes and rumbles from
above. Whether accompanying Nabucco’s acts of blasphemy, the
Jews’ hymn to “Immenso Jehovah”, or the fall of the idol of
Belo, such serendipitous effects conveyed a grandeur that no human director
could afford. Eight minutes past midnight, with the company still bowing in
return of applause, a gentle drizzle started falling, turning into a flood as
soon as the last opera tourists had climbed their coaches heading to
Switzerland, Austria and Germany — an amazingly tactful timing. As to
the music itself, a credible title-role was provided by Ambrogio Maestri,
equally royal in bodily appearance and breath consumption. His main opponent
Zaccaria (Paata Burchuladze) did not yield an inch and triumphed with
beautiful legato singing in “Dio di Giuda”. Maria Guleghina,
still an awe-inspiring Abigaille, was at her most affecting in her lyrical
and repentant moments, particularly in her final “Su me morente,
esanime”, while suffering from occasional strain at high-pitched
cabalettas, such as “Salgo gi‡ sul trono aurato”. Ismaele
(Giorgio Casciarri) and Fenena (Eufemia Tufano) sketched an elegant couple of
lovers, with uncommon bel canto potential and enough power to be
heard above the thunderbolts. The house’s chorus reaped wild applause
for its rendering of “Va’ pensiero”, once a battle anthem
during Italy’s independence wars against the Austrian empire. That
19th-century tradition lives on, as shown in the customary calls for encore,
this time full-heartedly granted by Oren. The mercurial Israeli maestro is a
welcome guest here. His nuanced touch is even more praiseworthy given the
dimensions of this unique venue; if only he could restrain from humming and
roaring into his microphone during the climactic orchestral
tutti…

A panoramic view of Nabucco.