Although it’s often labelled as a melodrama, Tabarro is more subtle than that ñ a study of unfulfilled, rootless people ñ and even besides the obvious orchestral sound-effects like the boats’ horns and out-of-tune barrel-organ, the musical scene-setting has an impressionistic colour palette unmatched anywhere else in Puccini’s canon. This strong and richly evocative raw material gives the opera an advantage in holding its own when scenery and costumes are stripped away and the piece is presented in concert form, as it was here.
Lado Ataneli’s Michele was a bit stiff ñ the traditional concert dress of white tie and tails really doesn’t encourage dramatic verisimilitude ñ but if anything this added to his portrayal of a man who has found himself the wrong side of an emotional barrier in his marriage. Barbara Frittoli conveyed youth more readily than the heavier lirico-spinto sopranos conventionally cast as Giorgetta, and she made a beautiful sound, remaining fully in character even when not singing. There was a warmth to her portrayal which gave a real sense of how out of place this young and passionate city girl is in her life of drudgery in the harsh world of the stevedores. Together, their vocal partnership was ideal; Ataneli’s baritone had a dry darkness which only blossomed into warmer lyricism during his plea for Giorgetta to spend the evening with him as in days gone by, while at the same moment, Frittoli’s expansive lyricism gave way to a colder, harsher delivery.
The Slovakian tenor Miroslav Dvorsky’s full-force singing ñ sometimes to the extent that he cracked fortissimo high notes ñ had a brittleness which suited the embittered Luigi.
The smaller, ‘character’ roles were luxuriously cast, with Jane Henschel as Frugola, Barry Banks as Tinca (hamming up the waltz scene for all it was worth) and Alistair Miles as Talpa. The programme notes gave the names in their literal English translations ñ Ferret, Tench and Mole. Allan Clayton as the Ballad-Seller and Edgaras Montvidas and Katherine Broderick as the young lovers all gave good lyrical value.
Prior to the interval, the curtain-raiser ñ which, although it is perhaps unfair to refer to it so dismissively, is how it felt ñ was Rachmaninov’s first symphony, a work which the 22-year-old composer considered a disaster at its premiere, and of which he remained deeply critical throughout his life. Here, after some fluffs and ensemble problems at the start of the opening movement, the BBC Philharmonic made a persuasive case for it; it had a propulsive energy and drive, and it is difficult to imagine any of the BBC’s other orchestras producing such a forceful and rich brass sound in the cross-rhythmed fanfares of the last movement. 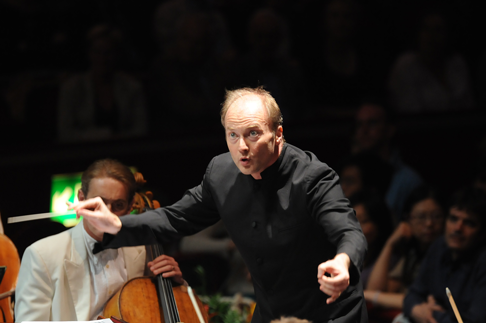 We had Gianni Schicchi at the Proms in 2004, also paired with a Rachmaninov piece ñ his opera The Miserly Knight (both performed by Glyndebourne Festival Opera). Is it too much to hope that Suor Angelica ñ which has never been performed at a Prom ñ might complete the triptych before too long? Perhaps, knowing the Proms’ preoccupation with anniversaries, we will have to wait another ten years until its centenary.
Ruth Elleson © 2008