In its third season, the Toronto Music Festival successfully produced
Richard Straussí bi-parte opera-within-an-opera, Ariadne auf
Naxos. Under the brilliant direction of Agnes Grossmann, also the
festivalís artistic director, an assembly of talented young performers, and
some more experienced ones illuminated the stage of the MacMillan Theatre for
a few hours of dramatically exciting and expressively stimulating music.

Ariadne began as a joint project between Strauss and
Hofmannsthal. Interestingly, the version that is now performed originated
from three separate ideas. As a result, there are two extant versions:
Ariadne I, in one act, to be performed after a German version of
MoliËreís Le Bourgeois Gentilhomme, and Ariadne II, in a
prologue and one act. In this version, Hofmannsthal and Strauss combined the
Ariadne myth with commedia dellíarte characters,
juxtaposed with 18th Century operatic stereotypes.

Although, Ariadne herself was a point of obsession for Hofmannthstal,
Strauss was equally focused on Zerbinetta, to whom he attributed a grand
scena di coloratura, equitable to the pyrotechnics in
Luciaís Mad Scene. The original cast included Maria Jeritza as
Ariadne, and Margarethe Siems as Zerbinetta. Equally enticing, however, is
the young composer of the opera-within-the-opera. The Komponistís intricate
text and singing in the prologue is not only telling of Straussí personal
connection to the character, but also lyrically masterful. 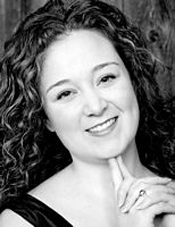 Melinda Delorme (Ariadne)
The TMFís production began with a well-effected instrumental opening and
intended musicality on the part of Maestra Grossmann and the National Academy
Orchestra. She delicately controlled the voicing of the orchestra, and
managed dynamic inflections and colorations with ease and precision. The
dynamic thrusts that are elemental in Strauss where well handled and the
orchestral palette was never compromised.

ìLonely Island Resort,î inscribed on large lettering facing the back
of the stage, and a resort lobby complete with a front desk, vacationing
guests, and a circulating revolving door, set the stage for the prologue. The
first scene lent itself to some fine singing by baritone, Gene Wu, who
produced good tone and well-inflected accento puro. The diction
coach for this production was Adi Braun, whose authentic instruction faired
well on the singers. The stage director, Titus Hollwegís design was
brilliant and never boring, in an opera that can sometimes lack if the
singing and inflection is not continually affective. This was not the case in
this production, however.

After the Major-Domo, portrayed by The Direction, announces that an
opera buffa will be performed after Ariadne before the nine
oíclock fireworks, the young composer arrives in hope of a last-minute
rehearsal. Dramatically performed by young mezzo-soprano, Erica Iris Huang,
the Komponist was convincing in his actions and expressiveness. Huang has a
golden tone that is equally beautiful in the lower and higher
tessitura, however, her intelligent shaping, and use of messa di
voce made the Komponist even more expressive and affective to the
audienceís sympathies.

After some kafuffles, the Major-Domo rings again to announce that the two
operas are to be performed ìsimultaneously!î Since such a combination
would certainly mean several cuts to the score, the Ariadne soprano
and tenor argue over cuts to their respective scenes. Soprano, Melinda
Delorme and Tenor, Steven Sherwood make their first stage appearances while
singing in a recitativo. Steven Sherwoodís diction was sometimes
unclear; although his voice has many promising attributes, he tended to
struggle with the overall tessitura of the role. Delorme expressed a warm
golden-orange hue to her soprano, and although she sang in
recitativo, it was evident that there was more to this voice, thus
causing greater anticipation for the opera-within-the-opera.

DÈsirÈe Till (Zerbinetta)
To try and resolve the situation, Zerbinetta, portrayed by soprano
DÈsirÈe Till, sets out to extract the details of the opera seria
from its author, charming him into compliance while calculating where her
comedians can best intervene. She is at least intrigued, though not remotely
persuaded, by the impassioned metaphysical gloss he puts on the story. Till
has a lovely clear tone in the higher tessitura, as is often the case with
present-day Zerbinette, even though the role is not specifically written for
a soubrette, but for a lyric coloratura soprano. While in North
America we have somehow misconstrued the soubrette as commensurate
to the lyric coloratura, historically, it is not the same. While Tillís
voice is promising, there was a significant lack of legato in a role that was
written to equate to Bel Canto aesthetics and the type of
fioritura produced by those aesthetics. Tillís exuberance and
dramatic aptitude was, however, illuminating and brilliant. One might have
liked to see her ìtrue selfî come through more affectively in her
almost-love-duet with the Komponist.

After Zerbinettaís tender moment with Komponist, Huang took center stage
once more, and fashioned some tender moments of passion and intensity. His
paean to ìholy art musicî is enough to touch any artist or music lover in
the most intimate way. Although Huang had some more difficult moments here,
contending with the orchestral palette in this section, she expressed a most
beautiful lower register and some truly lovely sotto voce moments.
In a brilliantly directed moment, the Komponist brings the orchestra into the
diegesis. While singing of the sacred nature of music, he motions to the
music that swells beneath him, gesturing to the orchestra, thus bringing the
orchestra out of the typical mode of accompaniment or harmonic scaffold and
making it a full-fledged character within the opera.

The opera Ariadne auf Naxos begins with a destroyed set from the
prologue, and Ariadne standing on what had been the front desk, complete in a
bridal gown and veil; behind her, an uncut wedding cake. A winding,
melancholy overture in G-minor, with an allegro of dismay and alarm
opens to the stage-within-a-stage. There were some unsteady moments in the
tuning of the violins in this overture. Ariadneís movements are spastic and
she expresses a heavy burden. Although Delorme was dramatically interesting,
the actions she effected asked for an even broader sense of abandonment.
Three nymphs appear, with exquisite costumes, and lament Ariadneís
inconsolable state. Dramatically and vocally apt, Anna Bateman, Ada Balon,
and Laura McAlpine gave solid performances. Until this moment, Straussí use
of the harmonium has been, more or less, a sustaining factor, but he now
entrusts piangente harmonies to the instrument.

The comedians appear with wonder at whether they can cheer up Ariadne.
Kudos to Christopher Enns, David English, James Baldwin, and Stephen Bell,
for their comical acting and competent vocal performances. Ariadne is
unaffected by the comedians, and instead begins to recall Theseus-Ariadne in
her soliloquy, ìEin schˆnes war.î Delorme finally demonstrated the
instrument that she had given us small-tastes of in the prologue. A
magnificent instrument, with spinto dramatic qualities, Delorme has
a bright future ahead. Her continual sense of legato and expressive lyrical
shaping left the audience excited for this young singerís future. Although
she had some inconsistencies in her sotto voce singing, the
full-range of her instrument is tremendous and illuminating. She possesses a
secure middle-voice and a very attractive tone.

The comedians are affected by Ariadneís lament, as is Zerbinetta, who
enters to convince Harlequin to try a little philosophical song. Baritone,
Neil Aronoff, has a lovely voice and although he had some difficulty in his
higher tessitura, he shows much promise and aptitude for lyrical
singing. Ariadne, of course, ignores him and continues her elongated lament.
The morbidity of her singing causes the comedians to jump into a
Biergarten-like quartet with a descant by Zerbinetta, who quickly
realizes that this has had no affect on Ariadne.

She sends the comedians away and addresses Ariadne herself,
ìGrossm‰chtige Prinzessin!î Zerbinetta tries to rationalize for Ariadne.
ìDo we not not all want each lover to be once-and-forever?î She recalls
her own collection of amorosi in a brilliant coloratura showpiece,
complete with recitativo, a couple of ariette, a
rondo with variations, and competing flute. While Till was
dramatically stimulating, her vocal production, here, was not as secure. She
presented some illuminating moments, but by the end seemed a little vocally
exhausted, which is understandable considering the difficulty of this
scena. Zerbinettaís music is a technical exercise and although
there were moments of inconsistency, the audience warmly applauded in support
of this promising young artist.

During Zerbinettaís performance, Ariadne withdraws into her cave,
refusing to listen. Perhaps this was Hofmannsthal and Straussí one error.
With Ariadne not present, the intended comic friction between genres is not
so evident and so the scene becomes an alternation of soprano styles, rather
than a confrontation. Zerbinettaís scena is followed by the
comedianís major scene, which was comically exciting and well performed,
leaving only Harlequin to win Zerbinettaís heartÖor favours.

Suddenly, the nymphs appear to announce the arrival of Bacchus. From afar,
his heroic tenor is heard, exulting from his escape from the
witch-seductress, Circe. Tenor, Steven Sherwood had significant difficulty in
this section, and although his voice shows promise, the high tessitura caused
much strain and an absent legato. His arrival on-stage was visually
spectacular, with a magnificent ocean-liner called the ìDewine,î crashing
through the stage-set and illuminating the stage with its gargantuan
presence. Bacchus stands in a stationary captainís suit, from which he
eventually steps down, and sings to Ariadne from above. At first, she expects
death, but seems to welcome Bacchus tentatively. Bacchus tells Ariadne that
he is a god and during their intense duet, she gives herself up to the
stranger sent from heaven.

Delorme continued to express her magnificent instrument in the duet,
although dramatically it left one aching for more raw passion and attraction
between her and Bacchus. Sherwood struggled throughout, but had some vocally
beautiful moments. The loverís voices entwine and raise up to an epiphany
in D-flat and the orchestra effects a pompous fortissimo, eloquently
manifested by Maestra Grossmann.

The end of the opera brought Ariadne onto Bacchusí ship and the return
of the prologue and opera characters, including the Komponist, who says
nothing but moves to express his affections for Zerbinetta, who finally show
her true heart in a gesture of reciprocation. Overall, the production was
successful and dramatically interesting. Maestra Grossmann kept exquisite
balance between the voices and orchestra; one was never an intrusion on the
other. In this production, Melinda Delorme and Erica Huang shone as bright
Canadian lights with promise for future operatic success.