What made it so
great? Well, for starters, the DNO had the excellent Netherlands Philharmonic
Orchestra in the pit under the superb leadership of Marc Albrecht.

One of the many assets of the Muziektheater house is that, with its
thrust-like stage, it is wide but not all that deep. And while the orchestra
never gets in the visual ìwayî of the show, the pit is somewhat shallow
and therefore affords an ìimmediateî presence that, with monster scores
such as Frau, seems to immerse the listener in the fabric of the
sound. This was further heightened by placing the ìoffstageî voices at
the finale somewhere behind the audience, enveloping us in those glorious
soaring pages like no other rendition I have ever heard.

But then, the band offered sensational playing all night, with evocative
reed work (all those bird cries so characterful, so anguished), a world-class
unaccompanied cello solo in Act Two (he got his own roundly cheered bow at
the top of Three), rich and throbbing string ensemble work, and some of the
best brass tooting this side of heavenís gates (especially the spot-on horn
section). The proximity of the players to us spectators allowed us to revel
in illuminating details of the score rarely heard with such clarity, even at
the Mighty Met.

But then of course, Straussís wonderfully varied and complex score
demands not only a virtuoso orchestra to make its effect, but also a
commanding conductor who can pull such a performance out of them. And this
DNO had in spades with Mighty Maestro Albrecht. Currently Artistic Director
and Chief Conductor of the Orchestre Philharmonique de Strasbourg, he is not
known that widely outside of a small musical axis in Germany and environs. He
should be. Make that ìhe will be.î Or even ìhe must be.î He and the
orchestra were the triumphant stars of the night, their ovation before the
start of each succeeding act growing in intensity until a veritable shouting
match of approval ensued at the final call.

On to the next ìstrengthî: the singers could hardly have been
bettered. As the Emperor, Klaus Florian Vogt, having just finished another
run of Waltherís in Bayreuth showed off all those qualities that I had so
admired in his Meistersinger: a clearly and evenly produced
instrument, with just enough heft and bite in the tone to ride the large
orchestra, but enough sweetness that you might yet want to hear him do one
more Tamino. And, he is young, strapping, and handsome to boot. When is the
last time you saw that whole package in this role?

My only regret about Terje Stenfoldís Barak is that it took me this long
to catch a performance by this fine baritone, who has spent much of his long
career in his home company the Norwegian National Opera. His rich
Heldenbariton never barked, was always ìeasy listening,î and had the all
the oomph needed to make this a memorable assumption. His charismatic smile
and youthful demeanor were totally engaging, making his darker scenes of
threatened violence even more powerful by contrast. 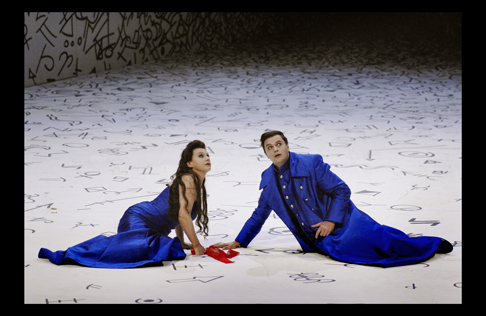 Veteran mezzo Doris Soffel should surely own the role of the Nurse by now.
If not I will put a down payment on it for her, for there seems to be nothing
in this treacherous and rangy role that eludes her. It goes without saying
that any successful interpreter must command powerful declamatory skills and
consummate dramatic insights (and boyohboyohboy does she ever have those!),
but what really took my breath away was her controlled legato singing,
especially at hushed volumes. Out of full rant, she could pull back to caress
a phrase with an unearthly beauty. Ms. Soffelís performance was a study in
pacing, technique, and a perfect marriage of her considerable talents with
explosive material.

Petite Evelyn Herlitzius packs a wallop belying her stature as the
Dyerís Wife. I encountered her Br¸nnhilde a few years ago in a Cologne
Gˆtterd‰mmerung and was impressed ìenough.î The reservations I
had then about her often metallic tone seem to have been addressed by time
and experience. Her voice has acquired a patina and good deal of roundness in
those intervening years, with no loss of fullness or precision. She hurled
herself into an impassioned performance that was one part bitterness, two
parts frustration, three parts desperate longing, and four parts loving
spouse. To me, the Wife has the greatest emotional journey, and she played
her sort of like a tomboyish ìUnsinkable Molly Brownî who loses the rough
edges of her brash youth and who tames her consuming ego to defer to a true
loving partnership. Ms. Herlitzius not only has the goods, she served them up
(very) ìspecial delivery.î

Even with having the last big solo scena, the Empress can sometimes pale a
bit in interest with the rest of these colorful and demonstrative stage
partners. Not so when embodied by radiant soprano Gabriele Fontana. There is
a glow in her generous, womanly tone that could in fact melt an
emperor-of-stone were it required. At the very start I thought she was maybe
working a bit hard, especially with the staccato leaps, all of which landed
but seemed more technical than musical. And then Ms. Fontanaís gifts just
took off and never looked back, pouring out one melting Straussian phrase
after another. I have heard this fine artist several times in this house, but
never to better advantage. 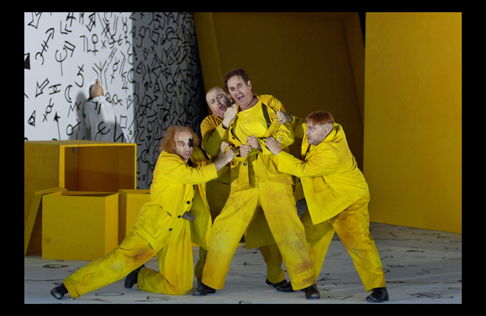 In smaller roles, tenor Jean-LÈon Klostermann was honey-voiced and
handsome as the tempting barefoot and bare-chested, white satin-suited
Apparition of a Young Man; and soprano Lenneke Ruiten was an effective Falke
among her other assignments. Only Peteris Eglitisís slightly under-powered
Spirit Messenger lacked the final vocal and dramatic fire that could have
made the most of his brief but important appearances.

On to the last ìstrengthî. . .well. . .let me just ask, when was the
last time you heard a production teamed cheered to the rafters? Really and
truly cheered? That it happened here was in response to the creation of a
beautifully contemporary and conscientious, not ìself-conscious,î work of
art by director Andreas Homoki, set and costume designer Wolfgang Gussmann,
and lighting designer Franck Evin. When the mechanics of the stagecraft so
ably partner the thrilling execution of the music and ennoble the intent of
the writers, this transcends the moniker ìRegie-Theater,î and becomes
ìMusical Theatre.î (Although new, it is based on a production in Geneva
in the early 90ís.)

I have had the privilege of admiring Herr Gussmannís designs once before
with DNOís memorable Capriccio, an intimate piece. The vast scope
of Frau demands so much more, and he has accommodated us with some
stunning visuals.

The curtain rises to reveal a giant white wall, floor to ceiling,
encrypted with well-spaced black hieroglyphics fronted by the Nurse (back to
us) who is attired in a white gown and flowing outer garment with similar
markings, her skull-capped head blended with white make-up, and sporting a
sort of Kabuki look (an appearance shared by all the serving ladies). When
she ìpartsî the thick wall in the middle, it reveals the basic structure:
a raked triangular stage backed by two sharply angled walls that converge
upstage, also white, with progressively denser ìblack-ro-glyphicsî as the
pattern moves upstage, ultimately becoming totally black where the walls
join.

This beautiful unit-set-as-work-of-art with its smoothly moving front
walls is effectively deployed with sort of old-fashioned ìin oneî
changes, where action is played in front of the closed walls while the unit
is re-dressed behind.

The Emperorís realm is dominated by giant red arrows that are impaled in
the set. At first, the regals (dressed in sumptuous midnight blue) are
discovered asleep under a lone red shaft. As his plight becomes more intense,
we discover randomly stuck arrows through which he stumbles blindfolded, then
later, a loose ìprisonî of arrows encloses him, and finally he is in a
tightly placed containment way upstage in the wallsí ìV.î What colorful
and meaningful abstractions these arrows are!

The commonersí realm is started off visually by only the revelation of
an enormous school-bus yellow box. Suddenly. . .BOOM. . .the front cover
comes crashing to the stage floor and reveals the inhabitants inside among
other varied yellow boxes which they proceed to place around the stage to
create their environment. The rude costumes appear patched together with
slight variations on the golden yellow, their signature color (and apparently
the only one they use for their dying).

For the journey to the Dyeî the Nurse strips the Empress of her blue
coat, revealing her in a strapless, fitted white-íní-squiggles variation.
When they disguise themselves, it is merely with the addition of a yellow
scarf (ìNî) and short fitted yellow jacket (ìEî). So simple, and yet,
enough that we believe. When the Wife gives up her shadow, she is surrounded
by gesticulating serving ladies who part to reveal her transformed into a
sort of ìwhite-ro-glyphicî cocktail dress with black farm boots and a
skull cap, resembling the Nurse.

This stunning reveal is surpassed by the instantaneous change after the
Empressís climactic ìIch will. . .nicht.î The Nurse had previously
removed her own long-sleeved cape-like covering and draped it on the Empress.
At this point the soprano struggles to keep the walls from closing, like
Samson between the pillars, and just as she cries out, there is a change to
dim back-lighting, she falls forward with a thud, the walls close, blackout,
the lights come right back up, and she is discovered prone in a gorgeous
midnight blue strapless gown. Magic.

Perhaps the best visual coup is the mysteriously ominous white globe (with
black symbols, natch) that descends at the end of Act II, retreats a bit in
Act III, then when the stage is cleared, lowers fully and centers in place at
the apex of the stage triangle to create a final memorable playing
environment. Is it a planet? A kingdom? Life force? Human egg? Riddle?
Deus ex machina? It allows us, and the characters, to speculate that
it could be anything, everything, or even nothing. Powerful.

Mr. Evin made a tremendous contribution with his well-judged lighting, not
only with effective isolations, but also with even and colorful washes well
accommodated by the white set. I had briefly wished that the stage floor
itself might have been black with white symbols which would have made the
shadowless Empress effect easier to achieve (yes, there were some fleeting
smallish shadows, but hey, we ran with it.)

All these dazzling visuals would mean little, had stage director Homoki
not displayed such an unerring instinct for good singer placement and
meaningful, well motivated movement. He used every inch of the stage with
imagination and variety. This Die Frau ohne Schatten was
overwhelming proof, should any be needed, that a production can successfully
be cutting edge, contemporary, and hip while still telling the story and
enhancing, nay respecting, the musical values.

This fine achievement gave me cause to reflect that in all the many years
I have seen selected performances in this house, I can count on one finger
the number of times I thought they missed the mark. Once! The Netherlands
Opera has an enviable history of compelling theatre; highly interesting,
vibrant, and polished. ìModernî art, yes, but not ìArtî without
regard to its audience.

Add to that the consistently high musical values here and . . .doink!. .
.this seems to be my favorite place to attend opera, beyond the ìShadowî
of a doubt.