FrÈdÈric Chaslin has, for some years, been juggling with the title Composer-slash-conductor. Appearing on major podiums around the world, this Paris-born maestro is looking to find a better balance for his two ambitions. Composer/conductors are more common than you might think – Bernstein, Furtwangler, and Mahler readily come to mind – and the list is extensive. A few years ago, Esa-Pekka Salonen took a sabbatical from his Los Angeles duties to devote the maximum time to his opuses. Others try to get something done during summer vacations.
Chaslin is looking to make a major mark as composer as he nears completion of his opera, *Wuthering Heights*, large parts of which he recorded Mid-September in Valencia, Spain. Chaslin, often composing on stolen weekends at his houseboat on the Seine, is looking to increase his composition time and is in the process of thinning his future appearances. “Look at (Lorin) Maazel and his first opera, 1984, which I rather liked,” he argued. “Now that he is in his 70s, did he wait too long to start? I’m now in my mid-40s and when do I start getting serious? Now I am in the process of trimming my future schedule to give me more time to compose.”
His new opera is unapologetically neo-romantic. He is on record with his belief that Twentieth Century classical music went off the rails into serialism and dense atonality. Even though he was, for a time, associated with Pierre Boulez (another composer/conductor) and the Paris contemporary music group Ensemble Intercontemporain, his book, ”Music in Every Sense,” takes modern music to task. “Music should always engage the audience,” he emphasized to me. The music for *Wuthering Heights* is so accessible that there was some debate at the inception of the project on whether to frame it as a “musical.” After most all has been committed to paper, he clearly sees it as operatic in every sense and the scope and drama of what was heard clearly support that view.
He has found a passionate advocate of the Emily Bronte novel in his librettist. Paula Heil Fisher is a writer, Broadway producer of musicals, filmmaker and head of Millennial Arts Productions who is developing this particular project. Clearly devoted to the classic novel of love and revenge she describes reading the novel as a child – one of her first novels – and the strong impact it had. She sees the author in all of the strong characters, an oblique protest against the limited power for women of Bronte’s time.
In the almost two hours of of music recorded in the spectacular Palau de les Arts Reina Sofia in Valencia, Chaslin found a “responsive, eager” house orchestra, the Orquestra de la Comunitat Valencia. Built with the help of Lorin Maazel, finishing his last season as conductor of the New York Philharmonic and Valencia’s current musical director, the top young talent (the average age is around 30) was selected from auditions around the world. This orchestra, only two years old, has already established itself as one of the more important in Europe. 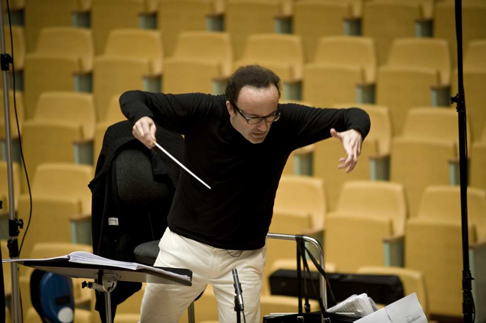 Young too are the leads, both of whom are ready for their close up. Long haired lanky American tenor Andrew Richards seems an ideal heartthrob as Heathcliff playing alongside the stunning young soprano, Olga Peretyatko, as Cathy. Both have already made waves on major stages, are very committed to this project and are names to note.
What chunks were heard during the two days at the recording session would certainly suggest the complete opera would likely qualify as a major event on the world’s musical calendar. The mature Cathy’s aria, the love duet with Heathcliff and the haunting music accompanying the Moor’s Chorus (with the London Philharmonia Chorus imported for the occasion) were particularly well-crafted and moving.
While the particularly lush orchestration during the arias will certainly be balanced in the recording studio, one can only wonder (as some of the singers do) how the balance will be achieved in the opera house. The reported three hours plus of music also might need some scissor application. However, walking to lunch, this critic, who has sat through uncounted new operas, was surprised to find him whistling a tune from the music. How often has that happened? I can’t remember the last time.
**[Editor’s Note: [This article first appeared in PlaybillArts](http://www.playbillarts.com/features/article/7759.html). It is reprinted with permission of Millennial Arts Productions, the rights holder.]**