“The
trouble with this book,” said the little girl, “is that it told
me more about penguins than I really wanted to know.” The cartoon comes
to mind as I assemble thoughts on The Bonesetter’s Daughter, the
opera by Stewart Wallace and Amy Tan that premiered at the San Francisco
Opera in September.

I jest, of course, for I am grateful for the immense amount of information
at my disposal about the new work that I saw at its third performance in the
War Memorial Opera House on September 25. My “homework” began
with Tan’s bestselling 2004 novel, from which the author extracted the
libretto for Bonesetter’s Daughter. It’s a large book
— and a good one, and I wish that everyone would read it before seeing
the opera. This is not to say that the opera is a series of sins of omission,
for Tan has ably done what must always be done in reducing a big book to a
libretto. She has worked with Wallace to create a work that, while new, is
faithful to the novel.

She has, above all, preserved the truth of the book, the truth that unites
three generations of Chinese women so seamlessly that they function at times
as a single individual.

With those lines daughter Ruth, ageing mother LuLing and Precious Auntie,
a ghost from an earlier China, open the score. They return in the course of
the work. 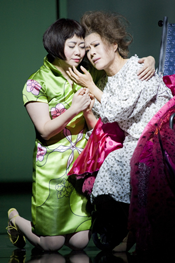 Reducing a novel to a libretto is an act of creative transformation, and
the challenge differs with each work. I think, for example, of Ricky Ian
Gordon’s Grapes of Wrath, premiered two seasons ago by
Minnesota Opera. The Steinbeck classic, I thought, would defy such
transformation. Wendell Korie, however, caught the epic sweep of the novel in
his libretto. Korie, Wallace’s librettist for Harvey Milk,
offered extensive advice to the creative team of Bonesetter’s
Daughter.

Rather than generalizing about the process of transformation, a comparison
of the task at hand says more about both operas. Korie had an easier job, for
Grapes has essentially a group hero — the Joads — and
Steinbeck follows them for a relatively brief time on their journey from
Dust-Bowl Oklahoma to the — they hoped — greener pastures of
California. The narrative line is simpler — and straighter. 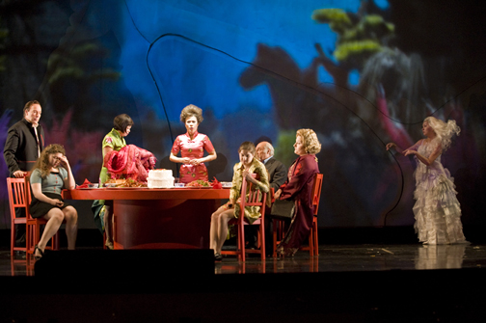 Tan’s story extends over the better part of a century and moves from
America to China, whence this family came in the years after World War Two.
Much disappears from Tan’s novel on the way to the opera stage. Only
those who know something of the horrors of Mao’s Cultural Revolution
will respond to mention of that age of repression in the libretto. And what
American knows enough about calligraphy to appreciate what was involved in
making ink for this ancient craft? This was the business of Precious
Auntie’s family in China.

But back to reading. I am grateful that Ken Smith has documented the
genesis of the new opera in Fate! Luck! Chance! Amy Tan, Stewart Wallace,
and the Making of ‘The Bonesetter’s Daughter’ Opera
(San Francisco, 2008. $24.95). Smith, long a respected music critic, has,
with wife Joanna Lee, become the major mediator between American and Chinese
music in this age of cultural cross-pollination. His book — rich in
photos — records a creative process largely unique to opera, for
Bonesetter’s Daughter is the product of a collective headed by
Tan and Wallace that included director/choreographer Chen Shi-Zheng and the
several musicians whom the two came to know on their several trips to China.
Indeed, as I read about the many influences upon the work during the three
years of its genesis I began to fear a collage of cultural fragments lacking
specific identity. Happily, Bonesetter’s Daughter is anything
but, and that is due largely to Wallace’s ability to assimilate what he
experienced and express it in a voice that is totally his own. 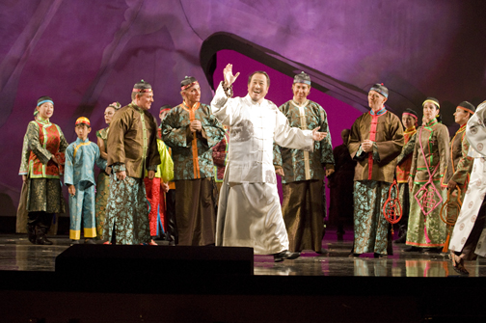 A Chinese-American opera; an American-Chinese opera? Just what is the
work? It is decidedly American, and in Smith’s book Wallace defines his
idiom in recalling his effort “to write music in my own language that
felt Chinese without sounding ersatz Chinese.” He explains
further: “You can hear this in the timbre and texture, but also in
terms of the space between the notes that lets the music resonate with a
sense of ritual.” That says it all and accounts for the newness —
for the freshness and transparency of the score.

At 2 hours and 40 minutes, Bonesetter’s Daughter is
nonetheless an engagingly intimate work exuberant in emotion. I felt at the
end that it is a good work, not great perhaps, but good in its human
authenticity.

Fate! Luck! Chance!, a documentary on the making of the opera,
will be shown on public television in early 2009. Smith’s book includes
the complete libretto of Bonesetter’s Daughter.