As long as Zeljko Lucic and Nadja Michael take the lead roles as Mr. and Mrs. Mayhem, that response should be divided more or less equally between delight and disgust.

Delight at the athletic, seductive Lady Macbeth who, in Michaelís ravishing (almost cloyingly so) interpretation, becomes Salomeís English sister with a penchant for conspiracy as an (a)rousing activity. From limber acrobatics in the lowered chandelier to her particularly detailed rhythmic articulation to her dramatic, wildly vibrating yet piercing voice (neither incapacitated by a cold, as Intendant Klaus Bachler had announced, nor quite as ugly in tone as Verdi had intended) she was a Lady Macbeth to die ó or rather ó to murder for.

Disgust at the band of extras and chorus members that director Martin Kuöej sends downstage to micturate all over the place at the opening of the third act, and for no less than an astounding three minutes. (Though maybe the audience was merely jeering because choreographed urination is such a clichÈd element in European Verdi direction.) When 13 topless playboy bunnies with pink wigs (undoubtedly the wind spirits) appeared shortly thereafter, a smart aleck yelled ìbraviî, creating an unusual amount of merriment during a performance of as dark an opera as Macbeth.

At about this point, the show was at the verge of being hijacked by the audience; laughter, lusty boos from every tier, and blatant chatter created a casual, irreverent atmosphere rarely encountered in modern opera houses. Slightly rowdy, perhaps, but quite enjoyable in its way.

Enjoyable like Zelijko Lucic, the Serbian baritone who sang Verdi, instead of pushing it, his voice ringing effortlessly through the round of the Staatsoper, more impressive even than the very fine Banco of Roberto Scandiuzzi whose severed head would became the play-toy of Lady Macbeth.

And enjoyable like the homogenously playing Bavarian State Orchestra under Nicola Luisotti who got a salvo of boos, but deserved the many more bravos for his nervous, restless reading that had all the accents in the right places and made great music of what Verdi supplied him with.

Kuöej (whose Salzburg La Clemenza di Tito is my measure of direction excellence) and his stage designer Martin Zehetgruber created many fine views: the vast field of skulls over which the protagonists climb the entire time and the walls of plastic sheets (· la Guy Ritchieís Snatch) all make good, unsubtle points. 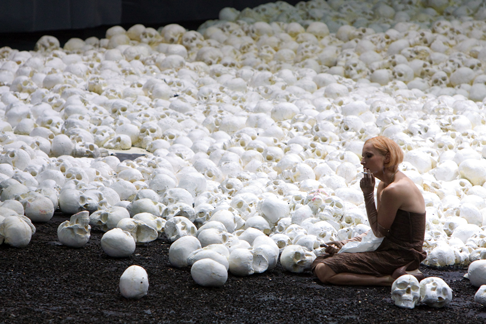 Nadja Michael in a scene from Macbeth

But too many ideas seem unfiltered and crass, as if Kuöejís team had had no time to filter out the unnecessary ones, or distinguish between the obvious and the obscure. The handful of blond children (modeled after Village of the Damned) that variously represent the witches, fate, and murdered innocents. The obsession with Bancoís severed head. The constant dressing and undressing of the chorus (nakedness, medieval costumes, grimy underwear). It all veered between gratuitous, pointless, and too dense. It made for a production worthy of praise and mockery alike ó a curious (in the best and worst sense of the word) opening for the new Bachler regime at Germanyís most important opera house. 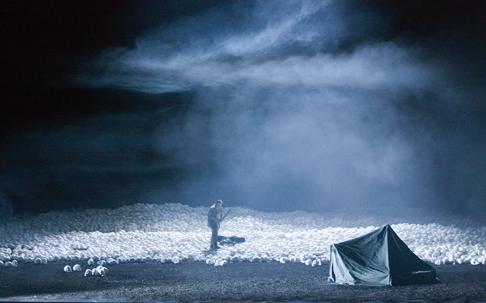 Zeljko Lucic in a scene from Macbeth

All photos by Wilfried Hoesl courtesy of Bayerische Staatsoper