Jonathan
Miller’s durable production of Rossini’s most popular opera has
returned almost every second season since its 1987 premiËre, and though it
has its longueurs (as does the opera itself) the thing that has kept
it fresh is its straightforward attractiveness and humour. The
company’s casting department has a large part to play in its enduring
success, too – Tanya McCallin’s straightforwardly functional
period set is normally populated by a combination of company veterans and
fresh and promising young artists, with the result that it always feels like
a successful ensemble piece with an eternal spark of life.

One thing which wasn’t new was Andrew Shore’s Bartolo; he has
become a fixture in this production, to the extent that on the advertisement
posters scattered around London’s transport system it is his name alone
that is emblazoned next to the title of the opera. His gift for delivering
words when singing in English is quite unequalled, and he plays the
staging’s physical comedy to maximum effect. Sometimes in the past this
has resulted in an imbalance, because with Shore as Bartolo it takes a
particularly strong and characterful Rosina to convince the audience that she
could credibly get the better of him. Fortunately the young Swedish mezzo
Anna Grevelius was his ideal foil; a beautiful girl who always had a glint in
her eye, and whose warm and rounded tone and lovely sense of bel
canto line were combined with pinpoint accuracy of pitch and diction.

The Canadian tenor John Tessier, making his house dÈbut, made an extremely
personable and youthful Almaviva. If he was rather superficial, this was the
production’s idea rather than his own; Rosina is seduced more by the
idea of being swept off her feet by a romantic young man than the reality of
what life might actually be like afterwards. He showed off his lovely light,
easy and secure tone with some stratospheric ornamentation, though conductor
Rory Macdonald would have done well to give him a little more space to
prevent an occasional stridency and unevenness which crept into some of his
fastest runs. He demonstrated a gift for comedy and character acting with
both his disguises, and served equally well as an ardent romantic hero when
required.

Of the major principals, only Garry Magee’s Figaro disappointed; the
eponymous barber needs charisma and charm, and his entrance aria should be
filled with unshakeable masculine confidence and panache, but often it felt
as though he was just singing the notes. 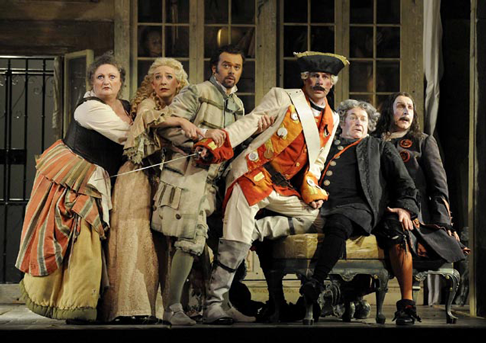 Two factors put this into a class above what could have been a
run-of-the-mill revival of an ENO warhorse. Firstly it would appear that the
original director, Jonathan Miller, might have had more of a hand in this
revival of his than in any earlier run I can remember; various long-absent
details have been restored, while much of the sillier business which the
staging has acquired over the years, such as Ambrogio’s constant
yawning and Berta’s incurable sneezing, has been mercifully consigned
to the dustbin. More to the point, the cast had a real chemistry together,
filled the stage with life, and looked and sounded as though they were really
enjoying themselves.

All photos by Alastair Muir courtesy of English National Opera