That was the point of making the story into an opera in the
first place. Serious, tragic operas were not, in those days, set in
contemporary times, or among bourgeois persons. The management of La Fenice
was sufficiently nervous to backdate the sets and costumes by a hundred years
to the era of Manon Lescaut, but no one was fooled – everyone knew
about Dumas’s recent, somewhat autobiographical hit novel and play,
La Dame aux Camellias.

But more: La Traviata, for all its denunciation of hypocritical
society, underlined a moral: once a woman had been around the block, she
could never go home again, make a successful marriage, live happily ever
after, become somebody’s mother, for heaven’s sake! It
was important that this moral be made clear because, even back in 1853,
everyone knew it wasn’t true – women of dubious reputation made
prominent, respectable marriages all the time – even in Italy, never
mind Paris. (For men with a past, of course, there had never been a
problem.) In Italy, where divorce would not be an easy matter for another
hundred years, marriages ended and divorced persons made alternative
arrangements, accepted by their friends and families with greater or lesser
indifference. Violetta simply had bad luck – and bad microbes. (Her
original, Marie Duplessis, the high-class courtesan who discarded Dumas
fils, wedded a nobleman but died of consumption at 23.)

The Met’s overcrowded Traviata has been touched up,
polished and primed because Act II was telecast as part of the opening night
Gala – but also to give a little more clarity to some of the muddier
moments of the overblown Zeffirelli staging. There is a new conductor, Paolo
Carignani, who leads a taut, lean performance without skimping on necessary
sentiment – a waltz is a waltz is a waltz. His tempos are a bit
frenetic in Act I – the singers seemed to find them too fast as well
– but throughout the evening the climaxes evolved naturally from what
had gone before, and no one was drowned out.

Anja Harteros is a tall, slim, handsome lady of aristocratic mien,
appropriate to the Countess in Figaro, the role of her Met debut. In
the party scene, where a tiara perches atop her dark curls, she resembles
some frozen, forbidding royal of World War I vintage, which did not make for
a sympathetic figure. I’d have liked her a lot more without the
sparkles up top.

Her voice, when not warmed up, is harsh, even acid. In Act I she was not
at all appealing, coloratura uneven, pitch sometimes off target, and her top
capable of no optional high notes. She was not, in this scene, a Violetta,
and it was unclear what role would be suitable – Lady Macbeth
perhaps, where a large, ugly sound and uneven coloratura are excusable. But
by Act II, she had calmed down – or the conductor was not pushing her
so hard – and she made rich, creamy sounds, especially at “Pi˘
non esiste – or amo Alfredo” (an exquisite moment, and one that
usually goes by unremarked). Her “Amami, Alfredo,” was capable
but not demented – she is entirely too collected to play a woman losing
emotional control. The last act was her best. The voice then revealed a
sweetness when singing softly – it is the brilliance of the first act
that escapes her, that hardens her sound. 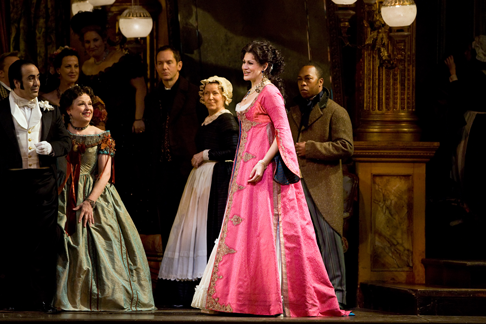 A scene from Verdi’s “La Traviata” with Anja Harteros as Violetta.

At least her height means she is one Violetta who does not look absurd
beside the inevitable Baron Douphol of seven-foot-tall John Hancock, who has
sung the part 36 times since this production premiered. Among other novelties
this year: at curtain rise, he and Violetta were on the stairs, preparing to
retire for a night’s romp, when their rowdy friends burst in, to his
manifest annoyance. There is less picnicking on cushions in the opening scene
than there used to be. But I miss the glove of challenge Hancock originally
threw down to Alfredo at the end of Act II – the music expresses it,
the era demands it, why has the Met deleted it? Do they think modern
audiences would laugh? Would they? Would it matter?

The evening’s Alfredo, Massimo Giordano, is short, stocky, and not
very handsome in the long “romantic” hairpiece that looked so
good on Jonas Kaufmann. Giordano does not possess an instrument of
exceptional beauty, but his instincts are musical; he does not bray and his
high notes fill the room. He pays attention to the filigree in his cabaletta,
and he launches himself into impassioned phrases with a nice sense of line.
His finest moment – and Harteros’s – came during
“Parigi, o cara,” sung caressingly, filling the house softly and
accompanied tenderly – for a few minutes they were the perfect Alfredo
and Violetta, singing to comfort each other, and we happened to overhear
– a lovely bit of intimacy in this outsize occasion. (Harteros could
use this voice for Lady M’s sleepwalk.)

Germont was Željko Lučić, who sang Macbeth last season:
a real Verdi baritone, with a smooth, mellow sound as large as you could
desire, and an actor’s judgment of the effect of each word. Most
Germonts either stand stiffly or become excessively, even tearfully,
sympathetic to the lady with a past whom they encounter in Act II;
Lučić’s body language showed a provincial’s
discomfort in this sophisticated milieu, and he had the grace to seem
downright embarrassed at the sordid sacrifice he requested of her. A bit of a
sob frilled each line of the second verse of “Di Provenza,” and I
thought for a moment they might not cut his cabaletta. Cut it they
did; the number is a pointless convenienze, but for once I wanted to
keep it in, just to continue reveling in his sound. Ever-reliable Theodora
Hanslowe sang Flora and Kathryn Day sounded clear as a bell in the usually
fade-out role of Annina.

With Lučić as the thane, Harteros as his lady, Giordano as
Macduff and lively Maestro Carignani urging the witches on, a potentially
great cast for Macbeth currently holds the stage in the Met’s
Traviata.

All photos by Marty Sohl/Metropolitan Opera.