It can be an ensemble work, with the main roles given relatively equal weight, and interaction between the characters central to plot development. An opera production can also be a star vehicle, in which a single principal (or more rarely, a pair of leads) carries the performance, while the rest of the cast plays supporting roles that sets off the drama of the “stars.” Some operas may be conceptualized either way, while others lend themselves naturally to one staging type or another: *La bohËme*, for instance, works best as an ensemble piece, while *Boris Godunov*, particularly in its 1869 version, revolves around its protagonist. Arguably, so does *Carmen* whose femme fatale heroine writes not only her own tragic fate, but those of at least two other principals, Don JosÈ and MicaÎla (the self-involved matador Escamillo will probably get over her death soon enough). 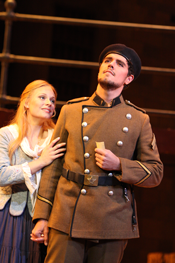 Sabina Cvilak as Micaela, Thiago Arancam as Don Jose. [Photo by Karin Cooper]
The absolute necessity of mezzo star power for a successful Carmen has once again been demonstrated by the Washington National Opera’s current production of Bizet’s classic. The fabulous DC native Denyce Graves completely dominated on stage as the seductive gypsy, with both her colleagues and the audience content to let her rule not only Don JosÈ’s heart, but also Georges Bizet’s score. Ms Graves allowed herself quite a few liberties in text projection, pitches, and timing of her part. Yet somehow, even the most fastidious purist would not have minded such an open desire for “liberty,” to quote the lady herself. She was utterly convincing in her interpretation; and if the locals saw more a fast-talking broad from South-East DC than a factory girl from the gutters of Seville, well, so much the better. Of much help were the gorgeous reds and oranges of Lennart Mark’s flamenco-inspired costumes, and the percussion section of the orchestra, which thankfully did not follow Ms Graves’s pliable relationship with time, and accompanied her dancing tastefully and precisely. Most importantly, to the singer’s credit, she has crafted her heroine’s image beautifully, knowing when to seize the limelight and when to fade into the background. The Act 2 quintet turned out to be one of the most successful moments in the production precisely because Ms Graves stepped back and blended with the ensemble. Yet later in the scene, her pitch-perfect, richly textured call “Amour…,” thrown to Escamillo from across the stage, turned not only the matador’s head, but everyone else’s in the building. 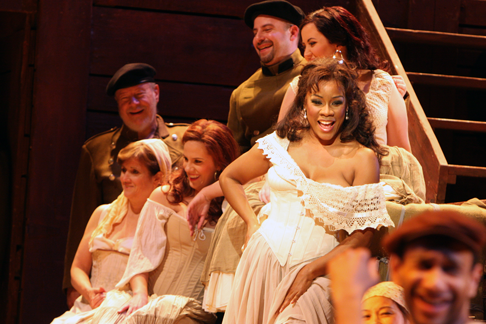 Of course, with Denyce Graves, acclaimed as “the definitive Carmen,” on the playbill, a powerful protagonist in this WNO production was to be expected. More unusual was the fact that the sentimental lyrical soprano MicaÎla, traditionally the weakest link in Bizet’s quartet of leads, almost managed to stand up to her rival. This thanks to Sabina Cvilak’s convincing performance, still a little shaky in Act 1, but seemingly having grown with her heroine toward a strong, powerful Act 3 finale. The men of the cast, on the other hand, were almost invariably unimpressive. Not that they did not try to make their mark. Both Thiago Arancam as JosÈ and Jorge Lagunes as Escamillo struck the right poses and delivered their high notes with panache; the Flower aria turned out quite well as a result, the torero’s infamous couplets rather less so. For the most part, however, the two male leads sounded weak and much too easily dominated by their ladies. Carmen’s derisive laugh moments before her demise seemed therefore right on target – John Marcus Bindel as Zuniga, and hilarious James Shaffran and Peter Burroughs as Le Dancaire and Le Remendado respectively all left her poor tenor in the dust… The solid support cast and the girl power, however, were enough to ensure a quality production and an enjoyable evening of “all about Carmen.”
Olga Haldey