Although it may have been bitter cold outside, last weekend at the Bavarian
State Opera things onstage were blistering “hot.”

For starters, conductor Bertrand de Billy paced the most achingly
passionate and painfully felt Werther that a human heart could
probably bear. There did not seem to be a phrase that was not filled with
understanding and dramatic illumination. Under Maestro de Billy’s sure
stylistic hand the orchestra turned in a luminescent, rhapsodic reading of
the highest international quality, raising goose bumps and occasioning tears
more than once during this evening of splendid music-making.

But Werther would go for little without at least two star-quality singers
and Munich delivered the goods from the ranks of the best interpreters
currently available: Massimo Giordano and Elina Garanca.

Mr. Giordano is as fine a Werther as one could wish. His warm lyric tenor
is produced with a sound technique and spinto leanings that reliably
encompasses all of the demands of the title role. True, he does cover the
voice (only ever-so-slightly) at the very top, and his rather rapid (but
pleasing) vibrato occasionally gets in the way of parlando utterances, but
his full-throated climactic outbursts were quite thrilling. Few current
exponents of this treacherous part can display such a lovely command of
pianissimo and messa di voce effects that are major part of Massimo’s
artistry. Moreover, he has a dark, manly presence; offers committed acting;
and immerses himself convincingly in the id of this tortured character, all
the while maintaining absolute control of his vocal resources.

Ms. Garanca was every bit his match as Charlotte. She is a more known
commodity to the public thanks to marketing which trades heavily on her
fashion model good looks. She is a stunning blond, yes, but. . .she sings,
too! I recall admiring her voice from a recent televised concert, but nothing
could have prepared me for her assured stage presence and the
“live” impact and immediacy of her vocalism. Her wonderfully
schooled, eminently pleasing lyric mezzo is a bit “anonymous”
perhaps, and in this famous role she invites (albeit favorable) vocal
comparison with the likes of Troyanos, von Stade, and Graham (who will take
over the role later in the run). What sets Elina apart is not only top notch
singing, encompassing a gamut of searing high notes, arching line, mellow low
notes, and everything required in between; but also an unaffected,
spontaneous embodiment of Charlotte that is a model of invention. Oh, yeah,
and there is that physical beauty thing in the quotient. Memorable
performance.

The two stars were ably supported by Natale De Carolis as Albert and Elena
Tsallagova as Sophie. Mr. De Carolis is possessed of a warm lyric baritone
that he deploys perfectly in service of this French repertoire. His
characterization did make Albert seem more of a milquetoast than usual (or
necessary) but it was a consistent choice, and he is a natural on the stage.
Ms. Tsallagova has a secure lyric soprano and a charming presence, and if her
tone was a little cool here and there, she was nonetheless an affecting
younger sister.

The vocally assured Schmidt and Johann of Kevin Connors and R¸diger Trebes
were equaled by Christoph Stephinger with a well-sung turn as
Charlotte’s father (although he did seem to eye the conductor more than
most). The scrappy small role of K‰tchen was well taken by Angela Brower, and
Br¸hlmann found Todd Boyce ably impersonating the town fool. Both are members
of the Bavarian State Opera Studio, and I recall having seen Mr. Boyce do
similar good work at Glimmerglass and St. Louis.

J¸rgen Rose is credited with “stage direction, scenery, light
concept, and costumes.” (Whew, I guess handing out the programs had to
be entrusted to someone else.) God bless Mr. Rose for his take-charge
attitude, for this was a beautifully realized production that consistently
heightened all of Massenet’s considerable dramatic strengths and deftly
glided past his fleeting weaknesses. The concept emphasizes our hero’s
total isolation. Drawing upon an image of Caspar David Friedrich’s man
on a mountain, a large boulder/cliff is placed center stage topped by
Werther’s writing desk.

The “abyss” that is surveyed from this vantage point takes the
form of white walls and ceiling that are colorfully scrawled with quotations
from Werther’s writings. In Acts One and Two, these are relegated to
the corners of the structure, while in Three and Four they become denser and
even more erratic as Werther’s tormented state degenerates.

The upstage is completely open and is dressed with a realistic tree (read:
“nature”), and later, a Nativity scene (read:
“hallucination”). A front scrim is scrawled with a circular
pattern of texts suggesting a skewed cosmos. A dough nut shaped revolve
swirls minimal furniture pieces around the rock in an orbit mirroring the
effect of the scrim art. And real mirrors outlined the entire proscenium
framing, reflecting and disorienting the action. This was a splendid, unified
design compellingly lit by Michael Bauer who alternately bathed the stage in
the homey warmth of sunset, or coolly distanced us from the occasional
freeze-framed action when Werther’s mental shifts took him to A Bad
Place. Bauer’s isolation of the tree with its ever-evolving
illumination angles was a telling effect. 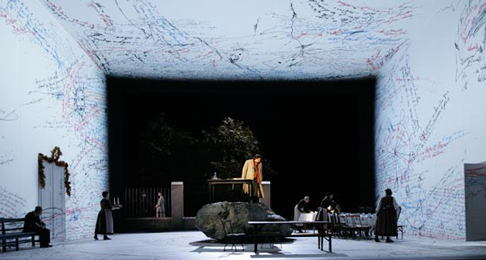 A scene from Werther

Rose the director made the most of every opportunity within this
framework, and filled the work with individual touches. The church yard scene
becomes the occasion for celebrating a 50th wedding anniversary of a beloved
village couple, bringing the loveless mis-pairing of Charlotte and Albert
into higher relief. The recurring device of having the cast freeze in time as
Werther has a mental health lapse into a scene only he can see, is a master
stroke that pays big emotional dividends. Werther’s retreat to the rock
and his writing desk was used judiciously. After his death, Charlotte
helplessly but inevitably surrenders to her own isolation, collapsing on the
structure with heart-breaking effect.

It should also be noted that the exceptionally well-trained
children’s chorus was the work of Stellario Fagone, and that Assistant
Director Franziska Severin contributed to the remounting of this production.
Fine work from all, I do not recall a moment that did not “land,”
that did not make dramatic sense, and that did not make a definitive case for
Massenet’s Werther. And how often can you say that about opera
performances today? 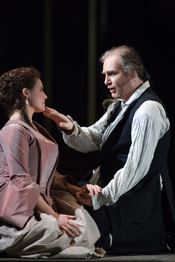 John Mark Ainsley as Bajazet and Sarah Fox as Asteria in Tamerlano
Happily, the very next night yielded another, wholly different sort of
success with a powerful rendition of Handel’s Tamerlano.
Musically, we were fortunate to have Ivor Bolton in command since he is one
of the leading proponents of the performance traditions of this period. He
led a taut, lean reading, as noted for its driving, dramatically alert tempi
as it was for its nuanced accommodation of introspections, as required by the
ever-shifting alliances and moods of the story’s principals.

The above-the-title name draw was the sublime David Daniels as Tamerlano
himself. Although a handful of accomplished challengers may be occasionally
nipping at his heels, Mr. Daniels for me remains the world’s leading
counter-tenor, the one who has set the bar for this Fach at the very high
level it is today. There is a slightly earthy quality to his tone that makes
his voice readily identifiable and appealingly listenable for an entire
evening. His trip-hammer coloratura technique delivers blazing results. He
can scale back the voice at will to a melting thread of a tone that can cast
a spell of hushed amazement. And this remarkable instrument is housed in a
handsome, bearded lumberjack of a physical presence, who performs throughout
with easy, honest dramatic instincts. 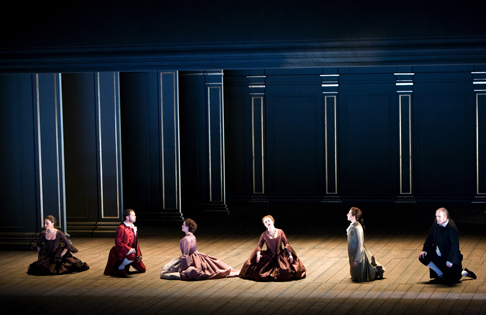 A scene from Tamerlano

But then, the entire cast was outstanding. In the key role of Bajazet,
John Mark Ainsley treated us to generous dramatic involvement, complete
stylistic command, and a fresh-voiced tenor, albeit just a bit in the dry
side. Soprano Sarah Fox had been announced as indisposed but then sang
uncommonly well as Asteria, if with a bit too much straight tone on the piped
high notes for me. It was a superbly executed “choice” but I may
have appreciated more variety and at times, more warmth.

The pants role of Andronico was confidently assumed by Mary-Ellen Nesi,
who not only married vocal fire power to a richly pliant mezzo, but also
found a profoundly sympathetic physical presence for the part. Maite
Beaumont’s Irene had plenty of spunk and sparkle, managing to come off
three-dimensional in a rather two-dimensional role. Her accurate coloratura
and highly serviceable upper extension of her core voice made for pleasant
listening. In the less splashy baritone role of Leone, Vito Priante had all
the melismas in place, and showed great beauty of tone.

I have long admired stage director Pierre Audi. I find that he makes
well-considered bold choices, and best of all, that he knows how to direct
the meaning of the drama at hand. And he takes calculated risks. What could
be riskier than taking six singers in a repetitive, Handelian opera and
putting them on a bare stage? No frou-frou and excesses to distract or help
the extensive arias go down easier. . .just brilliant direction.

For through Mr. Audi, we see what makes these characters tick. He has his
actors singing to, and about, each other and (are you seated?) he makes them
listen to each other and react. Movement evolves out of the characters’
motivation and he edits and refines this to almost unfailingly place a singer
in a position to be heard to maximum advantage. I was highly impressed with
his creation of “levels” (standing, kneeling crouching,
reclining), and the psychological exploration of dominance and submission as
the fluid relationships continually morph. I lost count of how many times I
thought “this is one of the most beautiful stage groupings I have ever
seen.” 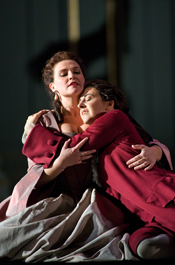 Sarah Fox as Asteria and Mary-Ellen Nesi as Andronico in Tamerlano
When the curtain rose on the second half of the performance, a single
black chair had been added to the bare stage. A first reaction was to laugh
at this absurd minimalism, but we soon became aware that this lone piece
would be deployed in various cleverly uncluttered ways to indicate the
assertion of power. When at last a nearly naked Bazajet dies seated upright
on what seems now to be a throne, and Tamerlano merely closes the man’s
eyes to indicate his passing, it created an utterly simple moment of the
utmost power.

Even with the charming outdoor Christmas Market in full swing just across
the Platz, it nevertheless seemed the real holiday treasures were on display
inside. On the strength of this remarkable pair of back-to-back successes,
the Bavarian State Opera confirmed in my mind that it remains Germany’s
premiere international company.

All photos courtesy of Bayerische Staatsoper