The company could not
have known that “local boy” Barack Obama would be elected the
first black president of the United States shortly before the premiere of its
first-ever Porgy on November 18. Thus the two events obviously have
nothing to do with each other; they do, however, underscore the degree to
which the encounter with a well-established and well-known work of art is
colored by such a coincidence.

It would be incorrect to suggest that the enthusiasm — indeed, the
euphoria — with which masses of Americans reacted to Obama’s
election carried over into the Lyric’s impressive Art Deco home on
Wacker Drive. Yet a visitor to the city in the Porgy audience could
but recall the exuberant scene across town at Grant Park on election night
and ask whether Obama’s victory provides a new filter for the 1935
work.

Porgy, after all, has long been celebrated — if with occasional
discomfort — as the great American opera. But does it still lay claim
to that stature? To ask that question in no way overlooks the superior
quality of the Lyric production that originated at Washington’s
National Opera and went on to evoke acclaim in Los Angeles.

Director Francesca Zambello, who on occasion has trouble reigning in a
hyper-active imagination, opted here for a straight-forward and down-to-earth
approach to the opera, recreating — with the help designers Peter J.
Davison and Paul Tazewell — a slice of the life of the Gullah blacks
whose life — and music — composer George Gershwin and his
creative team had studied closely on their visits to Charleston and its
near-by islands.

The demand of the Gershwin estate that Porgy be staged with an
all-black cast (except for police officers) remains in force, and the singers
that the Lyric assembled documented the achievement of such vocalists in a
world open to them for a mere half century. What was particularly impressive
is that these are artists whose repertory extends far beyond Porgy.
Baritone Gordon Hawkins, Porgy on November 21, sings Alberich in stagings of
Wagner’s Ring around the world, and Lester Lynch (Crown) is a
celebrated Count di Luna in Verdi’s Trovartore both here and
in Europe. Morenike Fadayomi (Bess) lists Donna Elvira and Salome among
signature roles, and Jonita Lattimore includes the Figaro Countess
and Marguerite in Faust in her repertory. Marietta Simson (Maria),
slowly becoming a senior among today’s black artists, is treasured for
her work both in opera and oratorio. One could continue to list such credits
of distinction for each member of the cast.

For the success of the production, much credit goes to John DeMain, who
all but re-invented Porgy when he conducted the 1975 Houston Grand
Opera production that staged the work complete for the first time with the
sung recitative that Gershwin had intended. A stellar evening at the Lyric
— beyond all doubt. 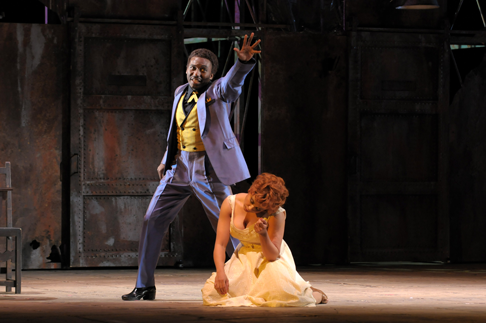 Why then did one — or at least some in the audience — feel
that this production was more an impressive document than a thrilling
experience of great opera? Does the election of Barack Obama as president
suggest that Porgy, despite its wonderful “hit” tunes,
is dated?

As mentioned above, there have always been reservations about the work.
Early on, critic — and composer — Virgil Thomson wrote that
“folk lore subjects recounted by an outsider are only valid as long as
the folk in question is unable to speak for itself,” and Obama’s
election proves definitely that that is no longer the case. Duke Ellington
found that “the times are here to debunk Gershwin’s lampblack
Negroisms,” and several members of the original cast later questioned
whether their characters did not play into the stereotypic picture of African
Americans as part of America’s huddled masses, living in poverty,
taking drugs and settling disagreements with their fists.

An earlier filter on the opera was provided by the civil rights and black
power movements that dominated the American scene after the 1950s. Upon a
revival of the Porgy play in the ‘60s, for example, social
critic and African American educator Harold Cruse called it “the most
incongruous, contradictory cultural symbol ever created in the Western
World.” And it evoked resistance among black artists. 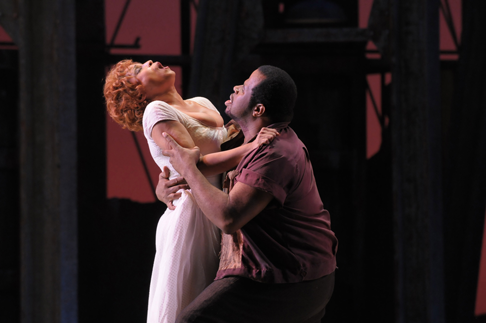 Harry Belafonte declined to play Porgy in the 1950s film (the role went to
Sidney Poitier), and soprano Betty Allen, president of the Harlem School of
the Arts, loathed the work. Grace Bumbry, Bess at the Met in 1985, later
said:

I thought it beneath me; I felt I had worked far too hard, that we had come
far too far to have to retrogress to 1935. My way of dealing with it was to
see that it was really a piece of Americana, of American history, whether
we liked it or not. Whether I sing it or not, it was still going to be
there.

These are comments that come to mind on the heels of the Chicago
Porgy and they have a certain valid resonance when the work is
watched over Barack Obama’s shoulder. Underlying this feeling is the
coincidence that the Lyric paired Porgy with Alban Berg’s
Lulu at the mid-point of its 2008-2009 season.

For Lulu, an absolute among the femmes fatales of
opera, was completed in fragmentary form in 1937, only two years after
Porgy. Yet — and despite its roots in the hot-house
fin-de-siËcle sin-soaked soil of Freud’s Vienna, the work
— in Paul Curran’s superlative production — is of
overwhelming contemporary relevance and appeal.

This is not to suggest that Porgy and Bess should be shelved. In
an erudite note in the Chicago program Naomi AndrÈ sums things up:

The most disheartening part of the opera is the hopelessness of the
characters’ fates. It is distressing to see the drinking, gambling,
murder and sexual assault that take place. Even more devastating is that
the characters we cheer for end up dead or broken by the end. And we know
that Porgy — a poor crippled black man, will never make it to New
York. Although the residents of Catfish Row sing about the
“Heav’nly Lan’ of promise and opportunity, we know they
will most likely not see it in their lifetimes.

That’s where Barack Obama enters in. One likes to think that a young
black of today, already established in the drug trade, might have seen the
Grant Park demonstration and thought: