There are nights at the opera when we want to have
fun. Francesco Cilea wrote Adriana Lecouvreur for such
occasions, and such occasions there are in glorious plenty in the current Met
revival of this sublime bit of kitsch. If that other grand operatic folderol
La Gioconda, revived in the Met’s opening week last fall, had been
cast with half the care or staged with half the expertise of this
Adriana, it would have been a hit and not a yawn. For one thing, the
title role in Gioconda should certainly be offered to Maria
Guleghina, who performs Adriana with all the excitement (if not exactly the
dependable legato) that both roles call for. She would give Gioconda
the fire it conspicuously lacked last fall — the fire that makes a
Gioconda — or an Adriana. Guleghina knows what melodrama
is all about. When her Adriana, feverishly dying, cried, “Melpomene son
io!” one did not quite believe it, but one did believe that Guleghina, as
Adriana, believed it.

Guleghina does not have a reliable instrument. I’m trying to choose my
words carefully here. Her voice is extraordinary — sometimes it bubbles
over like some great Russian river in flood, whelming the landscape in solid
sound, and at other times it blinks out just when you hoped you could rely on
it. Her technique is not smooth when a quieter voice is called for, the
exquisite thread of a Milanov or a Freni is not hers to command. She sings
the great aria of her first appearance, “Io son l’umile ancella,” in
separate bursts, divided voices, not as if she is explicating her theatrical
technique (the text at this point) but as if there is a disjunction between
the amount of breath she has summoned and the amount that arrives. This can
unsettle, as it does in such other Guleghina signature roles as Verdi’s
Abigaille and Lady Macbeth — but they both require a coloratura precision
she does not have; Adriana does not, and is therefore a better role choice
for her. She tosses herself about with abandon in the love scenes, but she is
at the top of her form in the great confrontations with Olga Borodina’s
Princesse de Bouillon, and when, at the climax of Act II, these two great
ladies in full cry and spectacular silken costumes, panniers on display like
the plumage of prehistoric birds in battle array, it is one of opera’s
great scenes presented at the pitch of gladiatorial combat. Poisoned violets?
I was surprised not to see blood and broken bones, picked clean by harpie
teeth and claws. 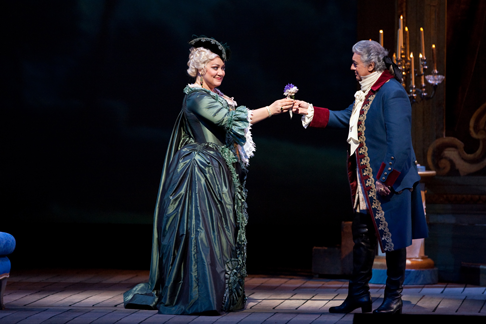 Borodina, of course, is one of the great voices of our time and one of New
York’s happiest acquisitions from the Russian vocal stable. Her Laura was a
rare fine feature of the Gioconda, but the Princesse is a far more
violent, desperate character — which suits her admirably. We hate the
Princesse because she refuses to give up the man she loves, though
he loves Adriana, and because she resorts to poison to keep him —
but remember, she’s in the throes of first passion, after years of an
arranged, aristocratic marriage, and Cilea spares her a dab of sympathetic
treatment. In any case, Borodina’s singing is always passionate without
losing track of musicianship. Her low tones are utterly Russian, but she has
learned how to deploy them in Italian music (and French music) without Slavic
accents, and her control in this hectic part was icily correct. When she
wants a note to go here, it goes here, if there,
it goes there, nowhere else, precisely pitched and just as loud or
as soft as she desires it to be. This is not as common (especially among the
ladies in the Italian repertory nowadays) as it might be, and I wish she’d
give Guleghina a coaching session or two. 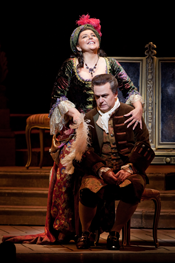 The original choice for Maurizio being transferred to the new
Trovatore, the role was given to Pl·cido Domingo, originally set to
conduct these performances. Maurizio was the role of his Met debut forty
years ago, and everyone (not least Guleghina) was thrilled that he got
through it decently — but let’s be frank, shall we? This was not a
performance to thrill from any singer less beloved. Though his manner was
able and gallant, his sound was dry and strangulated, his great martial aria
of Act III rather painful than otherwise. When he sang Gherman in The
Queen of Spades in 2004, he still sounded youthful as well as romantic;
in this far lighter role he was no longer a pleasure to hear. Only by the
final romantic duet with the dying Adriana had he warmed to some beautiful
phrases; his sobs were heart-melting and will be, for me, perhaps, a
satisfying last vocal effort from the tenor of the Traviata that
first made me an opera fan forty-three years ago.

Roberto Frontali made a touching, satisfying Michonnet, and John Del Carlo
charmingly (and loudly) occupied the role of the scheming Prince de Bouillon.
Marco Armiliato kept a good pace in the pit, allowing the fragrant melodies
of this fragile work to bloom sweetly under his care, and supporting the
singers nimbly.