In fact I thought, “oh darn (or some such expletive), here’s yet another big, shallow, white box.” Is there any veteran opera-goer in Europe that at one time (or many) hasn’t felt that same way? C’mon, ‘fess up. Ya know ya have. (Even though designers may try to mix it up once in a while by using a big. . .black. . . box.)
Anyhow, without wishing to prejudge Herbert Murauer’s set design as Euro-clichÈ, I settled in to observe what promised to be a good cast, a fine conductor, and one Germany’s top companies get about their Straussian business. My optimism what somewhat short-lived, at least visually. For the white panels backing the shallow box slid open to reveal another shallow, down-at-heel hotel room, nearly empty of furniture save a few straight back chairs. A lamp had lost its table and was plopped on the floor. Makeshift black cloths covered the windows, straining like a skirt that is too short. The dingy, cramped foyer would surely have scared off any of Arabella’s suitors before they even crossed the threshold. It was not incorrect, to be sure, just, well. . .depressed. And depressing.
The panels did some premeditated sliding around, aided by the back and forth linear movement of the entire shallow hotel suite, revealing one half of the room, then the other, then another “zwischenzimmer,” and finally Arabella’s denuded bedroom (which still had plenty of clothes in the closet, however). Oh, and at one point revealing the scrambling stage right crew, as a chunk of wall detached and revealed them in what was clearly an unplanned effect. I wish that I could say that any of these “reveals’ were, well, revelatory. But there did not seem to be a rhyme or reason to the bits and bobs we were allowed to see at any given time, nor was any one composition of them artistically very interesting.
Act II’s party scene initially promised more, but once past the pleasant look of the beige marble stairs and the crystal chandelier over the landing, the long brown rectangular settees became monochromatic and, even with the subsequent rolling discovery of the men’s toilet (ooooh, Matteo threatens to off himself with a pistol in the loo!), the sliding panels kept gliding tediously past set parts we were long since tired of seeing. Not to mention the chandelier became a distraction, with its crystals vibrating as the set crept around. The eternal white box framing the extreme front of the stage became a sort of DMZ, a no man’s land into which soloists advanced to, what, ruminate? Isolate? Fixate? Hard to know.
The spatial relationships created by this dichotomy of playing areas were suspect, and there was not a discernible consistency in their uses incorporated into Christof Loy’s variable stage direction. Character relationships were seriously stunted by having the cast as poseurs sing through the fourth wall straight at us, witness Arabella doing just that, as the text has her “seeing things” out the window she is clearly nowhere near. One thing to be said for the Frankfurt stage: it must be wider than New Jersey since these scenic configurations seesawed back and forth, and once, disappeared into the wings in one entire piece, leaving one white panel backing Arabella at Act’s end, with a vast void of blackness behind her from which Zdenka appears. 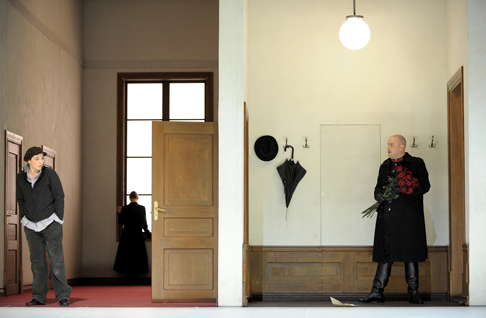 Britta Stallmeister (Zdenka), Richard Cox (Matteo)
Mr. Loy had Arabella enter, elegantly attired in a black dress and fur (Mr. Murauer’s costumes were characterful and appealing), and so far so good. But then the quirks began in earnest. She unceremoniously dumped Matteo’s gift of roses onto the floor of the “box,” only to later kneel and fuss unduly over them, finally putting one rose in her teeth as she flirted with Elemer, who ended flat on his back on the box floor for some reason. Arabella briefly stood straddling him, then as she walked away he picked at the hem of her skirt which he tried to sneak a peek up. Hmmm.
The miscalculation of behavior inappropriate to the piece escalated in Act II, when the duped dope Mandryka appeared to physically and sexually abuse poor Fiakermilli by roughly manhandling her. Indeed, if the physical struggling and shading of her coloratura shrieks were any indication, he seemed to have been digitally violating her from behind. As Adelaide (Arabella’s Mother) expressed shock at his behavior, he similarly grabbed mom’s bottom, a gesture so extremely improper it would seem to have rendered the entire rest of the plot’s progression implausible.
The whole concept of Fasching-bored tuxedo-ed and gowned young people plopping on the ante chamber steps and settees, getting progressively more wasted, and winding up like a trash pile of upscale Woodstockers littering the stairs, grew more and more predictably glum. This is Loy’s invention, not Strauss’s.
There were compensations to be sure, not least of which was clean ensemble playing from the Frankfurt Museum Orchestra. I wish the acoustics of the house were not so dry, for the virtuosic solo passages remained a bit earthbound. Nor did the lush “tutti” passages meld as creamily as they might have, resulting in a rather generalized sound that more often than not lacked frisson.
Nevertheless, the pit had a very good evening overall, and Sebastian Weigle exerted a firm stylistic hand, shaping a sensitive and well-shaped reading. Musical highlights included the ravishing Act I duet from Arabella and Zdenka (does this ever miss?), Mandryka’s duet with the heroine in Act II, and most especially, the closing scene of reconciliation.
Anne Schwanewilms (Arabella) is deservedly making quite a career as a Strauss soprano, witness her hugely successful house debut as the Marschallin in a season past at Lyric Opera of Chicago. I also caught her phenomenal Marie in Santa Fe’s “Wozzeck” and was captivated by her theatrics, beauty of voice, and sound musical instincts.
On this occasion however, I found the talented Ms. Schwanewilms too-often cooing “preciously,” variously cradling and weighting syllables as if they were somehow unconnected, and breaking up the musical line. Her high notes were usually spot on and luminously spinning, but sometimes got a wee bit tight and, sorry Anne, just a wee bit sharp. On occasions when the band was very soft (or silent) her cinema-subtle, conversational delivery could be just breath taking. But too often we were “reading” her performance via the surtitles for lack of oomph in her projection. (Not just me, Germans all around me were looking up at the words, instead of watching our diva sing them).
As Mama Rose might exhort: “Sing out, Arabella!”
A solid-voiced Mandryka, Robert Hayward seemed to spend the first act singing Jokanaan, so apocryphal was his delivery. What might work as a pontificating prophet, seemed a tad overbearing here, even for a hectoring prat like Mandryka. His performance grew much subtler overall in Two, until he morphed into Baron Ochs for the distasteful revenge flirtation with Fiakermilli. However, Mr. Hayward possesses an impressive, full-bodied bass baritone, with a few high notes “negotiated,” but all securely achieved.
Britta Stallmeister’s Zdenka is a slip of a girl with a big, penetrating voice that is even throughout her considerable range. She does seem to push too hard at big musical moments, occasionally displaying a wobble that is alarming in one so young. Mama Rose again: “Don’t sing out, Zdenka!” A little restraint should correct this minor quibble. Her characterization and physique du role were perfection.
I quite enjoyed Susanne Elmark’s turn as Fiakermilli. Can anyone, even the great Dessay, truly make this troublesome, gratuitous role work? For her part, Ms. Elmark hit all the notes securely, with a pretty, flutey delivery. Having “exhausted herself” threatening the male chorus with a riding crop like a faux X-Tube posting, she characterized all the cadenza licks as hyperventilated releases. Hey, it worked. And the lovely Susanne was blond, slim, pretty, in white lace up boots, a multi-colored bodice, voluminous white skirt dotted with flowers, and white hat and gloves. She dominated the stage in her every appearance with an assured star presence and vibrant impersonation.
I have long admired veteran soprano Helena Doese, on the Frankfurt roster for many years. Her voice does not have the youthful sheen and power of old, it is true, especially in the lower reaches, but she lacks nothing in characterization and makes a substantial contribution as Arabella’s Mother. Alfred Reiter makes the most of his stage time with a secure assumption of the heroine’s dad, Graf Waldner. Richard Cox was an excellent Matteo, clear of voice and inventively dramatic. So too, Peter Marsh’s lively, well-sung Count Elemer was a joy that consistently brightened the proceedings. Barbara Zechmeister made a good, if brief, impression as the Fortune Teller in the opera’s opening bars.
By evening’s end, the Konzept may never have gotten any clearer, nor the design any more interesting, but the many aural delights wrought by an A-list cast, conductor, and a finely tuned chorus and orchestra provided enough pleasure “inside the box” to make for quite a pleasant evening at Frankfurt’s *Arabella.*
James Sohre

All photos by Monika Rittershaus courtesy of Oper Frankfurt