Terfel’s admirers would not have been disappointed. His voice boomed
with authority, impressive for its strength, even when he had to sing
dragging a heavy rope across the stage and wade through the real water at the
front of the platform. Terfel’s vocal power always impresses, and he has
done interesting Dutchmen elsewhere. However, in this production, by
Tim Albery, he was not called upon to develop the character. Not long ago,
Albery presented Boris Gudonov as stolid, mild-mannered bourgeois.
This Dutchman was no more ravaged than Daland. When the women and
Daland’s sailors call out to the doomed souls on the haunted ship, they
face the audience and shine lights into the auditorium. When the Dutchman’s
crew do appear, they’re neatly dressed in uniform, as if they’d never
been to sea. Maybe there’s some deep meaning in this, but it could have
been thought through with more focus. 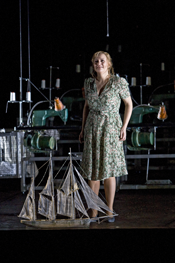 The performance was more interesting, though, for what it brought out in
the music. That glorious overture is a marvel of dramatic scene-painting,
setting the mood for the entire opera. How it’s staged reflects on the
whole production. Here it unfolded against a backdrop of green light and
projected images of rain, with shadowy figures flitting from left to right.
This was interesting, but hardly enough to sustain interest for that period
of time. Nor did it vary, although the score itself is characterized by
distinct developmental phases. This was disappointing because Marc
Albrecht’s conducting shaped these changing themes very clearly, for they
define the duality that is fundamental to the whole opera.

Albrecht’s approach revealed the underlying structure. Wagner wields
leitmotivs like weapons. By juxtaposing the sailor’s cheery love songs with
the savagery of the music associated with the storm and the Dutchman, he
draws contrasts, between stability and chaos. Particularly brilliant are the
crosscurrents in Act Three, throwing the music of the village against the
music of the haunted sailors. This act depicts a “storm on land”, just as
the first depicts a storm at sea. Keeping the different ensembles distinct is
important here, and takes some sophistication. But the Royal Opera House
Chorus excels in intricate ensemble. At last the production sprang to life,
animated by the sheer vitality of the singing. 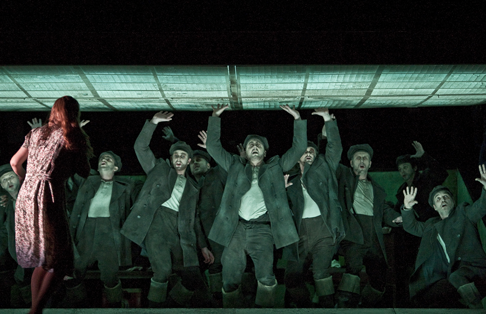 Indeed, the role of the chorus in this opera is sometimes underplayed
since attention usually centres on the Dutchman and on Senta. The influence
of Weber still hung heavily on Wagner. Some of these choruses are reminiscent
of Der Freisch¸tz, another tale of demonic forces. Thus
Albrecht’s vignette-like focus reflects episodic “aria” opera tradition
rather than the overwhelming sweep of late Wagner in full sail. Der
fliegende Holl‰nder is only the first stage of the saga.

Bryn Terfel may have been the big draw, but perhaps this production will
be remembered as the moment Anja Kampe made her name. Anyone who can steal a
scene from Terfel is worth listening to. From Kampe’s small frame emanated
a voice of great power, enhanced by an understanding of Senta’s role. Even
before she meets the Dutchman, she fantasizes about him. The other women work
in a factory, but Senta is by nature a non-conformist, drawn to the wildness
that the Dutchman symbolises. No wonder she knows right away she wants him,
not Erik. Senta is the prototype of Wagner’s later heroines who equate love
with death, and who find fulfilment in redeeming others. This does reflect in
many ways Wagner’s own predicaments, but the archetype becomes wilder and
more cataclysmic. Kampe probably has the ability to make much more of such
heroines in the future, given the productions that make more of the extreme
intensity – madness, even – in these roles. She’s singing Isolde at
Glyndebourne this summer, which will be something to look forward to.

All photos by Clive Barda courtesy of The Royal Opera House