Lovers, consider Gernando’s problem: He and his Costanza were
visiting a desert island one day, thirteen years ago, when, without a word of
warning, he vanished. Naturally she is peeved. When getting food and shelter
(for herself and an infant sister, her only companion) have not distracted
her, she has spent her spare time carving diatribes against the male sex in
the rock. But he has a perfectly reasonable excuse — he was kidnapped by
pirates! At last he has returned to the uninhabited island (“l’isola
disabitata”) to see if she survives — she does! In sound health, good
looks and a rather chic grass skirt! (Nothing like a healthy diet and lots of
sleep to keep a diva limber.)

You can imagine what Mozart would have made of this absurd situation:
He’d have gone wild, ten minutes at least of bitter reproaches, intricate
descriptions (sung and orchestral) of his agonies, of her
agonies, then joyous resolution as she gradually succumbs to his desperate
pleas of enduring love…. Things would get completely out of hand, the duet
would become a thing ungainly, unbalancing the brief exposition allowed by
Metastasio’s libretto — but, by Thalia, it would be fun! It
would be melodrama! In a Haydn opera, however, nothing is out of proportion
and hardly anything is ever fun, or dramatic, or exciting. The singers are
supposed to supply that, if they can, and the half-fledged cast of the Gotham
Chamber Opera presentation are just not up to it, though they sound pleasant
enough.

They probably trained on Mozart and Handel, and Mozart and Handel were men
whose eyes lit up at the word “theatre” — they knew how to tell a story
on the stage. It was in their blood somehow, and it passed right by Haydn. An
opera to him might as well have been a string quartet with scenery. Hardly
any of his operas were performed in urban centers in his lifetime — they
were composed for the court theater at the country estate of Esterh·za (a
homey little 400-seat affair which today hosts a festival), and at Esterh·za
they remained. That meant they were not written for the great singers of the
day, and also that the scores did not have to woo a popular audience — as
Gluck did, or Mozart, or Paisiello, MartÌn y Soler, Salieri, GrÈtry. One
learns things about opera construction if one’s listeners are paying
customers, throwing tomatoes or simply not returning for more. Modern opera
composers, mostly academics, suffer the same lack of apprenticeship that
afflicted Haydn, with the same effect. Haydn knew it, too — when asked by a
Prague producer for one of his opere buffe, he replied that none of
his works for Esterh·za was suitable for public presentation, and that he
would be wary in any case of trying to compete on Mozart’s territory. 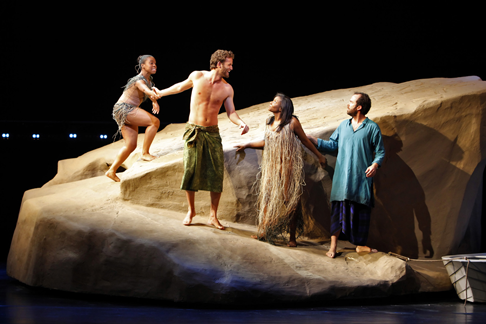 But back to L’Isola Disabitata, which has just been presented by Gotham
Chamber Opera, with great fanfare, in a staging by Mark Morris. The piece was
composed in 1779 (the year of Gluck’s IphigÈnie en Tauride),
shortly after a fire at Esterh·za, and apparently the reconstruction budget
permitted just one set, four characters, and no chorus. The opera is a
succession of arias for four characters whose emotions are both predictable
and shallow. There is one striking novelty, probably inspired by Gluck’s
reforms: the singing is accompanied by orchestra throughout; there is no
continuo to set off dialogue from arias. But Gluck knew how to build tension
and how to bully his librettist into supplying the occasion for such tension.
There is little tension in the score of L’Isola Disabitata. The
opera concludes after a few predictable encounters with a vaudeville quartet
in the French style: each character sings of what she or he has learned, to
variants of a rondo melody, and they depart enlightened. The most famous such
finale is that of Mozart’s Seraglio (1782), which states the moral
clearly, but is enriched by the explosive intrusion (in an unsatisfied minor
key) of the one character who has never changed and never will — to our
thorough delight. Haydn would never have introduced something so tasteless,
even in a farce. (He wrote several; none are performed very often.) 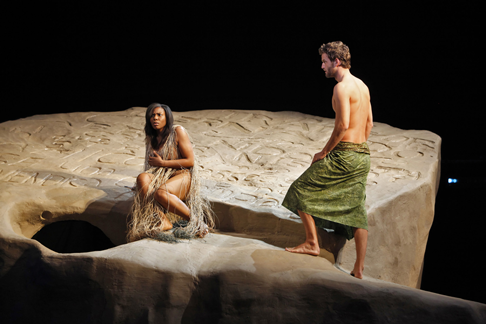 The GCO set was a revolving rock. One problem the cast may have had was in
performing while maintaining balance on this thing, and the contortions
involved in seeing or pretending not to see other characters, as called for
by the script, surely did not help. The only obvious sign of Mark Morris
influence came in hand-jive charades performed by each character in turn
during the final quartet — this was charming, keeping our attention,
heightening the individuality of Haydn’s generic characters, settling the
plot happily.

The young, attractive performers may have left school a few years ago, but
they all sounded like promising music students here. This is not a
compliment: there was little that was “finished” about these performances
and nothing that was deep. Perhaps, again, it is Haydn’s fault: Mozart
gives you characters to play, with human quirks and expressions; so does
Rossini; so does Paisiello. Haydn does not. It’s only play-acting, right?
Why try to make these people real? (An apocryphal story has it that when
Haydn attended the Vienna premiere of Don Giovanni, he realized how
very out of his depth he was and gave up composing opera then and there. It
may be true; Haydn had taste, judgment and good sense; he admired Mozart and
would have grasped his achievement better than just about anyone else
alive.)

For Takesha MeshÈ Kizart, the Costanza, company artistic director Neil
Goren replaced the opening aria with one of Haydn’s many concert arias —
that is, a piece written to suit the talents of an individual singer in the
revival of a longer work written for someone else, a perfectly canonical
practice. But the effect here was not good, as her performance was lackluster
— only her second, rather more agitated aria seemed to wake her up, and her
situation (thirteen years in solitary?) led us to expect rather more
fireworks than she cared to offer. Her spousal unit, Vale Rideout, and his
half-naked sidekick, Tom Corbeil, made pleasant, uninteresting sounds perhaps
awkwardly placed due to their distance from the floor when singing. The only
performer with much charm or distinction was the soubrette, Valerie
Ogbonnaya, as Costanza’s naÔve sister, a “Miranda” figure, whose
innocence of the world (and of men) are intended to give us a thrill of
contrast: she gave her character the light, fresh sound and airy coloratura
proper to the dainty drama. The character is absurd, a sophisticated fantasy,
but she sang and acted it as if it were something worth putting over.

I’m delighted at the notion of a chamber opera company in New York, and
in the idea of exploring lesser-known crannies of the eighteenth century, but
Haydn’s operas are not where his heart, or his genius, lay. With all
possible good wishes for Gotham’s success in its downright heroic work in
the current economic times, the company has made some weird repertory choices
over the years; in the eighteenth century, for one thing, they would be
better advised to examine composers like Paisiello and GrÈtry and MartÌn y
Soler who knew how to write for the stage.

All photos by Richard Termine courtesy of Gotham Chamber Opera