Be that as it may, this first installment of the four-opera Ring slated for completion by the LAO in 2010, was an auspicious event, for not only is it the first production of the work in the 22-year history of the company, but the first “indigenous” Los Angeles Ring as well. Only stagings “imported” by the Met on tour and from San Francisco had been seen in the city previously. Thus excitement was high in the city, and it was heart warming to witness the acclaim brought to Rheingold.
The Ring, of course, has been “in” in America for several decades, so the LAO is merely falling in line. During the current year it will be seen in part in Washington and San Francisco and complete in Seattle. And the Met is about to retire its current production to make way for a new staging to begin next season. Nonetheless Rheingold remains a complex work made even more so by Achim Freyer, the director and designer of the entire LAO Ring.
It’s easy — if a bit tongue in cheek — to attribute the appeal of the Ring to the contemporary relevance of its plot: this god-guy Wotan builds a house that he cannot pay for and the whole world goes to Hell in a handbasket — or in the old-fashioned cartoonesque airplane, in which Freyer sends Wagner’s gods off to Walhalla at the end of Rheingold.
On the heels of so much on-stage color the rainbow bridge called for by Wagner, who wrote his own libretto, would have been at best a pale apparition. As the opera world moved away from the swords and shields traditional in Ring stagings obedient to Wagner, “concept” productions became de rigueur. Stagings that took cues from Marx and Freud were the center of controversy — especially in Germany, where French filmmaker Patrice ChÈreau set new standards of adventure with the 1976 post-industrial Ring that marked the centennial of the work in Wagner’s own Bayreuth mecca.
In this country environmental Rings have decried Wotan’s destruction of the world oak to obtain wood for his spear. The troublesome military industrial complex even in Wagner! Thus the Ring is now open game, and the LAO promised “adventure” with its long-awaited staging.
Although Freyer may have given the company more than its audience bargained for in Rheingold, the enthusiastic opening-night reception has heightened the anticipation already awaiting completion of the cycle. But what has Feyer done to earn this reception? He has — as he sees it — offered not merely an interpretation of Rheingold. He has rather created a companion piece to the work — or even an anti-opera — designed both to realize Wagner’s own intentions and to place his audience at a critical distance from the Ring. To understand this, it helps to know a bit about the roots to which Feyer makes brief reference in a program-book essay. 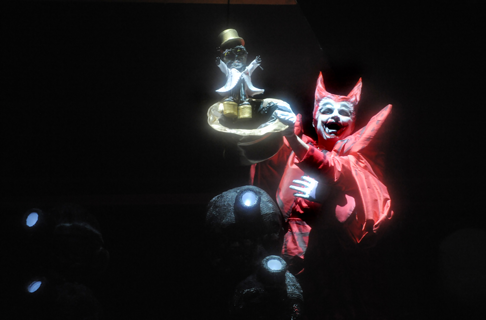 Arnold Bezuyen (Loge)
At 74, the director is old enough to have cut his theatrical teeth in the Berlin Ensemble that was the laboratory of Bert Brecht, arguably the dramatic genius of the 20th century. Freyer makes reference to Brecht’s “alienation theory” that encourages the spectator “to decide creatively which truths are contained in the exemplary strange figures and worlds [of Wagner] for himself.” Although Brecht lived for some time just down the road from the Chandler in Santa Monica, that was long ago, and a modicum of information about his alienation theory is called for.
Brecht spoke of traditional theater as “culinary” — you enjoyed the show — and forgot about it. His “epic” theater — the term stresses the narrative drive of the concept — was didactic and open ended. Conclusions were left to the audience. “That’s not a good ending,” Brecht writes at the end of The Good Woman. There has to be a better one — there just has to be!” His audience left the theater with homework in hand.
So is that what enthralled the Los Angeles audience on February 21. Hardly — or, at best, only in part. Freyer — about that there is no doubt — is talented man with an impressive grasp of the theater, and an audience could not but be impressed by a scrim that ran red with blood following Fafner‘s murder of brother giant Fasolt.
It was a thrill a minute through the 2.45 intermission less minutes of Rheingold. The audience was kept busy watching, but did they have time for the requisite thinking? Moreover, there are many fine touches in this Rheingold, such as the huge eyeball that glows downstage, recalling that Wotan sacrificed an eye to win Fricka.
Central to Freyer’s entire staging is a raked disc that one might see as an act of homage to Wieland Wagner’s first post-war Bayreuth Ring, the production that liberated the work by cleansing it of the traditional trappings that had made Wagner the court composer of National Socialism.
But while Wieland brought to his grandfather’s works the “noble simplicity and calm grandeur” that Winckelmann in the 18th century saw as the essence of classicism, Freyer weighs Wagner down under a hopeless tons of clutter. The singers are for the most part encased in larger-than-life replicas of themselves, from which they occasional step forth. At one point Wotan sings from the belly of the enlarged figure as if he were a Tellatubby.
Freyer keeps his audience guessing, but does the quest for answers only obscure whatever message he is attempting to convey? Clearly, however, this is a Ring in progress, and much will happen to it before it is completed. It is a welcome Ring that will make its mark. But for the moment one can only say: “Stay tuned!”
Whatever one thinks of Freyer’s staging, there is little room for argument about the excellence of the cast that the LAO has assembled for the Ring. In his role debut young Ukrainian Vitalij Kowaljow is clearly a Wotan of tomorrow, and Michelle DeYoung, the world’s reigning Brang‰ne, was a wonderfully feminine Fricka, happily without the markings of the shrew that many expect from Wotan’s often-betrayed wife.
Gordon Hawkins was everything selfish and distasteful that Alberich must be while acquitting himself admirably as a vocalist. Singing, however, from within a huge mask — as did Graham Clark as his brother Mime — he left listeners missing the facial expression so important a part of singing.
Jill Grove delivered Era’s words of warning with motherly concern, and Holland’s Arnold Bezuyen, every inch a flaming god of fire, won the hearts of the audience with his portrayal of four-handed Loge as a trickster god.
Stacey Tappan, Lauren McNeese and Beth Clayton were unusually attractive Rhinemaidens as they sang from billowing expanses of the blue cloth that was their river home.
As brother giants Fasold and Fafner Morris Robinson and veteran Eric Halfvarson sang magnificently, although clumsily equipped with mirrors to exaggerate the size of their faces.
Beau Gibson and Wayne Tigges as brother gods Froh and Donner and Ellie Dehn as their bartered bride sister Freia completed the large and admirable cast.
LAO music director James Conlon, who mastered Wagner during his years in Cologne and Paris, drew superb playing from the LAO orchestra, concealed somewhat in Bayreuth style by a fabric cover over the pit.

The Los Angeles Opera Ring des Nibelungen continues with Die Walk¸re set to open on April 4. Siegfried and Die Gˆtterd‰mmerung follow during the 2009-2010 season. The entire city will join in celebrating the completion of the project with three complete cycles on stage in June 2010.
With a total budget of $32 million, the production is a project of monumental dimensions in these troubled times. Washington National Opera recently announced that due to a lack of funds it will complete its current staging with a concert performance of Gˆtterd‰mmerung.
Placido Domingo, who sings Siegmund in Los Angeles, is general director of both companies.
For information and tickets on the LAO Ring, call 213-972-8001 or visit [www.laopera.com](http://www.laopera.com).
Wes Blomster

All photos by Monika Rittershaus courtesy of Los Angeles Opera