Despite the sensational impact Menotti’s The Consul
had when it premiered in Australia in 1953 — making a star out of Marie
Collier — it was revived professionally only once more in 1985. Even
Menotti’s perennial Christmas favourite Amahl and the Night
Visitors has had few professional productions. Consequently the 2007
production of AndrÈ Previn’s A Streetcar Named Desire was a
significant event.

Previn has composed vocal music and music theatre often during his long
career but for his first, fully-fledged opera, he has approached the task from
an area he knows better than most other opera composers. When the work
premiered in 1998 commentators considered the music and approach, with its many
jazz references, to be more akin to cinema in style and form. Listening to the
way Previn’s score fits the stage action and libretto it is indeed very
cinematic and works in the same way a skilled screen composer (which Previn is)
underscores action, giving the visuals a musically dramatic undercurrent equal
to the emotional content of the scene. Musically it is very approachable, with
overtones of Copland, Barber, Menotti, Britten and Previn’s very
knowledgeable synthesis of American jazz in its make up but never as derivative
as some commentators would make it out to be. Very soon one becomes accustomed
to the music and style and it appears that vocal lines are created out of the
musical undercurrent rather accompanied by it. Not that Previn does not create
arias per se. There are many solo moments or aria and arioso, the earliest
being when Stella (Antoinette Halloran) describes to the astonished Blance
(Yvonne Kenny) her unconditional love for the brutish Stanley (Teddy Tahu
Rhodes). Cradled in music of great beauty and lyricism Previn creates a mood
within the orchestra as an arching and aching commentary under Stella’s
attempt to make Blanche understand her love. As important as the sung music are
Previns’s preludes and interludes. The prelude includes jazzy chords that
recur and represent, like a motive, Blance Du Bois doom. The interludes, like
those in Menotti’s The Consul, hold or develop the action of a
scene and seamlessly develop it into the next.

Tackling such a landmark drama as A Streetcar Named Desire was a
brave and almost heroic undertaking but Previn’s confidence and skill
have made it one of the better American operas of the last twenty years, if not
one of the best since Samuel Barber’s Vanessa of half a century ago. Like
Barber, Previn has the compositional nouse to make time stand still, even when
the imminent tragedy is piling up. Blanche’s “I Can Smell the Sea
Air” — in the play just another Blanche’s hopeless and
self-deluding rambles — appears in the opera as moment of stillness and
beauty (as well as a tragic indicator) and not surprisingly started to gather
as much popularity as a stand-alone concert item as the more outgoing “I
Want Magic”. 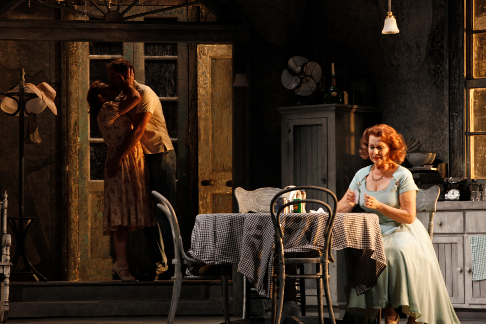 Blanche is opera’s tragic protagonist, just as she is in the play but,
as with the play, her antagonist, Stanley Kowalski almost overtakes her. Teddy
Tahu Rhodes has made something of a name for himself in the role both
physically and vocally. He first undertook the role in Washington and later in
the Viennese premiere in March 2007 and then in the Australian later that year.
His well-known physical credentials are perfectly suited to the role as is his
deep and well-focussed baritone. Here he lessens that focus giving it a blunt
edge for Stanley’s frequent and violent outbursts. Philip Littell’s
libretto follows the play text with often slavish faithfulness and Little
retains enormous amounts of the original text in, what can sound when it sung
rather than spoken, rather banal. In his earliest appearance, and already
displaying his contempt for Blanche’s pretentious mannerism,
Rhode’s voice sounds almost cavernous in darkness and depth. That their
relationship will end in one of the most frightening assaults in theatrical
literature seems almost pre-ordained from the moment Rhodes opens his mouth. In
the scene leading to Blanche’s assault he goads and threatens her while
Previn’s music, now keenly integrating the vocal and orchestral fabric
into an explosive scene with the same cathartic power as the verismo operas of
the early twentieth century. These final two scenes are a genuinely disturbing
experience to watch. Even the though the opera has been served well by a
recording taken from the premiere, it really needs to be re-recorded to
preserve the boiling, aggressiveness of Rhodes’s interpretation.

Blanche is rightly the opera’s heroine and Yvonne Kenny achieves her
best work in the many introspective moments. Only the most dramatic moments
appear to tax her voice but her interpretation of “I Can Smell the Sea
Air” is ravishing. Mad women and mad scenes are noting new to opera and
the pathos of Blanche Du Bois’s final scene is as good as any of them.
Caressing the final floating high notes of “I Can Smell the Sea
Air” she is minutes later pinned to floor by the madhouse nurse and
finally lead away in final scene as disturbing in its pathos as the brutality
of the rape scene that precedes it. 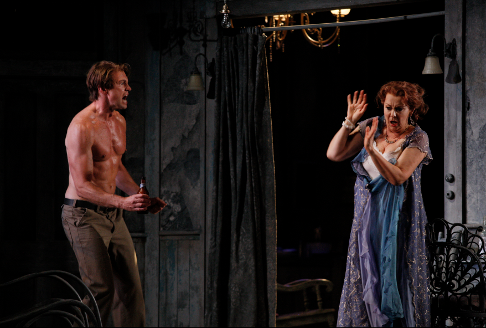 Stuart Skelton is another singer of international status. Fresh from a
recent triumph in Sydney as Peter Grimes, he brought the same naivety to his
interpretation of Mitch. The hopeless desire for and then cruel rejection of
Blanche even harks back to the scenes between Grimes and Ellen Orford in
Britten’s opera.

As Stella Antoinette Halloran is in the same vocal league as her
internationally known colleagues. Her singing is constantly subtle and is
beautifully supported soprano. Halloran features in a disc on the Australian
label ABC Classics of Puccini arias and duets and which is worth seeking out,
hers is a voice to listen out for.

The opera’s hothouse atmosphere is well captured by John Stoddart
sets; seeming to be mouldering through years of damp and neglect although there
is no suggestion of Blanche’s cramped and curtained sleeping quarters.
The State Theatre stage is larger than its more famous Sydney counterpart and
the revolving set sits within the larger area concentrating the attention to
stage action. The director, Bruce Beresford, has, like Previn, had a long in
motion pictures and, as a film director, understands the importance of a
musical undercurrent. He achieves many detailed effects despite working on a
large stage and even employs film projections in key moments to clever
effect.

This current revival is a significant event in the company’s
repertoire development and hopefully signals that the production will now
remain Opera Australia’s permanent repertoire.

All photos by Jeff Busby courtesy of Opera Australia