Not only is the hero a half-mad drunkard, he
spends the Prologue poking fun at a crippled dwarf (impersonated by a crouching
waiter in the Met’s new production), and the plot makes nasty reference
to many another illness, deformity or crippling disorder. Stammers, deafness,
simple-mindedness and a hump afflict the four servant roles generally assigned
to one character tenor, while the heroines — Hoffmann’s loves
— are consumptive, soulless, faithless or simply robotic. The four
villains and the hero’s only friend are evidently supernatural which may
not count as a handicap. Science, society and medicine are debunked and
defiled. The libretto even contains a few swipes at the egos of opera singers.
The conclusion of this odd comedy is bitter — despairing of love,
Hoffmann takes refuge in drink and in creativity — though in the edition
currently on view at the Met (no two Met productions of the work have ever
played quite the same score, of which no definitive edition exists) an
uplifting choral conclusion has been added to placate us.

Bartlett Sher’s stark but handsome production of Hoffmann,
like many other creations of the new Met regime, faces the challenge of
following a venerable, popular and attractive one. Why did Otto Schenk’s
wacky box of goodies need replacement at all? Who can forget the rathskeller
that sank into the stage, or the shop of dizzy, whirling mechanisms that slowly
moved downstage to take its place during the gavotte, or Crespel’s blue
Biedermeier drawing room with its walls permeable to the demonic Dr. Miracle?
Well, we’ll have to forget them because the world moves on, and new
varieties of stage magic are in constant demand. 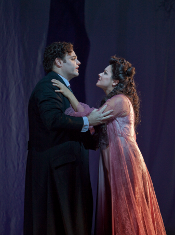 Joseph Calleja as Hoffmann and Anna Netrebko as Antonia

Sher’s innovations, which are handsome and amusing, may prove less
expensive to keep in shape, relying as they do on projections and a few simple
descending flats. One small arched doorway and three gothic windows —
plus a lot of cushions and a gondola sliding by mid-stage — are enough to
evoke Venice, right? More can often be done with less, and Sher has made that
his watchword. In Act II, for instance, Munich was suggested by wintry light
and a few transparencies, a chair and a spinet. At the opening of Act III, the
audience gasped and cheered as the curtain rose — and yet all we saw was
an array of lanterns, a swagged gauze scrim, that narrow Venetian flat, and a
crowd of singers, dancers, supernumeraries strewn about the stage in attitudes
of artful clutter, dressed in elaborately diverse costumes — hey,
it’s Carnival! — a dozen or so wearing hardly anything, and
implying still less by some Fosse-esque callisthenic dancing. Dress and
lighting are all. The set dazzles without actually being a set, as
insubstantial as the feverish workings of Hoffmann’s brain. The opening
scene, a tavern next door to an opera house, was similarly devised, all kegs
and tables and benches, while the rear of the stage lit up when necessary with
a projection of the Old Met — and Hoffmann’s desk strewn with
unfinished manuscripts was downstage right and remained there most of the
evening. Those who recall the Schenk production may remain sentimental, but
those new to Hoffmann will not feel they missed anything in the way of
glamour or storytelling.

Does anyone other than opera and ballet lovers still read E.T.A.
Hoffmann’s once popular stories, also the source of Tchaikovsky’s
Nutcracker, Delibes’s CoppÈlia, Hindemith’s
Cardillac and Offenbach’s Le Roi Carrotte? Poe knew
Hoffmann’s stories well; they are as grotesque as Poe, but lack the
psychological tension that gives Poe’s work its sense of undercurrents
untold. 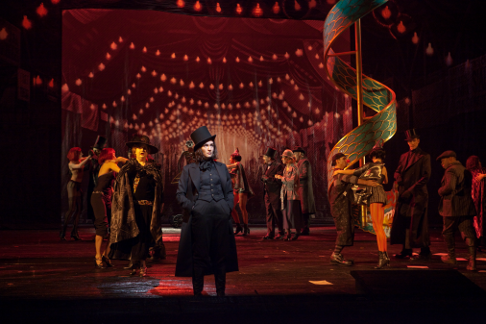 It is Sher’s conceit to meld Hoffmann’s genius with that of the
far more familiar Kafka, with whom he has little in common except an openness
to the fantastic. Kafka’s tales, though they share Hoffmann’s
unease with the inhuman novelties of modern technology that make many sensitive
souls feel lost in a rapidly changing world, are more metaphorical and
political, rarely just odd for odd’s sake as Hoffmann’s often are.
But this permits Sher to set his Hoffmann in Kafka’s 1920s for,
seemingly, the sole reward of having the non-singing La Stella enter in flapper
dress, and in order to place an iconic typewriter on Hoffmann’s desk. At
least the prologue and epilogue are set in the 1920s — the Munich
(Antonia) scene appears to be set in the 1820s, and Venice (Giulietta) the
eighteenth century, but since Hoffmann is supposedly inventing these tales as
he tells them, we can blame his wild imagination for any conflict. Catherine
Zuber has costumed the robot Olympia in clown getup and a red-violet wig, the
consumptive diva Antonia in a dressing gown, the courtesan Giulietta in
panniers that look neither sensual nor comfortable. Hoffmann wears his usual
frock coat and Crespel a wonderful nineteenth-century smoking robe and
shako.

The directorial conceit offers many felicities — I loved the
horse-drawn carriage that brings Dr. Miracle to Crespel’s door, and the
winding green dragon in Spalanzani’s workshop that continues to spiral
throughout the act — but also many puzzles. Nicklausse seems to be
playing both sides in Sher’s vision — granted he/she is the Muse
who wishes to blight Hoffmann’s love life in order to keep his genius
feeding her lust for art, but here she is truly the Devil’s Advocate,
supplying the villain with the ingredients of his manic destructiveness,
handing the doctor his flasks, the inventor his spectacles, Dapertutto the
diamond to tempt Giulietta, remaining on stage to manage the wickedness in
scenes where Nicklausse has nothing to sing. This is distracting, but a real
offense is the hymn to salvation through love tacked on to the epilogue,
derived from the Muse’s final song, when the moral of the story the opera
tells, and the motivation behind all of the Muse’s behavior, is that love
is empty, that only by his creative genius can Hoffmann be redeemed. The new
ending feels false and wrong.

Joseph Calleja undertook to learn the long and strenuous role of Hoffmann
when Rolando Villazon’s career crashed and burned last winter. The
Maltese tenor is tall and sturdy and a passionate actor, with a wide range and
a wonderful liquid top, but at the second performance of the run he sounded
uncomfortable, perhaps merely tired, at many points of the evening, a shade
under pitch and with the beginning of a bleat that could be either exhaustion
or affectation. Considering the pressures leading up to this premiere (he was
obliged to withdraw from the dress rehearsal by illness), I am hoping this less
than ideal occasion was simply an off-night. But the part may be too heavy for
him. 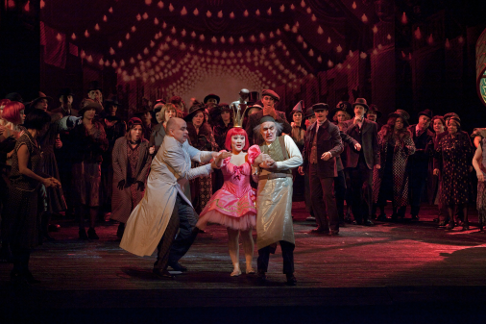 The trouser role of Hoffmann’s pal, Nicklausse — who is secretly
the Muse of Poetry — has been increasing steadily from edition to
edition. On this occasion he/she was elevated from sidekick to prima donna, and
Kate Lindsey, young, slim, attractive, with a dark, flawlessly placed mezzo
soprano and a range of expression from foolish to satirical to sympathetic,
gave it star quality. Although the role is now longer than it ever used to be,
she was almost the only singer of the night who never seemed to be struggling
for enough breath to support whatever phrase she cared to sing, as loud as
might be needed or as softly, persuasively as the drama called for.

Hoffmann’s loves were portrayed by Kathleen Kim, Anna Netrebko and
Ekaterina Gubanova. Kim is tiny, charming, pleasant and occasionally shrill as
Olympia, the rare role that is easier to sing than it sounds. (I’ve
seldom heard a bad one; Natalie Dessay was the best.) Gubanova produced
seriously deep, Slavic tones that gave pleasure when not wobbling, but how
useful these were to characterize the shallow Giulietta may be doubted.
Netrebko sang the most powerful Antonia since Sutherland, and in Sher’s
vision (which is not Offenbach’s), her grand operatic posturing worked
very well. As in all her roles in French or Italian she sounded, frankly,
Russian — something in her manner of creating a phrase is taught in the
east, not in the regions where western music was composed. She was wise not to
attempt all the heroines.

In this production, there is no attempt to make the four villains look
unalike — they are the same man in the same black leather duster, and
Hoffmann’s insistence that they are one and the same (and the Devil)
therefore strikes us, as it should, as a sign of mental imbalance, of fixation
on the fellow in the Prologue who will run off with his girl in the Epilogue.
They were sung by shaven-skulled Alan Held, who looks tall and ominous even
beside tall Mr. Calleja, but he sometimes seemed to be pushing to fill out the
part’s diabolic phrases, high notes were evaded in “Scintille,
diamant,” and recollections of James Morris in these roles remain golden
and unequaled.

While Mr. Held was the same demon in four acts, Alan Oke played the four
ridiculous servants with impressive diversity, from AndrËs’s mincing
venality to Pitichinaccio’s shambling menace — he even appeared to
be short as Frantz, and sang that character’s little song with an
exceptionally strong and flavorsome tenor.

James Levine, who is evidently responsible for the choices among editions of
the score (there is no version of Hoffmann that someone will
not denounce as inauthentic), conducted with a sure, tight hand: the demonic
leitmotiv came over as just that, but the “numbers” that
traditionally draw applause did so — when they deserved to. The
Met’s chorus were splendid and their dancers always work best when their
work is not center stage but merely accompanies a drama focused elsewhere.