Paris in the
opening years of the twentieth century is evoked in shifting venues from the
Petrovenian embassy in Act I to the widow’s mansion and to Maxim’s
in Acts II and III. The widow Hannah Glawari is sung by Elizabeth Futral in a
performance ranging from touching sentimentality to lyrical purity and joyous
sparkle in duets and ensembles. Her suitor from the past, Count Danilo
Danilovich, as portrayed by Roger Honeywell moves convincingly from the
pleasure-seeking rake to the man who still loves Hannah despite circumstances
that interrupted their earlier courtship. A secondary romantic involvement is
pursued between the married Valencienne and her admirer Camille de Rosillon,
sung and acted plaintively in this production by Andriana Chuchman and Stephen
Costello respectively. A large supporting cast is drawn into the comedic and
wistful resolution of Hannah’s fortunes and amorous interests. 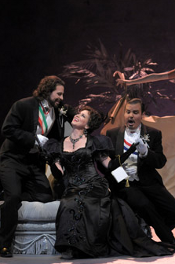 After a spirited orchestral introduction led by conductor Emannuel Villaume
the first act of Leh·r’s operetta introduces both celebration and
conflict. This scene, as staged in Lyric Opera’s new production,
communicates an appropriate amount of business, replete with arrivals, wooing,
and worries over the homeland. Baron Zeta broaches this latter topic by
accepting congratulations in behalf of the Petrovenian head of state while at
once lamenting the precarious financial issues of the homeland. In his
portrayal of Zeta, Dale Travis assumes a Central European accent and delivers
an effective mix of enthusiasm and anguish. After summarizing the economic
concerns, he insists that the recently widowed Hanna Glawari must remarry a
Petrovenian citizen so that her inheritance might remain in the domestic
treasury. During Zeta’s distracted narration of such details his wife
Valencienne is subjected to the repeated attentions of the nobleman Camille de
Rosillon. Although obviously flattered by these advances, Valencienne expresses
her irritation when Camille writes “I love you” on her fan. In the
duet “Listen please” Valencienne reminds him of her intentions to
remain faithful to her husband Zeta and suggests that he marry another.
Chuchman and Costello fulfill the individual roles of Valencienne and Camille
admirably yet their vocal and dramatic talents seem transformed to a still
higher level when they sing together. In this first duet they epitomize the
conflicts of love and duty as their voices blend to communicate a convincing
emotional fervor. 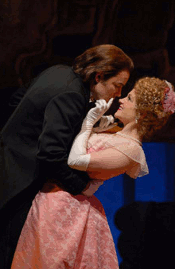 Once the young couple leaves, the widow Hanna Glawari appears, trying to
deflect the repeated attempts at adulation from men who wish to curry her
favor. In her first aria (“Gentlemen, how kind”) Ms. Futral strikes
a balance between a woman who demonstrates a vocally receptive sense of being
flattered and the realistic widow who suspects any suitor of opportunism. As
Hanna, for the present, leaves and repeated calls for Danilo’s needed
presence are sounded (“Affluent widows double in charm”), the
bachelor enters a near-empty stage. While staggering in apparent inebriation
from the top of a staircase Roger Honeywell portrays Danilo not so much as
dissolute but rather as one avoiding the confrontation of daily responsibility
by losing himself in the swirl of activity at Maxim’s. In his aria
“Oh, Fatherland” Honeywell muses with wistfulness on the duties of
a minor nobleman that he fulfills for his country, but activities of the
evening cause a suspension of the sense of homeland. When Hanna reenters she
finds Danilo, in utter exhaustion, asleep on a divan. Ms Futral attempts to
mask the surprise of Hanna, just as Mr. Honeywell’s Danilo can only
appear confused while he recovers his composure. A renewed attraction between
the principals, interrupted by the realities of an earlier, societal marriage,
is evident for a moment before distance again sets in. Danilo insists that he
will never express love for Hanna, while others vie for a dance with the widow.
When she suggests such a dance with Danilo, he offers it to any other man for
10000 francs. Hanna is incensed and Danilo seems, at first, resolved in his
sullenness. Yet Honeywell shows his character softening, and both agree finally
to the proposed dance. As the act concludes Hanna and Danilo, as portrayed
here, seem temporarily reconciled, if only for the evening, in a dance and song
that bears a glimmer of more for the future.

In Act II of the operetta the action takes place in the garden of the
widow’s Parisian home. Hungarian dances are performed first to celebrate
the ruler’s natal day: in Lyric Opera’s production both colorful
costumes and skillful choreography assure a lively introduction to the
celebration. As an extension of these festivities the widow sings the
traditional Hungarian song of the vilja. Ms. Futral performed the
justly famous song of the wood-sprite, or vilja, with moving emotional
force. As she described the feelings of the huntsman who becomes enamored of
the sprite in the forest, Ms. Futral’s character itself seemed to bloom,
so that buried emotions could again be kindled. A further encounter with
Danilo, who arrives to participate in the widow’s reception, contributes
to renewed confusion and bruised emotions, with both characters stomping away
in opposite directions. The scene is then left to the naÔve pair Valencienne
and Camille, who both avail themselves of the solitude to discuss openly the
state of their love. Despite the protestations of Valencienne, Camille
serenades her with the aria “Just as the rosebud blossoms in the light of
May.” Mr. Costello flourished here as an ardent lover in the solo aria in
which his vocal modulations and use of legato were especially well received.
The two withdraw into the garden’s pavilion in time for
Valencienne’s husband Zeta to return and peer curiously into the
enclosure. Although he at first believes that he sees his wife with Camille,
Hanna changes places with Valencienne in order to save her reputation. The
widow and Camille emerge from the pavilion declaring their intention to marry,
an announcement which confuses Zeta and irritates even further Danilo. Mr.
Honeywell gave convincing expression to his pique in the aria “Fall in
love often,” as he rushed off at the close of the act to console himself
in diversion at Maxim’s. 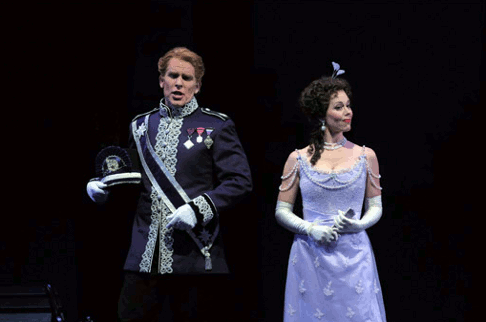 It is indeed here at Maxim’s that the numerous conflicts and emotional
tensions are ultimately settled during Act III of the operetta. After the mood
is set by an orchestral introduction including strains from the “Merry
Widow Waltz,” we see the various girls of the club along with Valencienne
dancing to entertain Danilo. Further communication from the homeland prompts
the widow to admit that she never intended marriage to Camille and that her
motives consisted in the protection of another woman’s honor. At this
Danilo admits his love for Hanna, and they sing the duet “Strings are
sighing.” Futral and Honeywell express their bond, leading eventually to
the consent of marriage, in touching unison as they conclude aptly on the lines
“We’ve gone soaring to the heights” and “It’s you
I love alone!” Only the breach between Valencienne and Zeta must be
repaired. When the jealous husband discovers the fan on which Camille had
written of his love, Valencienne convinces Zeta to read the declaration on the
reverse: “To my loving husband from his adoring wife.” All is now
well in the emotional world of The Merry Widow, as depicted in Lyric
Opera of Chicago’s delightfully musical production.