Simon Boccanegra excited his particular ire: he would
waste three or four paragraphs trying to figure out the plot and then toss out
the name of a singer or two. How many people do go to a Verdi opera for the
sake of the plot? I hoped he was the only one — but the other night, on
the bus down Broadway after this latest Met Simon, I heard a couple of
opera-goers complaining that they found Simon more incomprehensible
than Trovatore (I find Trovatore crystal clear, by the way),
and an old friend said, “How come Fiesco, after twenty-five years in
disguise, just happens to become the guardian of an orphan who just happens to
be his lost granddaughter?” This is, of course, a stumbling block, what
the French call, translating another Verdi opera, La force de la
coÔncidence. You should do what Verdi did with such absurdities: Ignore
them and focus on the music. The plot is not what the opera is about —
not this opera.

What Simon is about — besides the father-daughter theme (here
also grandfather-granddaughter) always explosive in the operas of the childless
Verdi — is color. The prologue, for instance, set in an alleyway in
fourteenth-century Genoa, includes confrontations among four characters, not
one of them of a higher voice than baritone. Even the offstage women’s
prayers for the dead are offset by a basso Miserere. All the murky political
and personal doings are shrouded in shadow, and this shadow only dissipates in
Act I against the shimmering dawn-over-the-sea music of Amelia’s aria,
yet even her happiness at the beauty of the scene and at finding true love is
intruded upon by minor-key forebodings. The whole opera is prevailingly dark,
with only the shimmer of the sea, the warmth of the glorious father-daughter
duet and the occasional beacon of the one soprano voice in the great crowd
scenes that end Acts I and III.

I call this Verdi’s “light-in-the-darkness” period, a
series of experiments he made in tonal color by setting a single soprano to
shine out over massed crowds of dark sound. Thus we have Leonora’s
“Vergine degli angeli” in Forza, Oscar’s high melody
in “E scherzo od e follia” in Ballo in Maschera, the
Celestial Voice in Don Carlos, the priestess in Aida. The
effect is to make the drama personal, to remind us that amidst the mobs
carrying us along in life’s big events, the individual soul is suffering
individual anguish. Leonora de Vargas isn’t just joining the monks in
prayer — she has her own guilt to expiate, her own questioning of
God’s purpose; Oscar is not merely apprehensive at the witch’s
prophecy, he is a believer in her powers, which suddenly seem to threaten his
beloved sovereign; the priestess does not merely hope for the triumph of the
choral manhood of Egypt, she seems to be making a direct appeal to
“immenso Ftha” for divine favor. 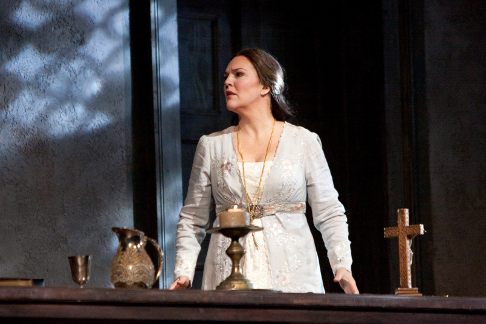 In Simon Boccanegra, God is not the problem; politics are —
to the point that Amelia’s personal problems could be overwhelmed in mob
violence, here vocalized. But all politics are local, and Verdi presents the
individual point of view by having her soprano trill through the dark
concertato that ends Act I, her descending arpeggio of mourning riding free
beside her father’s deathbed in Act III. Verdi has evoked the darkness of
grim scheming and civil conflict, but Amelia’s voice reminds us of
individual experience and personal loss.

My Amelias go back to Gabriela Tucci and have included Maliponte, Arroyo, Te
Kanawa, Mattila, Guryakova and Gheorghiu — all superb except the last,
whose voice seemed small for Verdi in a room the size of the Met. On this
occasion, Amelia was sung by Adrianne Pieczonka, a handsome woman whose voice
is cool, lovely, and sizable without audible effort, but her “Com’e
in quest’ora bruna” was uneven, with a swoopiness whenever she
leaped above the staff that was also present for the rest of Act I. In her duet
with Domingo (is there a lovelier father-daughter duet in all Verdi?), she was
better when leaps were not required of her, but the great trill in the
concertato was mud. She warmed up in Act II, and the arpeggios that must gleam
at Simon’s deathbed did so. It was not clear whether the Canadian soprano
was having a difficult night or was simply miscast. The Met needs a Verdi
soprano with a voice this big and beautiful, but she should be in better
control of her instrument.

Pl·cido Domingo’s decision to take on the baritone doge’s role
(not his first such exploration at the Met — he has sung Gluck’s
Oreste here) was surely the reason the Met was packed, and the crowd was so
unfamiliar with the opera and with the baritone color in which he sang that
they failed to greet his initial entrance with intrusive applause —
bravos all round for that! The applause (and flowers) at evening’s end
made up for that to be sure. His performance was more than satisfactory —
from a tenor-out-of-water at nearly seventy, it was a far more finished a vocal
interpretation than, say, JosÈ Cura’s Stiffelio. Domingo has always been
a baritonal tenor — to the frustration of those tenor-lovers who like the
near-desperation certain voices make in attaining high notes. Domingo recorded
bits of Rossini’s Figaro and Verdi’s Posa long ago, but Simon is
one of Verdi’s signature baritone parts. There was a sense that the lower
depths, the baritonal resonance, the depth and echo, were not well served, that
he does not resonate there — but he was on pitch and in character,
clearly enjoying his interactions with old friends like James Morris and James
Levine. 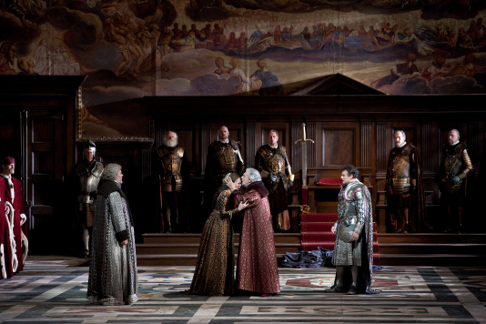 Marcello Giordani sang like a god in Act I and grew a little sloppy
thereafter, though without the strain and pitch problems that have sometimes
dogged him in Donizetti. Verdi is the right place for him.

James Morris no longer sings Wotan or Hans Sachs, but his Fiesco reminds us
that in his early decades he was known for his Mozart and bel canto. No longer
having great caverns of voice to draw upon, he husbanded his resources well and
sang on the lighter side of this dark role, without wobble and without
disgrace. Patrick Carfizzi made an appropriately histrionic Paolo, the slimy
fixer of Genoa, catching the character’s inner torments and rages with a
serene Verdi line. Paolo is often an apprentice Simon, as Ford is an apprentice
Falstaff, and Carfizzi should be interesting when he takes up the title
role.

In James Levine’s capable hands, all the parts of this subtle score
interacted smoothly whether the singer was staring only at him — as
Domingo usually did — or not. The music of the great duet seemed to
breathe with the surf rolling into Genoa, and Verdi’s intricate games
with strings and winds created a sense of symphonic mood, a pervading unease
highlighted by the thundering brasses he would use again and again in the
operas that followed.

Giancarlo del Monaco’s production in Michael Scott’s colorful
sets does not clarify the complicated plot, beginning as it does in
fourteenth-century Genoa (as Verdi desired) and then apparently lurching to
seventeenth-century Venice in the Council Chamber scene for no reason except
that Tintoretto on the ceiling looks pretty and nobody knows what the Genovese
council chamber did look like. Peter McClintock has elided some of Del
Monaco’s more hamhanded bits of direction — crowds move
naturalistically, a happy change, and Fiesco no longer draws a sword to rush at
Simon three times in the course of the opera; only once. Still, as he never
does lay a paw on him, these madcap outbursts tend to make Fiesco look
ineffectual at best. Verdi intended Fiesco to possess a dignity evidently
beyond Del Monaco’s narrow imagination.