Despite the countless articles on
Louis’s life and career that appeared in newspaper sports pages and
gossip columns of the 1930s through the 50s, his 1978 autobiography, My
Life, was the only public statement the boxer ever made about his personal
life. The nature of opera is to delve into human psyche, but we know so little
about Joe’s innermost thoughts and feelings — how could it be possible to
write an opera about one of organized sports’ most notoriously silent
figures?

Composer Frank Proto, librettist John Chenault, and director Leon Major
struck out to do just that. Shadowboxer is an opera that addresses the
issues of racial stereotyping and segregation, the blessing and curse of modern
celebrity, and one man’s struggle to overcome his inner demons to become
a hero to millions of his fellow Americans. As an elderly Louis (a role split
between Jarrod Lee as Old Joe, Duane Moody as his younger self, and Nickolas
Vaughn as Joe the Boxer) looks back on his life, he remembers both the
tragedies and triumphs he experienced as an African-American in a sport
dominated by white athletes. The opera is comprised of flashbacks that occur in
Old Joe’s mind, and many of these memories bleed into the
character’s reality. These trips down memory lane focus on the
boxer’s early career, Joe’s marriage to Marva Trotter (Adrienne
Webster), and his famous bout with German boxer Max Schmeling (Peter
Burroughs). Shadowboxer chronicles Joe’s philanthropic
contributions to the US armed forces during WWII, the discrimination he
experienced during his enlistment in the US Army, and his financial ruin at the
hands of the Internal Revenue Service. The opera fast-forwards to Louis’s
descent into substance abuse and madness and the revival of his celebrity
status in his later years. Though he led a turbulent and somewhat sad life, Joe
Louis’s ascension to the throne of the world heavyweight boxing
championship made him a true American hero at a time when the country was
firmly divided along racial lines.

Librettist Chenault sees the title Shadowboxer as having a double
meaning: “[The term] shadowboxer fits with the boxing world… but
in particular reference to Joe [it makes us ask] how do we peer behind the
curtain, how do we move that aside and look at the interior life of Joe?”
An exploration of the mind and spirit of such a well-known but private
individual is both a confining and liberating task. To interpret the factual
account of a life through the medium of opera is, in some respects, liberating;
through music and words, Proto and Chenault create an emotional context for
historical events. On the other hand, the distillation of a real person with
complex emotions into an operatic performance of a few hours is somewhat
constricting. Chenault, a poet and playwright, studied Louis’s
autobiography, and much of his libretto comes from Joe’s own words.
Proto, Chenault, and Major chose to place the 1938 Louis-Schmeling fight at the
center of the work and present the rest of Joe’s story as an ascent to
and decent from this historic event.

The music of Shadowboxer sets this work apart in the world of
modern opera. Proto’s inclusion of an on-stage eight-piece jazz combo in
addition to the full pit orchestra is unprecedented, and he uses this ensemble
to great effect. It is not uncommon for jazz to inspire operatic music –
composers like Max Brand and Ernst Krenek of the German Zeitopern
tradition incorporated elements of jazz and popular music into their works of
the 1920s and 30s, and George Gershwin’s Porgy and Bess makes
use of jazz rhythms throughout its entire score. Rather than taking on a
secondary role, however, jazz exists side by side with traditional operatic
music in Shadowboxer. Although this work does not feature any 1930s or
40s jazz standards, Proto says its music is “descended” from the
music of the time when Joe Louis was in his prime, and the onstage jazz band
takes on a life separate from its counterpart in the pit. 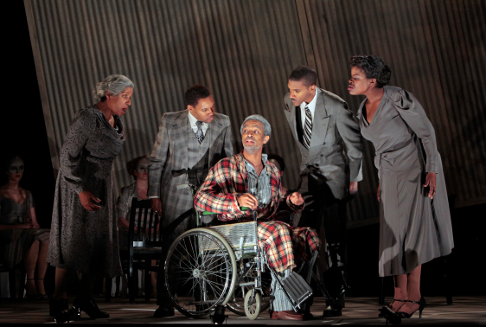 Proto’s imaginative score is a versatile vehicle for the University of
Maryland Opera Studio. Featuring a cast of performers, including graduate
students in the UM Opera Studio, undergraduate voice majors, Opera Studio
alumni, invited guest artists, and UM faculty (Professor Carmen Balthrop is
stunning in her role as Joe’s mother, Lillie Brooks) Shadowboxer
is accompanied by student instrumentalists. This world-class production leaves
no doubt in my mind that these musicians are professionals of the highest
caliber. Webster and Balthrop give outstanding vocal performances, as does
VaShawn McIlwain in the role of Joe’s trainer, Jack Blackburn. All of the
soloists are extremely competent, although some have problems with projection.
Proto’s choice to add eight extra instrumentalists on stage level places
them in direct competition with the singers for that sonic space, and some do
no project well over the jazz combo accompaniment. While Lee’s portrayal
of Old Joe is beautifully acted and impeccably sung, he is sometimes
overpowered by the instrumentalists. At times, the audience is forced to rely
on the closed captioning shown on screens placed to the left and right of the
stage to follow the dialogue. This necessity becomes distracting, and I found
myself watching the screens during the scenes featuring Joe’s paramours
(Madeline Miskie, Amelia Davis, and Amanda Opuszynski) to catch all the words.
Balance issues aside, the cast members do an excellent job communicating with
the audience through their commanding stage presence. The transcendent nature
of this abstract work requires performers that connect with the audience, and
this group rises to the challenge.

The production of Shadowboxer exists firmly in the tradition of
modern opera. The set features a deconstructed boxing ring, complete with
lights and ropes strung at odd angles, and the canvas is represented by three
large white screens that hang at the back of the stage. In addition to
providing context for an opera about a boxer, this set provides a backdrop for
the projection designs of Kirby Malone and Gail Scott White. The practice of
replacing sets with projections has been widely used in modern opera
productions of the past decade, but director Major had a different vision for
the incorporation of this technique. Rather than illustrating Louis’s
life through a series of images, Malone and White’s projections serve as
snapshots of his memory that support the singers and provide a context for the
action. The projections contribute an element of realism by weaving familiar
images (like the bombing of Pearl Harbor and the Nazi occupation of Europe) in
with Old Joe’s abstract recollections. Projections also facilitate an
imaginary exchange between Old Joe and boxing legends Muhammad Ali and Jack
Johnson. Ali and Johnson are represented by a trumpet (Brent Madsen) and tenor
saxophone (Anthony Bonomo), rather than singers, and their words are projected
on the screen backdrops. Bonomo’s and Madsen’s improvised solos are
masterful and compelling, but their scene still seems out of place, as it has
no parallel in the rest of the work. A return to the quasi-reality of
Joe’s memory seems confusing after this unreal exchange. Even in an opera
that takes place almost entirely in one character’s head, this sequence,
in my opinion, is too abstract.

Overall, the UM Opera Studio has staged an excellent production. In the
words of conductor Tim Long, “It’s really nice to be working on a
new opera…because you don’t have to fit the mold of what people have
done for centuries. We can create that mold.” This work is a breakthrough
modern opera, and hopefully future productions will follow in the footsteps of
the visionary artists who created Shadowboxer.

All photos courtesy of University of Maryland — College Park