The unexpected subject matter, juxtaposing the seedy
world of boxing with the sophistication of opera, is bound to raise a few
eyebrows. However, it contains topics typically found in opera: love, betrayal,
sex and scandal. Every aspect of the show – music, lighting, costumes,
staging, and audio-visual effects – is carefully designed to create a
story which takes place in the abstract reflections of Joe’s memory. The
unique subject coupled with Leon Major’s brilliant staging, an
exceptional production team, and a crew of fresh, young voices, provides an
intriguing and gratifying night at the opera.

The libretto, created by John Chenault, is not just a chronological
biography of Joe’s life; the story begins just before Joe’s death. Continually
jumping through time, the opera explores moments of triumph and the moments
where the protagonist allows his demons to prevail. Through the journey, we are
introduced to three Joe’s: Old Joe in a wheelchair (Jarrod Lee), young, vibrant
Joe eager to tackle the world (Duane A. Moody), and boxing Joe for the fight
scenes (Nickolas Vaughn). On the surface, clear racial tensions are addressed,
but there is more to Joe’s story than the trials and tribulations of an
African-American trying to succeed in a white world. From Joe’s
perspective, we witness his vulnerability to women, his issues with the IRS,
and the unjust title of democratic symbol the US media placed upon Joe during
World War II. This “CNN opera” is much like John Adam’s
Nixon in China, in that we see the real Joe behind the media
portrayal, allowing the audience to formulate their own perceptions of Joe
Louis.

As Old Joe’s impending death draws near, ghosts from his past begin to haunt
him. The stark stage, with large white panels and black chairs combined with a
masked cast clad in gray, is very effective. The neutral palette not only
enhances the ghostly quality of Joe’s hazy memory, but it also allows the cast
to become a part of the media machine; they become the black and white
newspaper clippings that pop off the screen as Joe becomes a victim of
propaganda. The cast’s recurring stage direction to freeze in time
creates photographs frozen in place as Old Joe reflects on the event before
him. The cast also behaves as ghosts; stoic figures that seem to float across
the stage as wisps of Joe’s memory ebb and flow through his mind.

Time changing can be difficult to execute on stage; however, Leon Major and
the production team accomplish it deftly. The dim lighting with swirling smoke
effects places us in Old Joe’s disoriented dream-world; the
impressionist-like music accompanying Old Joe, freely floating like
Debussy’s PellÈas, adds to the atmosphere as he weaves his way
in and out of the gray figures hovering through his mind. As soon as we are
transported to a specific moment in the past, the stage lights up, masks are
removed, the music finds a solid, upbeat rhythm, and the cast springs into
action, just as quickly as a picture or memory can flash through one’s
mind.

The stage can look quite cluttered at times; each member of the large cast
has their own chair. However, besides adding to the image of Joe’s mind,
cluttered with memories, the use of so many chairs is quite resourceful; they
create the boxing ring and they symbolize the people in Joe’s life. As
memories fade or characters pass on, the chairs are tipped over, symbolizing
their departure. The clutter and confusion works particularly well during
transitions into fight scenes. The movement of people and chairs, along with
sound effects, cheering, and choreographed boxing fights emulates a real
sporting crowd moving, shifting and alive with action. 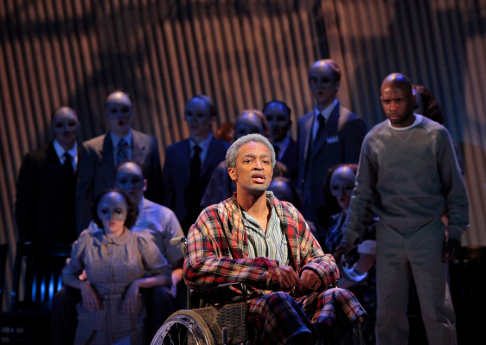 The multi-media components are equally important in shaping the abstract
images of Joe’s mind. Textured panels hung at angles provide a place to
project video clips and photos, which are not merely plastered up on the wall;
they are snippets of images taken from different angles. More importantly, the
panels provide a backdrop for the lighting effects and shadows necessary to
further express the meaning behind the opera’s title. The most effective
shadow moment occurs during Marva’s powerful aria in act two, sung by Adrienne
Webster. As Marva expresses her frustration over loving Joe despite his
infidelity, their shadows reflect her feelings even further: Joe has become a
ghost to her. He is a distant and unattainable shadow of a man who used to be
her husband, someone she now only sees in the news.

Marva’s stunning arias show her complete emotional breakdown as the
relationship develops and falls apart. The first aria, sung in act one, is a
sultry song of seduction; the lilting accompaniment with a slinky saxophone
reflects Marva’s struggle between allowing herself to succumb to
Joe’s sexual desires, while also trying to maintain her dignity. The
second aria reflects her frustration and inability to let go of her womanizing
husband. Both arias are based on the same music; however the second turns into
an agitated cry with ascending chromatics in the orchestra, expressing her
agony and rage about to bubble over. Her arias, much like those of
Nixon’s wife Pat in Nixon in China, allow us to see the powerful
and passionate woman behind the iconic man.

Other memorable characters include two sets of trios. The male reporters
throw Joe on a pedestal when he’s up and kick him when he’s down.
The writing, with its swagger and intense spit-fire text, underlined by angular
pizzicato patterns in the strings, is reflective of a fast-paced news report,
and the three singers, Andrew Owens, Andrew McLaughlin, and Colin Michael
Brush, give stellar performances. Their line “You heard it hear
first” appears many times throughout the opera, each time depicting a
different period in Joe’s life: the excitement of his first fight, the
disillusionment of his loss to Schmeling, the confusion surrounding Joe’s
retirement, and the shock at his death. Three beauties (Madeline Miskie, Amelia
Davis and Amanda Opuszynski) create the other trio and are omnipresent; they
slither and snake around Joe, begging for sex and money. All six pressure and
entice Joe, shaping both his public reputation and the personal choices he
makes.

Additional noteworthy performances include Lillie Brooks, Joe’s mom,
played by a member of the Maryland voice faculty, Carmen Balthrop. Clearly a
seasoned professional, Balthrop sets a fantastic example to the students with
her effortless voice and ownership of the character. Joe’s trainer, Jack
Blackburn, played by VaShawn Savoy McIlwain, is another highlight of the
evening. McIlwain is tough in every sense of the word: his look, his demeanor,
his expression and his voice. The man personifies everything one expects in a
world-class boxing coach – smart, demanding and intimidating.

The chorus plays a rather large role; at times it becomes a character, and
other times it becomes part of the orchestra. Like the music in the entire
opera, their part is extremely difficult to sing. There is very little
repetition, the chords are highly chromatic, and the pitches come out of
nowhere. Additionally, most of their material is sung on neutral syllables,
which can be extremely difficult to memorize. Their role would rival Phillip
Glass’s Einstein on the Beach where the singers repeat endless
arrangements of solfege syllables and numbers. However, the repetitive
minimalist nature of Einstein with clear diatonic sonorities has its
advantages over the atonal harmonies sung by the Shadowboxer chorus.
Many of the leads also need to use a dialect appropriate for their characters,
as observed in operas such as Gershwin’s Porgy and Bess and
Floyd’s Susannah. Learning this opera is no simple task, and the
cast should be commended.

Despite its difficulty, I find the score to be quite remarkable as the
musical layers unfold. When the balance between all the sections is right, the
vocal color of the choir weaves in and out of the texture, reflecting
Joe’s mind weaving in and out of insanity. The score is incredibly
eclectic, combining elements of jazz, Broadway, and atonality, to name a few.
In addition to the pit orchestra, Proto includes a jazz band on stage – a
creative and welcome component to an opera paying homage to the time period in
which Joe Louis lived. One of the many memorable moments with the jazz band
includes an aria by Max Schmeling (Peter Joshua Burroughs), Germany’s
propaganda puppet; it is ironic that Max’s music would be set to jazz,
something the Nazis would have loathed. Like the saxophone used in
Marva’s aria, jazz soloists emerge as characters as Joe continues to lose
his mind in act two; he has a conversation with a trumpet and a saxophone,
thinking they are former boxers talking to him from the grave.

Shadowboxer brings a fresh element to the stage. Sports fans will
love the choreographed fight scenes; history buffs will enjoy the connection to
social and political issues surrounding an epic American character; jazz
musicians will appreciate seeing their art form performed in an
uncharacteristic venue; and opera lovers will enjoy seeing dedicated, talented
students perform this challenging and unique opera.