That idea came to fulfillment this week at the University of
Maryland’s Clarice Smith Center for the Performing Arts. Major, director
of the Maryland Opera Studio, gave this reason for the project’s
prolonged genesis: “I knew that I wanted to do an opera on the life of
this great American hero. The question was—when would I find the right
composer/librettist team to make this work?”

He found that team two years ago. Inspired by the work of Frank Proto,
composer-in-residence of the Cincinnati Symphony, he called Proto to discuss
the project. Soon afterward, Proto and his librettist partner, John Chenault,
were commissioned to write Shadowboxer.

The project that then began to unfold was one of enormous complexity. The
initial focus, however, was a simple question: Joe Louis the boxer was an
American hero, but was Joe Louis the man equally heroic? This issue is the
focal point of the opera and the most poignant element of the production.
Major, Proto and Chenault force the audience to ask itself the question: does
this man deserve my admiration, or even my respect?

It is a powerful question to ask. The opera does indeed pay tribute to the
life of a noble man, a man whom Major, Proto and Chenault all view as a hero.
But their portrayal of Louis shows a battered, broken and unstable invalid,
confined to a wheelchair for the duration of the piece. In fact, the opera
begins with Louis having a heart attack. It then flashes backward in time as a
cast of figures from Louis’s fragmented memory drifts gradually in and
out of focus. This device reveals Louis’s weakness, not his strength. He
becomes a fallen hero as Major forces us to redefine our sense of what a hero
really is.

Chenault uses a variety of figures to add this new dimension to the
character. Similar to the way in which Alice Goodman reveals the human side of
Richard Nixon in Nixon in China, Chenault wants to show the personal
side of Joe. The man had friends, Chenault states, from “all strata of
life. He knew royalty, but he also knew the shoeshine on the corner of the
street.” In Shadowboxer, we see how these different influences
profoundly affected Louis as we follow two main character groups.

The first comprises real people, all of whom were close to Louis: his
trainer, Jack Blackburn; his agent, John Roxborough; his manager, Julian Black;
his wife, Marva; and his mother, Lillie. These characters force Louis to
confront the human element in his life—how his actions, fame, and fortune
affect those around him. We witness the true love of his mother and of his
wife, and the loyal support of his entourage.

In contrast, Chenault also includes a large chorus, composed partially of
different groups of caricatures representing the types of people who had a
negative impact on Louis. There are three beauties, all of whom successfully
seduce Louis and abuse his famous generosity. There are also three fickle
reporters who capitalize on both his successes and his failures. 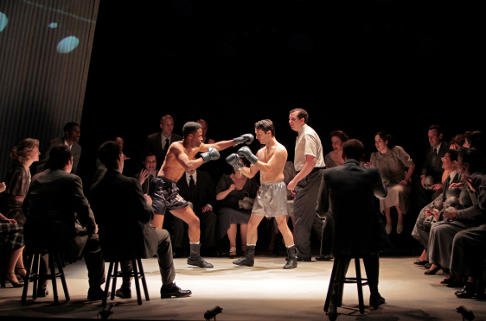 The contrasting elements in Louis’s life are echoed in Proto’s
score. The music to Shadowboxer is extraordinarily challenging. When
the singers received their first version of piano-vocal scores over a year ago,
questions were asked: “Will anyone know if I don’t sing the right
notes?” and even more importantly, “What are the right
notes?!”

These questions arose because the score is mostly atonal, resulting in vocal
lines that are difficult for the singers to navigate, tune and memorize. Chorus
members have the added challenge of having to hold their parts against those of
their highly dissonant neighbors. These parts often enter on a pitch that is
dissonant with the pitches already being sung, without the benefit of an aural
cue from the orchestra. The singers not only meet these challenges, but are
able, despite the atonal crunch, to create a canvas of haunting beauty. The
dissonance that pervades the music adds to the portrayal of the nebulous nature
of Louis’s mind.

Apart from the musical difficulties that result from learning an atonal
opera, conductor Tim Long faced the additional challenge of having to
coordinate the normal pit orchestra, soloists and chorus with an onstage jazz
band, offstage chorus, and onstage jazz instrumentalists. A single conductor
(even with multiple monitors projecting Long’s image to the singers, both
on- and offstage) proved insufficient, so assistant conductor Michael Ingram
was called upon to conduct the offstage groups. Ingram had to watch Long on a
television monitor and conduct — with a glow stick, no less — ahead
of that image, in order for the alignment to sound correctly in the hall. After
many rehearsals spent perfecting the timing, these different musical elements
combine to form a wonderful tapestry upon which the Louis story is told.

Several of the soloists deliver noteworthy performances that deserve special
mention. Carmen Balthrop is captivating as Lillie, Louis’s mother. She
sings a gripping aria about the pain of a mother watching her son do battle in
the ring. With stunning emotional power, Adrienne Webster (Marva) captures the
audience in a fiery aria chastising Louis’s promiscuity.

Jarrod Lee is superior in both his singing and acting as Old Joe, the most
difficult role in the opera. He portrays the frail Louis who watches all of the
action, interacting with the figures from his past as he floats from memory to
memory. Never breaking his intense focus, Lee provides visceral reactions as he
gains insight into his own life. Especially during the second act, a large
musical burden is placed upon the Old Joe character. Lee navigates the
difficult singing with masterful skill, and brings depth and honesty to the
role.

Equally compelling are Major’s directorial decisions. He deals with
the parallel time-frames of the opera in two significant and related ways.
First, he keeps the chorus onstage at all times. This chorus includes the
soloists who portray the opera’s other major characters. Second, Major
masks all of the ensemble members; they unmask only to assume a solo role.
These devices allow Major to deploy a larger chorus, have characters drift into
and out of Louis’s mind in a fluid fashion, and keep the idea of each of
these characters present throughout the work. In this way, Major is able to
manipulate time, seamlessly integrating the present with scenes from
Louis’s past. Major’s masked chorus is an excellent solution to a
difficult problem, and creates a clear picture for the audience.

This chorus creates an especially memorable first scene when it is seated
onstage and Louis wheels his way among its members. As Louis passes, the masked
figures turn and lean towards him, then slowly re-center themselves after he
moves away. This places Louis in a type of purgatory where he is held by
spirits. The journey that we then begin with Louis becomes a necessary one for
him to regain understanding in his life.

The chorus is the first of a series of successful visual elements in the
opera. Costume designer David Roberts artfully dresses each character in varied
shades of grey. The only color is found in Louis’s red-checkered
bathrobe—a subtle and constant reminder that the action takes place in
Louis’s memory. The set is also a unique design that allows for three
hanging screens along the back of the stage. Throughout the opera, the screens
reflect commentary on the action as relevant pictures and video are projected
upon them. Projection designers Kirby Malone and Gail Scott White display
flashes of newspaper headlines hailing Louis’s boxing exploits, quotes
from his competitors that added edge to Louis’s competitive fire, and
swirling smoke during periods where he fights to regain clarity of memory.

The use of projection is sparing, though sometimes too overt. For instance,
at the end of the opening scene described above, each of the main characters
stands and unmasks while his or her name is projected above. The resulting
introduction of the protagonists feels forced, especially given that Chenault
seamlessly weaves character introduction and plot development in the scenes
that follow. The projections are most effective when they add to the liveliness
of Louis’s post- fight celebrations by flashing news headlines and photos
of revelers in Harlem.

Frank Proto and John Chenault’s Shadowboxer pursues a noble
social goal. Like another modern opera, Gershwin’s Porgy and
Bess, it explores the question of race; like Shostakovich’s Lady
Macbeth, it examines the citizen’s relationship to the state. But at
its heart, Leon Major explains, “It is not an opera about a boxer; it is
an opera about a man who makes his living as a boxer.” In
Shadowboxer, we are provided with a transcendent view inside the mind
of a great, and fallen, American hero.