Longtime collaborators Proto and Chenault have written a challenging,
provocative, and somewhat problematic work. It was skillfully produced, despite
some writing flaws: Major and his MOS forces pulled out all the stops, with
many saving effects that supported the sagging score. Chenault devised his
libretto as a series of flashbacks the older Louis has after a heart attack.
The main confusion arose with having three Joes onstage, often simultaneously.
Older Louis watched as Young Joe (played by tenor Duane Moody) re-enacted his
various flashbacks. Young Joe stood alongside older Joe during many scenes,
mirroring his actions or even relating to him, and would blend in and out of
the crowd. Two actors, playing Joe the Boxer (Nickolas Vaughn) and Joe’s
Opponents (Craig Lawrence), mimed several of the famous boxing matches. The
boxing actors brought to the stage the needed raw energy and passion raised
during a fight. One wished for a single person to play Young Joe, who could
also act the boxing scenes, or even one singer-actor throughout the show,
rather than three. Luckily, Major imaginatively guided the interaction of the
three Joes, so the confusion was less apparent.

Unfortunately, Chenault‘s solo lines for older Louis, which are
certainly intended to be introspective, came across as rambling, and
told rather than revealed the character’s thoughts.
Proto’s angular musical lines did not aid these solo sections, but rather
showed an accomplished instrumental composer struggling to set philosophical
words. The result had too many moments of the older Louis singing challenging
intervals, rather than well-crafted vocal lines setting a succinct script.
Fortunately, Jarrod Lee (playing Old Joe) made music and drama out of the
disjointed lines. What a relief near the end of Act II to hear Lee sing a real
tune about life being beautiful!

Proto’s highly complex music includes a full pit orchestra, a
15-member singing cast and a choral ensemble, as well as the unique feature of
an onstage jazz band. The jazz band adds the sound element of the era, not so
much as period music, but as its musical descendant. Timothy Long expertly
conducted the difficult score, and seemed quite at home directing the
club-influenced method of throwing the tune back and forth between the band and
the orchestra. Both ensembles played sensitively, and seemed at ease with the
harmonic and rhythmic language of the score. When the full company was in
action–reliving the fights or relating to each other–the entire production
gleamed with energy. 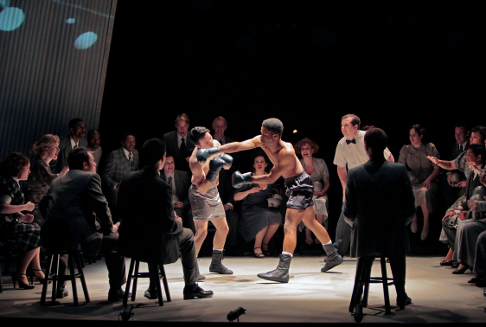 Often wearing faceless, half-skull masks, the choral ensemble acted as a
Greek chorus, singing Proto’s Swingle-Singer-influenced harmonies with
confidence, and often, chilling beauty. They gave voice to Louis’s
memories of the moment. Each singer sat or stood near a black chair,
symbolically lifting it up, turning it on its side, or switching it to another
angle to move in or out of the action. Some of the best music, and the most
notable performances, came from three sets of trios surrounding Louis. (Need we
mention the recurring jazz trio, or even trinity, theme pervading the script?)
VaShawn Savoy McIlwain gave a strong, earthy, no-nonsense performance as
trainer Jack Blackburn. Along with McIlwain, Robert King (Julian Black) and
Benjamin Moore (John Roxborough) rounded out this strong trio of men guiding
Louis’s career. The Three Reporters, representing the press (Andrew
Owens, Andrew McLaughlin, and Colin Michael Brush), offered solid vocal
harmonies and acted with appropriate slime as they either kept their racism in
check or pounced on Louis when he lost. The Three Beauties, depicting the wide
variety of Louis’s female companions and sung by Madeline Miskie, Amelia
Davis, and Amanda Opuszynski, melted over both young and old Joe. Their supple
voices blended well, often using a straight vocal tone more akin to musical
theatre or jazz.

Strong lead performances were given by professor Carmen Balthrop, who
portrayed Louis’s mother, Lillie Brooks, with inner dignity, and deep,
maternal emotion; Adrienne Webster (Louis’s wife Marva Trotter), who gave
herself completely to the role with powerful, emotional singing; and Peter
Burroughs, who generated the necessary bravado for German boxer Max Schmeling.
Jarrod Lee gave an outstanding performance as he embodied the aged and broken
Louis. He sang nearly ninety-five percent of the opera wheeling around in a
wheel chair. The logistics and energy of continuing that for two hours was a
feat unto itself. Exhibiting excellent musicianship, he sang the difficult,
angular vocal lines with a commanding, emotional baritone throughout the opera.
Lee is certainly a singer to watch in the future.

Set designer Erhard Rom brought ringside flavor to his stage with an open
floor, the moveable black chairs, and three angular screens suspended from the
ceiling, hugging the up, left and right stage perimeter. Lighting, hung from
crisscrossed girders, added to the angularity of the stage, the screens, and
the musical lines. Spotlights were often boxing-ring square, rather than the
customary round spots. Projection designers Kirby Malone and Gail Scott White
chose images, such as boxing ring corners, old radios, and fight scenes, to
enhance the subtext of the libretto. A memorable effect occurs in Act I: as the
older Louis reminisces about various boxers, each boxer’s individual
picture appears to fade in and out of a swirling fog on the left or right
screens. Kirby and Malone added a moving-picture element several times when a
photo would appear on each screen in sequence, as if it were a film. Often the
cast sang against the actual film footage of scenes from World War II and
boxing matches. This did not distract, but rather enhanced the words and mood
with more of a background visual effect. Fight sound clips were also
interspersed periodically. Near the end of Act II, Louis hears the voices of
boxers Jack Johnson and Muhammad Ali speak to him through an onstage solo sax
and trumpet. Their words flash on the screen as the instrumental voices
“talk.” A tighter conversational script for Joe would have given
the audience a better chance to imagine the other boxers’ words. As it
was, the instrumentalists appearing onstage weakened the dramatic effect.

The life of boxer Joe Louis inspires sober reflection upon the realities of
living in a racist society, then and now. Chenault featured this topic
prominently, and appropriately, throughout the opera. Proto, Chenault and the
entire MOS team have certainly fulfilled Major’s dream to show the life
of “a man who boxed for a living.” They have launched another
complex hero for the opera world to celebrate, and to contemplate.