Directed by Leon
Major and authored by librettist John Chenault and composer Frank Proto, this
work will capture the imagination of opera lovers and sports fans alike.

Shadowboxer tells the story of Joe Louis, the African-American
boxing legend who held the heavyweight boxing title from 1937 until 1949.
Despite widespread racism in the United States during this period, Louis became
a national hero. In his fights against German boxer Max Schmelling in
particular, Louis’s life in the ring came to symbolize the larger
political struggle between democracy and Nazism that was central to World War
II. Thus many Americans tuned in to Louis’s fights in hopes that his
victory in the ring could also signal a political and ideological victory for
America and the Allies. His story came to symbolize something greater than one
man’s journey, and the far-reaching significance of his life was what
first captured the imagination of Maryland Opera Studio’s Artistic
Director Leon Major.

Ask Major about the genesis of Shadowboxer, and he will inevitably
recount his childhood memories of the famous 1938 rematch between Louis and
Schmelling, during which Louis scored a knockout in the first round. Thus his
fascination with Louis dates back many years. In fact, Major had been toying
with the idea of an opera based upon the life of Louis for over two decades
before approaching John Chenault and Frank Proto. Their creative collaboration
spanned a period of roughly two years, and culminated with a series of
performances at the Clarice Smith Performing Arts Center that began on April
17th and runs through April 25th.

Though Shadowboxer is based upon the life of a boxing legend, it is
not confined to the boxing ring. Rather, it is a psychological drama that takes
place in the landscape of Joe Louis’s mind. During the final moments of
his life at his Las Vegas home, an elderly Louis is forced to confront a
barrage of vivid and painful memories that become increasingly fragmented and
incoherent as death draws near. The opera is a portrait of Louis’s final
moments and the nightmarish fantasies that he must grapple with as he reflects
upon his trials, triumphs, and failures. Chenault transforms the life of this
American hero into a sweeping tale of human struggle, victory and defeat,
suffering and joy.

The musical score of Shadowboxer is equally broad in its scope.
Frank Proto drew upon his decades of experience as a composer and performer of
classical music, jazz, and even Broadway show tunes to create a musical
language that is as multifaceted as his musical background. Far from being a
stylistic hodgepodge, however, Proto’s score captures the phantasmagoric
nature of Louis’s consciousness and is an apt musical counterpart to the
drama onstage. Shifting between a dissonant 21st-century idiom and a
jazz-infused style that draws inspiration from American popular music of the
1930s and 40s, Proto’s score reflects the sounds of Louis’s heyday
as they would be remembered in the murky recesses of the boxer’s
deteriorating mind. Under the direction of conductor Timothy Long, the singers
and instrumentalists of the University of Maryland give a compelling
performance of Proto’s imaginative score. 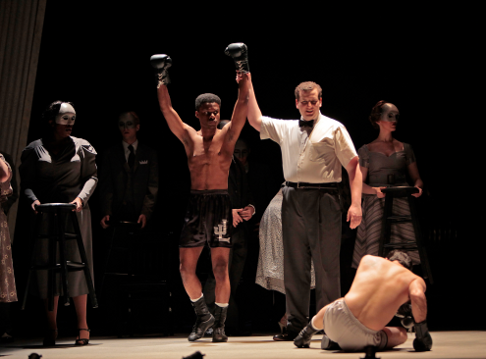 The opera’s intriguing storyline and music should be enough to arouse
curiosity in most music and sports lovers, but for those who are still not
inspired to swing by the Clarice Smith Performing Arts Center this weekend,
Major’s staging of the production should provide further incentive. Major
does not simply approach Shadowboxer using a traditional arsenal of
production tools. Rather, he considers how the cinematic and visual
“literacy” of today’s audience members make them particularly
receptive to the use of multimedia technologies in the performing arts, and he
incorporates those technologies with a discerning eye. Multimedia designers
Kirby Malone and Gail Scott White join forces with scenic designer Erhard Rom,
lighting designer Nancy Schertler, and costume designer David Roberts to create
a synthesis between classic production techniques and modern technologies.

Rom’s deconstructed stage design functions as the ideal backdrop for
Schertler’s expressive lighting, which is used to convey the variegated
landscape of Joe’s mind. At times, Schertler spatters the stage with
dispersed beams of light and shadow, which serve as a visual counterpart to
Louis’s fractured memory. During other scenes, she envelops the stage in
suffocating ashen shades that — combined with grey costumes and a choir
of masked faces––project Louis’s isolation and confusion as
he sifts through hazy memories and painful emotions. Especially memorable is
the scene in which Louis’s wife Marva sings her heart-wrenching aria
“I love the man who isn’t there” immediately after handing
her husband divorce papers. Schertler captures the mental anguish of both
characters by bathing the stage in an eerie red glow. As Marva sings over
martial rhythms played by the orchestra, her towering shadow looms above Louis,
a devastating reminder of the torment he caused her by his womanizing
lifestyle.

The asymmetric shapes and contoured screens of Rom’s stage design also
pair well with the digital projections of Malone and Scott White. Avoiding
naturalistic backdrops in favor of expressive abstractions, Malone and Scott
White create a living world of action onstage. Their projections function as
settings, dreamscapes, and reflections of Louis’s mind. Cloudy images of
black and white shadows communicate Louis’s mental confusion and muddled
memory, whereas projected details of the boxing ring set the scene, without
suggesting a concrete reality. Photographs and newspaper headlines from
Louis’s fights in the years leading up to World War II are juxtaposed
with scenes of the raging war in Europe, thereby indicating how his victories
in the ring were perceived as political and ideological triumphs. In this
manner, the projections become characters in their own right, commenting upon
the action and communicating the far-reaching implications of Louis’s
life in the ring.

Such incorporation of modern technologies in opera is likely to make most
traditionalists uneasy, but Malone and Scott White leave no doubt as to their
artistic integrity. Their incorporation of new media not only enhances the
psychological drama onstage, but also helps to make the production contemporary
and relevant to a 21st-century audience.

Finally, we turn our attention to those artists who breathe life into the
score and libretto of Shadowboxer, the performers themselves. Composed
primarily of singers from the Maryland Opera Studio, this cast of performers
includes many vocalists who will likely have successful singing careers upon
leaving the University of Maryland. This is certainly true of Jarrod Lee, whose
portrayal of old Joe Louis is, without a doubt, the highlight of the show. With
a rich baritone voice that seems to glide effortlessly through even the most
demanding passages, Lee gives a performance that is both musically refined and
poignantly acted. His sensitive portrayal of Louis is the crux of the
show’s effectiveness as a psychological drama. University of Maryland
faculty member Carmen Balthrop also gives a captivating performance and nearly
steals the show with her stirring portrayal of Louis’s mother. Also
noteworthy are Adrienne Webster (Marva Trotter, Louis’s wife) and VaShawn
McIlwain (Jack Blackburn, Louis’s trainer), whose impressive vocal
abilities are matched by their talent for dramatization. Less impressive is
Duane Moody’s portrayal of young Joe Louis. Moody does not convincingly
project the youthful vigor and tenacity of the heavyweight boxer. Furthermore,
his performance emphasizes the boxing champion’s vices, but fails to
effectively communicate his dignity and humanity.

In spite of this single shortcoming, Shadowboxer is well worth the
trip to College Park, and one can only hope that its premiere at the University
of Maryland will inspire future performances. In an era when opera must compete
with mass consumerism and digital technologies, it is refreshing to see a new
work that merges the performing arts with new media, and that explores timeless
themes in more contemporary contexts.

All photos by Cory Weaver/University of Maryland — College Park