Over the long evening we got to know this wall’s every nook and cranny in about every color of light imaginable.
Just when you thought San Francisco Opera got its productions from Chicago this one comes from Palermo (Italy) where its stage director, one Lorenzo Mariani, is the artistic director of the Teatro Massimo. The Italianization of San Francisco Opera is amusing. One can even imagine an Italian operatic mafia that promotes only its own when brokering international deals. This could explain and perhaps excuse the otherwise inexplicable and inexcusable. 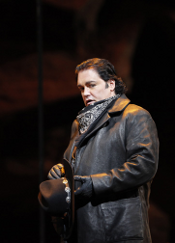 The star of this San Francisco edition of Palermo’s Fanciulla is, no surprise, conductor Nicola Luisotti whose full throated orchestra sang out with delirious abandon Minnie’s true love for the bandito Ramerrez. He pulls us through this evening with orchestral sweep and dramatic point — typical Luisotti.
Mo. Luisotti is indeed a force to be reckoned with. Minnie, soprano Deborah Voight, and Dick Johnson (aka Ramerrez), tenor Salvatore Licitra had no problem at all. Mme. Voight sings her first Minnie, combining a bona fide Americana persona with convincing Italianate singing, cutting loose with high notes as only a dramatic soprano can and here needs to do. Minnie is not the usual Puccini heroine who accepts her unhappy fate. Minnie’s fate is true love that she gains with true soprano coglioni, three aces and a pair, and high notes that simply wither anything that gets in the way!
Salvadore Licitra cuts a fine figure on the stage, the red flag on the back pocket of his Levi’s convincing, the six shooters on his hips menacing . He also sings. His musicianship is impeccable, his phrasing is elegant, and he soars to high notes with ease in his powerful, baritone colored tenor. He should shut up with his retro ideas about opera staging, voiced in an San Francisco Opera Guild preview.
The unhappy, love sick sheriff, Jack Rance, was perfectly rendered by Roberto Frontali who was appropriately emotionally withdrawn though expressive in his brief but revealing soliloquy, and his pleadings to Minnie were touching too. His fine baritone served him just as well when he got mean. Mr. Frontali’s voice, stance and profile would threaten bandits in any spagetti western.
Of the large supporting cast, Timothy Mix [sic] stood out as Sonora, a fine voice and sympathetic, commanding presence, as did young Adler Fellow Maya Lahyani as the Indian Wowkle, the only female voice in the opera other than Mme. Voight. 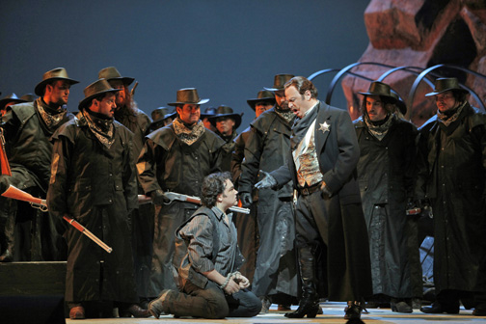 Salvatore Licitra as Dick Johnson and Roberto Frontali as Jack Rance with Brian Jadge as Joe, Igor Viera as Happy, Timothy Mix as Sonora, Austin Kness as Handsome, David LomelÌ as Harry and chorus members
Fanciulla is pure Italian kitsch. For Puccini California was a faraway colorful myth. Mix this with his beloved pentatonic scale (in his mind the perfect sound for California as well as Japan) and with a play that is like catchy short story (winning a guy in a card game). So no one expects a production of Fanciulla to be particularly California.
Nevertheless, evidently scene designer Maurizio BalÚ, like Puccini, has never been to California, because he would know that we do not have funny red brown rocks carved out of foam. Those rocks are in Utah and even there they are not carved out of foam. They turned weirdly blue when it was supposed to be snowing, though the snow was bubbles of some sort rather than flakes. Finally when Minnie and Dick were headed off into the sunset the foam wall turned gold, and split apart revealing a painted drop that was supposed to be, maybe, the Sierras as our plein air artists might imagine them. If this was the idea it failed miserably in execution.
Costumes are credited to American designer Gabriele Berry. The miners’ costumes seemed reasonable in the first act, but in the second act the many men of the posse had all donned identical, sinister, vaguely WWI looking raincoats. For her tryst with Dick Johnson in her cabin Mme. Voight was resplendent in a far too grand Victorian dress that she surely would have shed (but did not) to tease Dick a bit more before she rolled herself up (still in the dress) in a blanket to sleep on the floor (she had given Dick the bed).
Director Lorenzo Mariani moved actors on and off the stage as needed, and platforms holding a bar, a bed and a scaffold as well. When it was time for Minnie to rescue Dick he attempted a coup de thÈ‚tre with Minnie arriving on horseback — a bored, placid palomino was led slowly onto the stage by two keepers. Com’on, hasn’t he even seen Zefferelli’s white stallion gallop across the stage to rescue Leonora in Il Trovatore in Verona? That’s theater!
Provincial Italian opera surely has better to offer than this Fanciulla del West.
Michael Milenski