There are those of us who remember the San Francisco American Conservatory Theater’s Peter Donat as Cyrano and his Roxanne, Marsha Mason, unleashing floods of spellbinding lyricism in the Geary Theater. This was back in the 1970‘s, the mere recollection sets the local Cyrano benchmark impossibly high.
Cyrano the seventeenth century dramatist and Cyrano, Edmund Rostrand’s Belle …poque hero dealt in the spoken word. The rhythm and music is already there. Franco Alfano, a twentieth century post-Romantic opera composer adds only more opulence to Rostrand’s 1898 already opulently verbal masterpiece but he cannot surmount Rostrand’s lyrical flights — his extravagant music simply overwhelms the more modest art form.
Near the end of his long life Henri CaÔn (Massenet’s well-experienced librettist) provided Alfano with this easily workable libretto of Rostrand’s Cyrano, each act with its central lyrical episode surrounded by lively battle scenes. Alfano’s advanced Romantic compositional technique responded to these scenes with music that rivals Meistersinger’s midsummer night’s riot and Otello’s storm, and this complex, descriptive music is indeed effective. But when Alfano wishes to describe emotions his music teeters on the edge of insincerity as its sheer size and sheen betrays all intimacy.
Enter the grand old man of opera, Pl·cido Domingo, veteran of opera’s greatest lyric moments! Though now he is too old to be Cyrano his presence alone is enough to enliven the lyric muse. And perhaps he has always been Cyrano, his art coming so easily to him that it can become real only in the person of another, a character he plays. In the Rostrand Cyrano it is handsome, young Christian who takes his voice. But Domingo is no longer young, and perhaps this does not matter as Rostrand has his Cyrano die fourteen years after this torrid love poetry is spoken, and now, near death most movingly repeated by the aged tenorissimo.
Just last year this Cyrano was produced at the Ch‚telet theater in Paris. It is rare that the Ch‚telet produces, preferring to search out productions of opera and music theater that are famous or infamous and need therefore to be seen in Paris. So this Cyrano was conceived as a boutique production to compete with the rarest and finest of Europe’s opera productions.
It has survived its translocation to San Francisco, no longer a boutique production here but as part of a repertory season. It profits greatly from San Francisco Opera’s superb orchestra that overcame with ease the difficult score and made Alfano’s descriptive music glow at the direction of St. Etienne’s Patrick Fournillier, a Massenet specialist. Both the Roxanne, Ainhoa Arteta, and her lover Christian, Thiago Arancam are from the Domingo cadre. Mme. Arteta provides a lovely figure as Cyrano’s muse but her fine soprano does not possess the beauty of tone one could wish for Roxanne. The same could be said of tenor Arancam who otherwise made a good Christian. 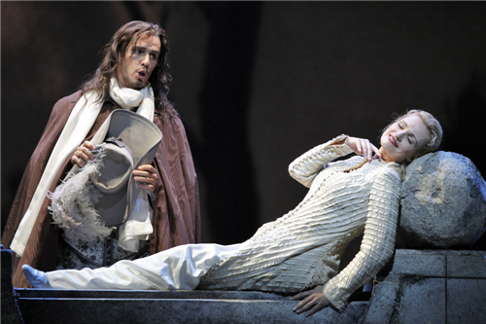 Thiago Arancam as Christian and Ainhoa Arteta as Roxane
The supporting roles may not have a panache equal to their Parisian counterparts but showed San Francisco Opera as a truly fine ensemble company, specifically the villain De Guiche sung by Stephen Powell, the baker Ragueneau sung by Brian Mulligan who here proves that he belongs in character roles, and the lieutenant Le Bret sung by Timothy Mix. The drunken Bojan Knezevic stands out as well, as do Adler Fellows Austin Kness and Maya Lahyani in various roles.
The Ch‚telet Cyrano is above all else cinematic, a style that well fits the swashbuckling Cyrano (well, he did manage some fairly quick moves) with very flashy swordsmanship surprisingly executed without mishap by eight fencing acrobats. The cinematic staging also pointed out the cinematic nature of Alfani’s intimate music, small movements of spirit sonically magnified to full-screen proportion. What was once verismo was by the mid 1930‘s neo-verismo well on its way to becoming movie melodrama.
Romanian opera director Petrika Ionesco staged this Cyrano de Bergerac in the way that Parisians love — nostalgic longing for the bloodiest and the artiest moments of their history, and a dose of kitsch as well. Mr. Ionesco has staged both Aida and Nabucco at the 80,000 seat Stadt de France and The Millennium Project and Continents on Parade at EuroDisney (near Paris). Here is a man that knows pageantry. 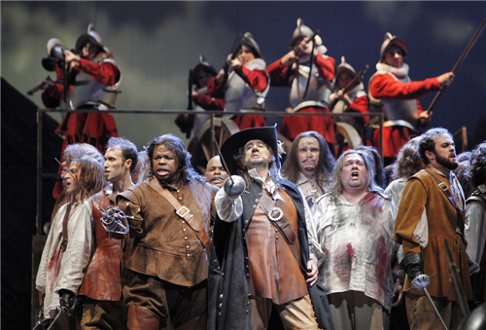 Lester Lynch as Carbon, Pl·cido Domingo as Cyrano de Bergerac and the soldiers
Colorful theater, good opera and one of San Francisco Opera’s finer recent moments.
Roberto Alagna was the Cyrano in the OpÈra National de Montpellier’s Alfano Cyrano in 2008. No doubt a San Francisco debut by this tenor would generate an enthusiasm equal to that of this Domingo return (if not the nostalgia). For the record the Festival de Radio France et Montpellier revived several late verismo operas in the early years of this new century, notably operas by Alfani, Franchetti, and Mascagni.
Michael Milenski