At the end of November Los Angeles Opera brought two productions to the stage of the Dorothy Chandler Pavilion. Debuting first was a new production of Richard Wagner’s Lohengrin, which received one of the most harshly sarcastic reviews from the Los Angeles Times within memory, the writer taking the easy opportunity to equate the premiere over Thanksgiving weekend with the term “turkey.” The Rigoletto that premiered a few nights later earned itself much more a favorable response in the same paper. Seen later in their runs by this reviewer, the impressions were not necessarily reversed, but certainly it can be said that the Lohengrin had settled down into a mostly satisfying show with a few amazing strong points, while the Rigoletto, while enjoyable, provided a decent but not all that memorable night at the opera.
Placido Domingo’s initial year as General Director of Los Angeles Opera began shortly after the terrible events of September 11, 2001, with a new production of Lohengrin. That production was scrapped this season for a new one directed by Lydia Steier, with scenery and costumes by Dirk Hofacker. In Steier’s vision, the action took place in an era reminiscent of World War I, in the ruined shell of a building vaguely governmental or cathedral-like. On a turntable, the set revolved sometimes to place action just outside the over-sized doors to the ruin. Steir has a background in choreography, which was evident in the stylized movement of the Brabant populace — the men either shell-shocked or brutes in uniform, and the women nurses or easy prey for the sexual aggression of the soldiers. In the opening scene, shadow-lit behind a tent, a doctor amputates a leg and seemingly loses the patient — while a nurse brings out the severed appendage for disposal, another nurse inside the tent places a blanket over the body. After Friedrich of Telramund makes his accusation of fratricide against Elsa, it is from this tent that Lohengrin emerges — in soldier’s uniform, with silver-plating from the knee down on one leg.
Clearly Steir is playing with the libretto’s mixture of the miraculous within the context of a militaristic society. Those who complained that a swan never appeared, therefore, had to have ignored the flags of victory festooning the stage in act three — Lohengrin’s prosthetic leg of metal emblazoned on some and a swan on the others. Ultimately, a viewer of any production can decide how deeply he or she wants to consider a director’s vision — in this case, anyone ill-disposed to directorial insight would be expected to dismiss the staging as nonsense, while those more open to alternative visions can decide for themselves whether Steier’s ideas came together or never quite melded into a coherent presentation (and probably an under-rehearsed opening night led to the unfortunate notices referenced above). At any rate, the production had some lovely moments, as snow fell over the ruin and the backscreen projections provided sweeping views of a devastated landscape beneath glowering but gorgeous skyscapes. In a nicely managed theatrical coup, Lohengrin disappears at the end back into the tent from which he emerged, and a moment later, the tent comes down to reveal Elsa’s brother standing on the hospital bed. 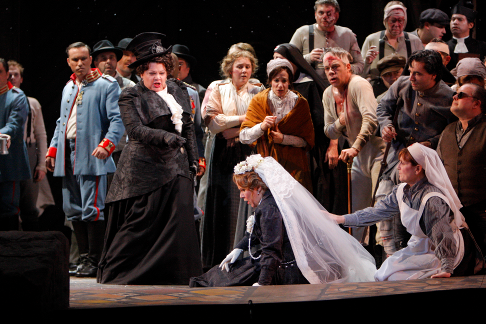 Dolora Zajick as Ortrud and Soile Isokoski as Elsa
Ben Heppner’s career has been dogged in recent years by vocal struggles, and he started the evening with an unsupported, wobbly voice that disheartened anyone hoping for a “comeback” evening. He slowly recovered a fair amount of control, and though the voice never reached the beauty of his best years, he was doing quite well until a couple of small breaks in his closing moments diminished his success. The costumes did not flatter him, but otherwise he gave himself over to the concept and portrayed an otherworldly creature who quickly finds himself disenchanted with the more “normal” folk of Brabant.
Soile Isokoski’s overdue debut with the Los Angeles Opera found the soprano in wonderful voice, her gentle Elsa also far from home among the Brabant crowd, and yet not confident enough to give herself over to the man who has come to rescue her. Isokoski’s instrument is not the largest, but in all the big moments the voice was there — controlled yet autonomous, with an aching beauty in the middle. In the classic act two confrontations with Ortrud, Isokoski held her own against the powerhouse performance of the evening, from Dolora Zajick, in an amazing role debut. Zajick’s aggressive top fits the role of Ortrud well, and she threw herself into the strong-willed character’s scheming aggression. Zajick’s tour de force did take away somewhat from James Johnston’s Friedrich, a bit more pallid vocally that one would like, but strongly inhabiting the part of a man grasping frantically at the shreds of his dignity. 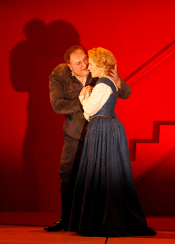 George Gagnidze as Rigoletto and Sarah Coburn as Gilda

James Conlon and the LAO orchestra took a while to settle themselves, the prelude not having the ideal ethereal quality. But when the score let loose, the orchestra was there, and the horns in particular had a successful night. Rigoletto showed Conlon in total command a few nights later, with all the energy matched by a feel for the rare tender moments in Verdi’s masterpiece.
The Mark Lamos production, borrowed from San Francisco, takes the stylistic conceit of appropriating the painter Giorgio de Chirico’s city blocks of ominously muted pastels. The spare sets serve the story well enough, though it seemed odd that minutes-long pauses were required (one in the act on scene change and one after intermission, between the last two acts) when not all that much changed on stage. So in place of interpretation the opera-goer gets a nice looking production, with the important consideration that the sets allow the singers to step forward and project to the audience a great deal of the time.
In the title role George Gagnizde offered a sizable voice and a physique to match one’s expectations. If he lacked that last trace of unique personality that makes for a great portrayal, he still had much to offer. The Chandler audience was as besotted as Rigoletto with his daughter, sung with beauty and taste by Sarah Coburn. In a house not always known to be friendly to lighter voices, Coburn demonstrated that her lyric instrument has an unexpected carrying power. Her Gilda fell for a reasonably good-looking Duke, sung by Gianluca Terranova, who did best with the more energetic numbers that open and close his role. His big act two aria needed more elegance. While not a huge voice, it is ample enough, and he may develop into a more interesting tenor. Andrea Silvestrelli is one of the great Sparafucile’s, his lean physique as perfect for the character as is his menacing, cavernous bass. Kendall Gladen as his sister made the most of her brief time on stage. She has the type of charisma that can make a mezzo a star Carmen or Dalila. 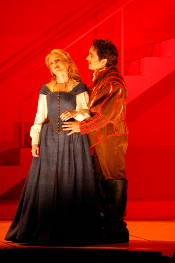 Sarah Coburn as Gilda and Gianluca Terranova as Duke of Mantua

It was a very full and happy house for the Rigoletto, and the mid-week Lohengrin had a substantial attendance as well, and one that mostly stayed until the 11pm conclusion. This year’s shorter season will wrap up by April, after two more productions. In a few weeks, the announcement of the 2011-2012 season for the Los Angeles Opera will reveal just how well the company has come through some times bordering on, if not encroaching into, the desperate. But at least on the stage, as of this December — this is a strong and forward-looking company.
Chris Mullins

All photos by Robert Millard courtesy of Los Angeles Opera