Therefore it makes me a bit uneasy to report
that the latest Met revival features the best all-around cast the company has
fielded (theatered?) all season, nearly flawless from top to bottom, no one
vocally out of her or his league, everyone suited to the scale of the work and
to singing it at the Met—at least when Simon Rattle is in the pit,
keeping the evening in flawless balance. 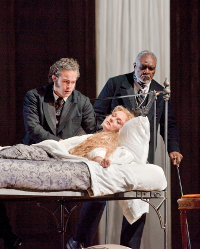 Magdalena Koûen· as MÈlisande, Gerald Finley as Golaud and Willard White as Arkel

Jonathan Miller’s production removes Maeterlinck’s tragedy from
the mystical, pre-Raphaelite mists in which the playwright set it to a definite
location: an English country house in the Merchant-Ivory style. Miller’s
feeling seems to be that we have forgotten the once-upon-a kingdoms of fairy
tale, that we nowadays have similar half-sensual half- memories related to the
forgotten refinements and restraints of the turn of the century world. This
does not always fail of its proper effect, though killing with broadswords
seems a little strange. I do not quite understand why MÈlisande, first
discovered in a Jungian wood far from the rest of the action, weeping into a
forest pool, is already within the walls of the house. Surely her tragedy, in
part, is that she begins and remains an outsider? For Miller, evidently,
“Allemond,” the name of Arkel’s kingdom, is truly
all-the-world, and just as there is no place to flee, there is no outside for
MÈlisande to have come from.

The singers, an extraordinary ensemble, perform with sensitivity and grace.
Every sound they make is musically grateful and lulls one into the texture of
Debussy’s tone poem. StÈphane Degout’s ardent PellÈas is nicely
contrasted with Gerald Finley’s agonized and menacing Golaud. Willard
White and Felicity Palmer give moving performances as the helpless elders Arkel
and GeneviËve. Neel Ram Narajan’s boy soprano reaches all the notes with
perfect support and has no trouble filling the house. He is often called upon
to “witness” the actions of the incomprehensible adults, and he
acts bravely. (In one clever Miller touch, Yniold’s scene with the
Shepherd becomes a nightmare, sing in bed.) 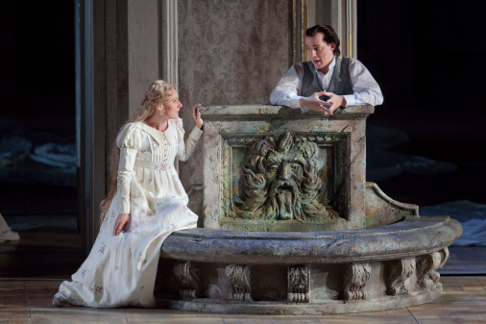 The one member of the cast who did not seem quite acclimatized with the
rest, perhaps appropriately, was Lady Rattle, Magdalena Kožen‡, who sang
MÈlisande, that quintessential outsider. It was easy to put her accented French
down to the character’s foreignness; this did not bother me at all. More
awkward was her air of conscious coquetry, of flirting with PÈlleas, of
manipulating those about her. This is not appropriate to MÈlisande
whose innocence is precisely the keynote of her character. Kožen‡ stares,
as required, at the actions of others, but her stare does not seem to imply
wonder or puzzle; simply a languid lack of interest. Innocence is a commodity
that Maeterlinck’s admirers longed for, missing their pre-Freudian,
pre-Darwinian youth perhaps; if we can no longer believe in it, we still must
have a MÈlisande who incarnates it to perform the opera properly.

The hero of the evening, shining despite the brilliance of so extraordinary
a group of singers, was conductor Sir Simon Rattle in his Met debut. His
PellÈas et MÈlisande was of so measured a pace that the moments of
rising tension, imminent violence, came upon us with an almost shocking
suddenness and, as the stage action remained calm, tied us more closely to the
internal states that the score tends to paint in any case. His sureness and
lightness of touch permitted the singers to project conversationally without
any strain or push. He brought us to our feet.

All photos by Ken Howard courtesy of Metropolitan Opera